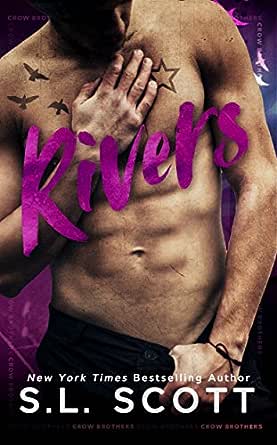 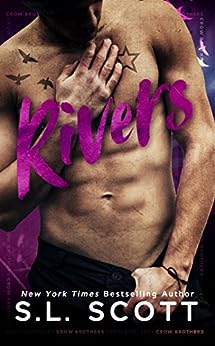 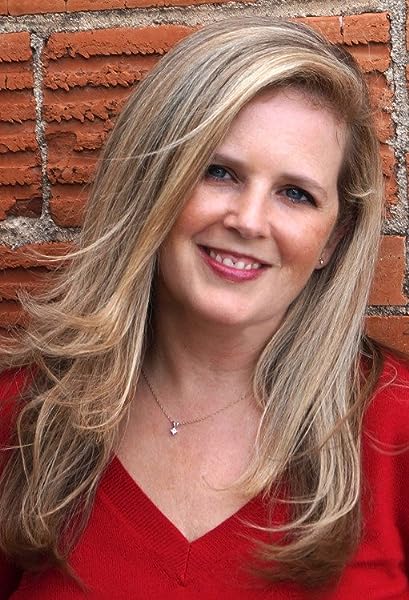 This Standalone Second Chance Rock Star Romance by New York Times Bestselling Author, S.L. Scott, will have you falling in love with Rivers Crow while introducing you to his Sexy as Sin brothers and band mates—Jet, Tulsa, and Ridge.

Rivers Crow has everything he could ever need—a rock star life, more money than the devil himself, and worldwide fame. Except he’s still missing the one thing he wants—the girl he left behind.

Stella Fellowes has a life she doesn’t want—an unfulfilling job, debt without a ceiling, and lonely nights she spends pretending not to miss the one thing she needs—the boy who broke her heart.

Five years later, the guitarist she once loved is back with a hit record, millions of fans, and that look in his eye that still makes her weak in the knees. Only she’s not the same girl he once knew.

When these two star-crossed lovers come together, time starts to heal old wounds. Although she’s compelled to look past his sins, will he be able to look past hers?

Always interested in the arts, S.L. Scott grew up painting, writing poetry and short stories, and wiled her days away lost in a good book and the movies. With a degree in Journalism, she continued her love of the written word by reading American authors like Salinger and Fitzgerald. She was intrigued by their flawed characters living in picture perfect worlds, but could still debate that the worlds those characters lived in were actually the flawed ones. This dynamic of leaving the reader invested in the words, inspired Scott to start writing with emotion while interjecting an underlying passion into her own stories. Living in the capital of Texas with her family, Scott loves traveling and avocados, beaches, and cooking with her kids. She's obsessed with epic romances and loves a good plot twist. She dreams of seeing one of her own books made into a movie one day as well as returning to Europe. Her favorite color is blue, but she likens it more toward the sky than the emotion. Her home is filled with the welcoming symbol of the pineapple and finds surfing a challenge though she likes to think she's a pro. Instagram: https: //www.instagram.com/s.l.scott/ Website: http: //www.slscottauthor.com/ The Scott Scoop: http: //bit.ly/2TheScoop Facebook: https: //www.facebook.com/slscottpage

Sonia Chapple
TOP 500 REVIEWER
5.0 out of 5 stars An exceptional read!!!
26 July 2018
Format: Kindle Edition
Rivers is an emotional ride filled with love and laughter but also a few gut wrenching scenes.
It is sooo hard not to fall in love with the three Crow brothers and their stories.
Rivers can certainly be read as a stand alone but I recommend reading all three books because they are so good and you will really get to learn about them and see the loyalty they have for one another.

Rivers will take you on an emotional rollercoaster of a ride.
This is a love story with 2 beautiful people - Rivers & Stella seeking redemption for sins that they were not responsible for but kept them apart.
Rivers is a hot, sweet, protective and a sex rock god who’s only regret is walking away from Stella. His heart has never recovered and despite being a rock god who can have any woman ... the only one he can’t stop thinking about is Stella.
Some parts were kinda tough and painful to read but even through all of their hardships .... it is sooo worth it!!!
If you haven’t read Spark or Tulsa’s stories I highly recommend you read them.
Rivers is another beautifully crafted story!!!
* I voluntarily reviewed an advanced reader copy of this book *

Trish Sutherland
5.0 out of 5 stars A True Second Chance.
27 July 2018
Format: Kindle Edition
I love Jet and Tulsa Crow but Rivers is the one that will grab your heart and never let go.
Rivers is the third book in the Crow Brothers series by S L Scott and for me the one that stands out. Intensely heartbreaking and emotionally uplifting this book is one of past mistakes, unknown truths, gut wrenching choices, trust and finding the other half of your soul.

S L Scott has written Rivers story to perfection. A man lost in heartbreak and guilt. The blame he feels for all he has lost in the past and now his determination to get back the one person who has made it impossible for him to move forward. That same person who holds the key to his heart and soul and the only one who can heal the ache there that resides and won’t leave.

Stella is a beautiful soul with a loving heart but the hurt and the shattered trust that she believes was inflicted on her five years ago has left her heartbroken. Choices she has been forced to make since then have left her broken and numb.

When Rivers and Stella reunite the chemistry is electrifying, the passion all consuming and the love even stronger than it was before, but will trust and the knowledge of what has been sacrificed in the past be the catalyst that tears them apart forever? You will just have to read this story to find out and I can guarantee you will not be disappointed.

S L Scott has shown her heart and soul in this book. The ability to draw you in and have you feel like your apart of this book is so breathtaking and overwhelming. But trust me it is a journey well worth taking. This is five stars from start to finish.
Read more
Helpful
Comment Report abuse

ReadingfortheLoveofBooks
TOP 1000 REVIEWER
5.0 out of 5 stars A second chance full of suspense, twists and turns.
29 July 2018
Format: Kindle Edition
Wow, I just love this book, but how can you not enjoy the Crow Brothers. I was so looking forward to Rivers story and the author did not disappoint me. What would you do if your ex-turned back up after five years?
The flow of this book was wonderful and even if you have not read any of the other two books you can still fully appreciate these great characters. It's full of love, hate, trust, misunderstanding, forgiveness, suspense, lies, loyalty, family but most of all a second chance. I read this ARC copy of this book and this is my honest and voluntary review.
She was my everything.
Until she wasn't.
5 years he has stayed away he has everything he ever dreamed of all but the one thing his body craves.
Stella Fellowes had done what she needed to do for herself and her family and is finally getting on with her life. Until the one person she never wanted but always dreamed would return Rivers.
Read more
Helpful
Comment Report abuse

Claypot2850
TOP 50 REVIEWER
4.0 out of 5 stars Loved this One!!
26 July 2018
Format: Kindle Edition
I loved this beautiful story. I am a serious sucker for a broken rock star. I have been looking forward to River's story and I was not disappointed!! I absolutely loved River and Stella's second chance at love. It is not an in your face, action packed read. It's an emotion packed, chemistry filled read. You could feel their love story and their pain. Stella was a character that I felt very protective of and River was so in love with her it was painful at times that they were apart. It's a great read and I look forward to the next book in this series.
Read more
Helpful
Comment Report abuse

Rebecca H Hayes
5.0 out of 5 stars Star of my heart
26 July 2018
Format: Kindle Edition
RIVERS EAST CROW OWNS MY HEART OMG!
I didn’t think I could love anyone like Jet and then Tulsa but holy hell.
Rivers's book is sensational. It definitely is Suzie’s best.
The twists and turns are mind blowing and just when you think everything is going to go according to the plan it doesn’t and that’s what makes this book the absolute bomb!!!
It's heartwarming and heartbreaking at the same time.
Both Stella and Rivers are meant to be.
Read it! You won’t regret it!
Read more
Helpful
Comment Report abuse
See all 5 customer reviews
Write a customer review

Go to Amazon.com to see all 184 reviews 4.7 out of 5 stars
Get FREE delivery with Amazon Prime
Prime members enjoy FREE Delivery and exclusive access to movies, TV shows, music, Kindle e-books, Twitch Prime, and more.
> Get Started
Back to top
Get to Know Us
Make Money with Us
Let Us Help You
And don't forget:
© 1996-2020, Amazon.com, Inc. or its affiliates