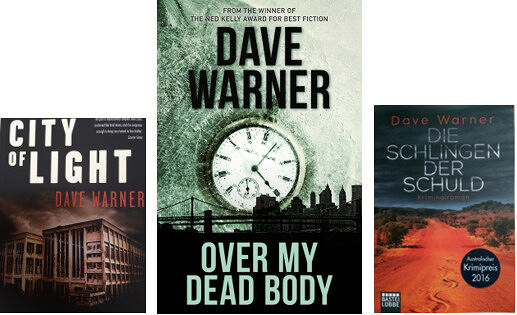 by Dave Warner (Author)
4.2 out of 5 stars 22 ratings
See all formats and editions
Sorry, there was a problem loading this page. Try again.

Page 1 of 1 Start overPage 1 of 1
Previous page
Next page
Start reading River of Salt on your Kindle in under a minute.

In 1963, former hitman Blake Saunders flees the Philadelphia Mob for a quieter existence in a tiny coastal Australian town.

Dave Warner is the author of a number of novels and non-fiction books. He also writes for the screen, where he has produced feature films and television credits. He led the band Dave Warner from the Suburbs which released a number of acclaimed albums in the 1970s and 80s.

Robert Hitchins
TOP 1000 REVIEWER
4.0 out of 5 stars It’s All There
Reviewed in Australia on 4 May 2019
Verified Purchase
The author is not an international cricketer recently returned from the cold, but a West Australian Arts graduate turned singer/songwriter who enjoyed his 15 minutes on the national stage back in the 1970s (remember them?) as a pioneer of “Australian suburban rock” with the aptly named Dave Warner’s From The Suburbs. Think Hilltop Hoods for the pre-hip-hop era.
Since then, he has written for the stage, television, films, newspapers (remember them?) and radio and published 9 novels. City of Light (1996) won the WA Premier’s Literary Award.
River of Salt begins in Philadelphia in 1961, where we meet Blake, an unlikely mob hitman. I say unlikely because he looks like this:

Following an unfortunate incident involving his brother, our boy heads west. After deciding California is not far enough, he ends up in a mythical coastal town on the far north coast of NSW where he runs a bar/restaurant and plays surf rock on the guitar, as you would.
Things are ticking along nicely (business profitable, casual sex aplenty, surfing every day) until some extortionists try to squeeze Blake (bad move). Then there’s a gruesome murder in a nearby town. The cops pin it on a local beach bum poet. Sure he’s innocent, Blake investigates, employing his unique skill set to good effect.
Convincing evocation of the era in the main, the social mores in particular. (I’d just started primary school; I wasn’t into the surf scene.)
Good pace, enough action without overdoing it, some twists and turns. It’s all there.

OzArtiist
5.0 out of 5 stars Another Firecracker of a Story
Reviewed in Australia on 15 April 2019
Verified Purchase
Blake Saunders, a Mob hitman whose conscience gets the better of him flees Philly to run a bar on the mid north coast of NSW in 1963. 1963, the year sex was invented (or so thought the first wave baby boomers), the Beatles began to replace the surf sound, JFK was assassinated and families huddled around their Pye TVs, is brilliantly captured by Warner. Throw in standover merchants, a murder most foul, a corrupt local copper with a heart of gold, a soupçon of romance and watch Blake Saunders cook with gas! A page turner, elegantly written and with a great ending. Who could ask for more - to quote PJ O’Rourke - “better than literature”.
Read more
Helpful
Report abuse

Jeff P
5.0 out of 5 stars A thought provoking and entertaining read
Reviewed in Australia on 23 April 2019
Verified Purchase
A well constructed and I teresting story. Can we really change? Or are we the product of our past experiences. Entertaining and thought provoking.
A great read. If you enjoyed The Dry or Scrublands you will love this. The best from Dave Warner get!
Read more
Helpful
Report abuse

Kylie D
TOP 100 REVIEWER
4.0 out of 5 stars An Enjoyable. Quick Read
Reviewed in Australia on 6 April 2020
Former Philadelphia hitman Blake Saunders escapes the mob after the death of his brother, and winds up on the New South Wales north coast. Spending his time surfing and in his bar The Surf Shack life is idyllic, until a woman is murdered, and some local goons start to try to strongarm Blake. When his friend is arrested for the woman's murder, Blake finds all his skills from his mob days coming back to him.

I found River Of Salt to be an enjoyable, quick read. With believable characters and setting, and an intriguing plot, I will definitely be keeping my eye out for more of this author's work.

David
5.0 out of 5 stars A surprisingly sweet novel
Reviewed in the United States on 12 June 2019
Verified Purchase
Dave Warner has written a series of more or less contemporary mysteries set on the west coast of Australia; this one moves to the east coast and shifts the period to the 1960s. As with his other books, this one features strong character development and a rich sense of place. He does a great job capturing Australia in the 1960s, particularly its music (and as a musician, the author knows this subject well). The mystery is well constructed, but it's his characters and setting that that make this a very entertaining read.
Read more
One person found this helpful
Report abuse

borneveryminute
5.0 out of 5 stars Epic story-telling
Reviewed in the United States on 23 August 2020
Verified Purchase
Dave Warner has skipped across to the east coast for this clever crim story of a hero blighted by tragic flaws, mostly of his own making, as he is eaten away by guilt from his past
Read more
Report abuse

Patricia Crook
4.0 out of 5 stars River of Salt
Reviewed in the United States on 11 October 2019
Verified Purchase
Good read. A little confusing for me at first, but as I got deeper into the book, the more I enjoyed it. I would recommend it to anyone.
Read more
Report abuse
See all reviews
Back to top
Get to Know Us
Make Money with Us
Let Us Help You
And don't forget:
© 1996-2021, Amazon.com, Inc. or its affiliates