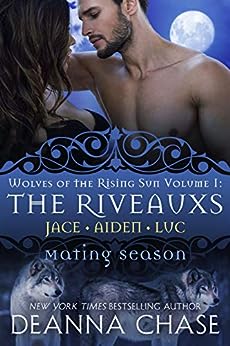 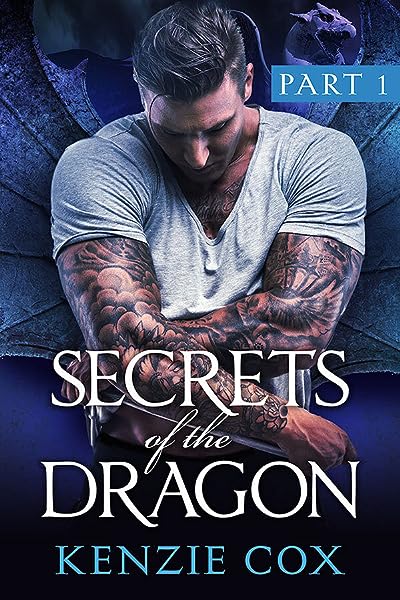 4.0 out of 5 stars
4 out of 5
122 global ratings
How are ratings calculated?
To calculate the overall star rating and percentage breakdown by star, we don’t use a simple average. Instead, our system considers things like how recent a review is and if the reviewer bought the item on Amazon. It also analyses reviews to verify trustworthiness.

HelenGee
TOP 1000 REVIEWER
4.0 out of 5 stars Hot Hot Hot
Reviewed in Australia on 3 July 2017
Verified Purchase
And I don't mean just the climate. These three stories are seriously good. Three brothers (wolf shifters of course) and their fated mates must face obstacles before their love and happy ever afters can occur. Sibling rivalry of course is involved and the protective instincts of the pack rise above all else. Add in three very strong women and fireworks explode. Great to read over a lazy weekend.
Read more
Helpful
Report abuse

Kristy Heinicke
5.0 out of 5 stars The Riveauxs all in one place!!
Reviewed in Australia on 19 May 2016
I was gifted these stories individually from Kenzie Cox, in exchange for my honest review.

Jace, book 1....
I have just finished reading Jace's story, I was quickly drawn into the story & was surprised when I'd already finished it.
Skye finds comfort in the Bayou, especially around Jace, having just broken up with her boyfriend she wants to take pictures & relax. But when a storm breaks & Skye finds herself in a cabin with him....
I loved how things progressed between Jace & Skye, it made for an enjoyable short read.... why do these stories have to be so short??

Aiden, book 2....
I was quickly sucked back into the lives of the "Wolves of the Rising Sun" & then just as quickly I was spat out.... I didn't want this book to finish.
Rayna has always been a part of the Riveaux family, her best friend Luc is her all time crush's brother. Aiden is only now letting himself have what he wants, but she's his brothers best friend, but one night changes everything....
I'm absolutely loving these stories, I just wish they were longer, especially with all the action packed inside.

Luc, book 3....
I have been loving this series so far, and 'Luc' was no different than the first two. I was sucked into the story, lost within the words... action, love, mayhem that is the "Wolves of the Rising Sun". I didn't want this book to finish, but then I have said that to all I have read so far.
Luc know's Arianna isn't staying long, she'll be heading home in 2 weeks, so he's making the most of the time he gets to spend, but he's not sure if he can allow her to leave, especially when she knows the secret.... Arianna is enjoying her time with her best friend & Luc, but things happen that make her remember things & run...
I loved how you got a peak at the previous books couples, how they act together now that they're mated.
Read more
Helpful
Report abuse

Elisa
TOP 100 REVIEWER
5.0 out of 5 stars Brilliantly written by a great author
Reviewed in Australia on 19 May 2016
Jace, Aiden and Luc 3 gorgeous brothers who are also werewolves, the own and run a bar in the bayou called wolves of the rising sun, its mating season so look out girls when these guys peg you as their mate you'd better be ready for anything.
Read more
Helpful
Report abuse
See all reviews

SFF Dragon
5.0 out of 5 stars It's Mating Season on the Bayou and for the Riveaux brothers it's the perfect time to find their true mates and get their HEAs.
Reviewed in the United Kingdom on 5 September 2016
Verified Purchase
The Riveauxs: Wolves of the Rising Sun Volume 1 (Mating Season)

I love Kenzie Cox's books and she's one of my favourite authors, but when I originally read the first book, Jace, I didn't know the name and I had no idea what to expect although the style felt familiar and I absolutely loved this series of short, action packed, hot and steamy paranormal romances about the Riveaux brothers, who run their Bayou bar 'Wolves of the Rising Sun' along with tours of the Bayou to make ends meet and find their true mates along the way. This series is also part of the multi-author Mating Season Collection of stand alone paranormal romances which all come with their own happily ever afters and no cliff-hangers.

It's Mating Season on the Bayou and exactly the right time for Jace and Skye to finally be together. Forever. Give me more.

The first book in the terrific Wolves of the Rising Sun series, 'Jace' is a short story which takes place over the course of single day with lots of references about the preceding events. It's a well written paranormal romance with steamy bits, action, a few surprises and a HEA which took me about an hour and a half to read. This was the first book I'd read by Kenzie Cox but certainly not the last. I really enjoyed it. It's written in the first person, not my favourite, but the point of view does change from Skye to Jace for alternating chapters so you get to know what each of them thinks and feels as you read. This was a great start to the new series, and I couldn't wait to read book two.

Photographer Skye has run to her favourite place after splitting with now ex-boyfriend Lannister. The split started five days ago. He was angry that Skye got a tattoo of a wolf, then a couple of days later, he arrived home injured, ordered Skye around and then smashed her head into the wall. Skye packed up her stuff and left Baton Rouge, going to the only place she thought he'd never go. The Bayou, where she felt reasonably safe and the hotter than hell Jace is to be found.

Werewolf Jace Riveaux has wanted Skye since she first walked into his bar on the Bayou three years ago but she was involved with someone, so he let it go. She's been back quite often since then and she's here again, but this time she's single and it's Mating Season. After an afternoon romp, he knows she's his true mate, but then things take a turn for the worse and he's torn about what to do.

I really enjoyed this book and would happily recommend it to anyone.

The Mating Moon works it's magic again, this time for true mates Aiden and Rayna.

I love this series about the Riveaux brothers and their bar on the Bayou and I really enjoyed this book about true mates Aiden Riveaux and Rayna Vincent, who have known each other since they were children and never got together, but this year's mating season is different. Everything changes as they finally start what, on the surface, is a strictly no-strings affair. I'm not going to give away any spoilers, but this book grabbed me on the first page, sucked me in, and didn't let me go until I got to the end.

Although it's written in the first person, something I usually don't like, it didn't really bother me. I was too engrossed in the story to take much notice and it alternates the point of view between Rayna and Aiden every chapter so you know what each of them is thinking and feeling as the story unfolds. It has everything I expect from a good paranormal romance, including action, bad guys to fight, steamy bits, a HEA and no cliffhangers. I loved this book, really didn't want to put it down and couldn't wait to read the next one.

A hero who finally works out he wants to keep the heroine, action, steam, lots of unexpected twists and a happily ever after. I love it.

This series just keeps getting better and better, and by the time I got to this one, I was totally hooked on Kenzie Cox's books.

This is the story of werewolf Luc Riveaux, who operates the family's Bayou Tours business, human Arianna Sims, who's a model, and their rocky road to true mated-ness. Luc has hardened his heart against the idea of a mate since his mother left. Arianna has survived her 'family' being involved in the illegal drugs trade and got out as soon as she could. But, without giving away any spoilers, their worlds are about to hit each other, head on, and the consequences are not what you'd expect. This book has unexpected twists and turns aplenty and I really didn't want to put it down.

There is a background theme in the series, which has formed an integral part of each story and comes full circle in this book. It's all on the wheel, so the bad guys get theirs, but not in the way you might think. I love all the main characters, but my absolute hero of the week is Arianna, with her 'brother' Smoke running a close second. A few new characters, mainly cousins, are introduced in this book and threads are put in place for others.

I love this series which is as much action thriller as it is paranormal romance with it's terrific characters and location, hot and steamy true mate encounters and humour, not to mention the wonderful happily ever afters.
Read more
Report abuse

TinaT
5.0 out of 5 stars Love these books
Reviewed in the United Kingdom on 26 July 2017
Verified Purchase
Wow what can I say, I love shifter reads, and this one packs all the aspects I love, hot shifter men, the women they fall for, sex, romance, amazing plots, twists, turns, angst and HEA's. Highly recommend
Read more
Report abuse

Diz
4.0 out of 5 stars Good read
Reviewed in the United Kingdom on 27 June 2017
Verified Purchase
Yes they are short in comparison to most books but they are a good read.

Each book is about a different brother and finding their mate.
Read more
Report abuse

Sheila
4.0 out of 5 stars Absolutely brilliant
Reviewed in the United Kingdom on 8 December 2016
Verified Purchase
I have read many werewolves /Lycan stories, but this had a different exciting edge to it. Loved how the story continued through the brothers. Loved the drama excellent brilliantly written couldn't put it down.
Read more
Report abuse