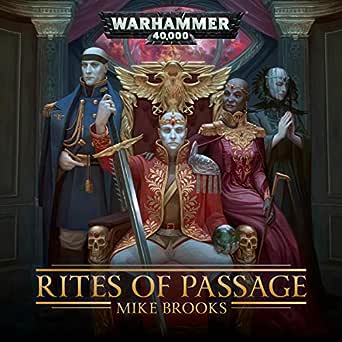 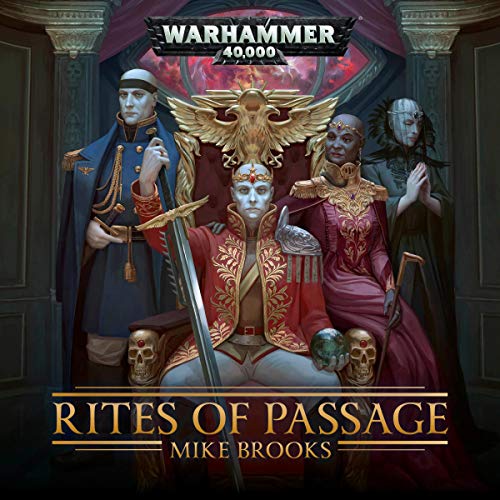 Philip Millar
5.0 out of 5 stars An excellent read, addressing some much need aspects
Reviewed in the United Kingdom on 14 October 2019
Verified Purchase
Read the review by Anon below and it sold me on the book.

Anything that can annoy an obvious incel like that has got to be worth a purchase. What’s more, they definitely hadn’t read it, just going of what other chuds are working themselves up into an impotent fury about. Sad and pathetic little men.

The issue they have is that one minor character in two chapters of the book identifies as neither Male nor female and uses a neutral pronoun. Not the first character in the universe to do some, nothing new. It’s not important to the story, it’s just something ab mout one very minor character. That’s it.

If you realise that the Imperium of Man is a dystopia and a satire of fascism as well as a dark setting then this might well be the book for you.

If you think that women won’t have a place in the far future, then you probably don’t read books anyway so it’s no loss. If you want a book that doesn’t shy away from showing you things that are new to you now but accepted 38,000 years into the future as a simple part of humanity, then you’re lacking in very obvious imagination.

Warhammer is for everyone, always has been, if you were dumb enough not to get the joke, that’s on you. If you think women and minorities are a threat to your hobby, no one wanted to play with you anyway.

Rhodri Morgan-Smith
5.0 out of 5 stars Rites of Passage - thumbs up!
Reviewed in the United Kingdom on 14 October 2019
Verified Purchase
It turned my eyes gay.
Just kidding , this is a very strong novel from Mike Brooks , delving into the murky world of Navigator politics.
Absolutely a must read for all fans of 40k fiction who enjoy stories that are set away from the grimdark battlefields.
(He has received some stick from knuckle heads for having non-heterosexual characters in this book. Yes it’s the 21st century and some idiots still get angry that gay people exist in fiction)
Read more
9 people found this helpful
Helpful
Sending feedback...
Thank you for your feedback.
Sorry, we failed to record your vote. Please try again
Report abuse

Amazon Customer
5.0 out of 5 stars A great book, and a sign of the evolution of 40k narratives.
Reviewed in the United Kingdom on 16 October 2019
Verified Purchase
If you see a review telling you that this book is the 'end of the world' please remember that 40k books began with 'Space Marine' and remind yourself of the content of that book. Rite of Passage is a great read and shows that Black Library is beginning to advance leaps and bounds in how it chooses to engage the dystopian gothic nightmare that is Warhammer 40k - an Imperium that does not care how you identify, because it's focus is far above such petty concerns. This isn't utopian by a long shot but exploring themes in a universe where they are not traditionally explored.

It's nice to see Black Library catching up with the world finally, more of this sort of thing.
Read more
6 people found this helpful
Helpful
Sending feedback...
Thank you for your feedback.
Sorry, we failed to record your vote. Please try again
Report abuse

Kindle Customer
5.0 out of 5 stars A very wonderful book.
Reviewed in the United Kingdom on 15 October 2019
Verified Purchase
Character, plot, wit and vividly bizarre happenings. I love many BL books, and this one was still a breath of fresh air. Memorable and stimulating and not a dull moment.
Read more
3 people found this helpful
Helpful
Sending feedback...
Thank you for your feedback.
Sorry, we failed to record your vote. Please try again
Report abuse

"Mike Brooks' first full-length-novel for Black Library is one hell of a debut; a package full of joy for the weary 40k-veteran, full of engaging characters, politics, intrigue, quirks, twists, suspense and excitement. I've described it on Twitter as "Dan Abnett in Domestic-40k-mode with a healthy dose of Terry Pratchett", and on the chance of setting an impossibly high bar, I stand by that comparison.

The main characters are Lady 'Chetta' Brobantis of Navigator House Brobantis - recently, and quite deliberately, widowed by her own machinations - and opposed to her Radimir Niklau, terrorist and faithful follower of the Dark Gods. They're the anchors to Rites' plot, both through Chetta's troubles in the wake of the death of her late husband as well as Radimir's plan to strike a heavy blow to the Imperium on Chetta's homeworld. Those interact and interweave as the novel goes on, and Brooks cleverly let's the different branches of the story slowly grow together and across in ways that feel appropriately surprising and natural at the same time.

Besides the two great leads, Brooks' peppers his story with a colourful menagerie of secondary characters, from Chetta's scheming relatives, the various associates and servants of House Brobantis and a mysterious rogue traders entourage to a slightly hapless cult that Radimir recruits to assist in his plan.

Brooks earns the comparison to both Abnett and Pratchett not solely through the grounded nature of the story or his sharp-tongued humour, but by showing an impressive attention to detail and care to make even his tertiary characters memorable. He also displays a keen eye for *consequences* - every action of a character has logical consequences for his relationships and the actions and feelings of other characters, even seemingly unimportant ones, something that is often glossed over or forgotten by authors focused more on the big action or their central plot.

Rites Of Passage has shot itself squarely into my Black Library Top 3 of 2019, right besides Peter Fehervari's Requiem Infernal and Aaron Dembski-Bowden's Spear Of The Emperor, and might well be one of my favorite Black Library novels of all time. It was a joy to read from first page to last, a novel that left me with the warm feeling in my gut to have eaten a three course menu that's been cooked with love and care and washed down with a good wine, while hanging out with some new friends."
Read more
One person found this helpful
Helpful
Sending feedback...
Thank you for your feedback.
Sorry, we failed to record your vote. Please try again
Report abuse
Load more international reviews

M. Llaneza
5.0 out of 5 stars Navigators versus Chaos !
Reviewed in the United States on 28 October 2019
Verified Purchase
I enjoyed this one a great deal, highly recommended. Enjoyable characters come together in an unusual combination to save a vital world for the Imperium. There's good action, above average prose for the BL, and memorable characters.

If you aren't sure which 40K novel to pick up next, get this one !
Read more
10 people found this helpful
Helpful
Sending feedback...
Thank you for your feedback.
Sorry, we failed to record your vote. Please try again
Report abuse

Tyler Moore
5.0 out of 5 stars Great read/listen. Highlights the non-war side of Warhammer 40k in a brilliant way.
Reviewed in the United States on 10 November 2019
Verified Purchase
Do you want a murder mystery detective adventure, set on a 40k hive world, where a elderly navigator plots to gain more power for family (and let's face it, herself). Then this book is for you.

The main character of this book, Chetta, is an awesome character to follow. She isn't the normal the 'one man army' 40k protagonist. She is and older non combatant that is better at throwing shade rather than fragmentation grenades. This is a refreshingly different point of view that I wish we had more of in 40k fiction.

Mike also does a little bit of world building in the novel, portraying the imperium as an authoritarian cancer on it's populace, driving it's downtrodden members towards cults and worse. I would put up Mike's ability to expand the darker side of the imperium up with early Abnett and I hope he gets the chance to expand on this.

Just a note here, the rage of other reviewers about certain pronouns/etc is total load of crap. This book is pitch perfect take on the imperium and 'domestic' 40k and I honestly didn't notice what they where talking about until someone pointed it out to me.