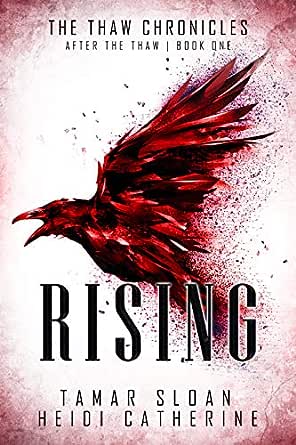 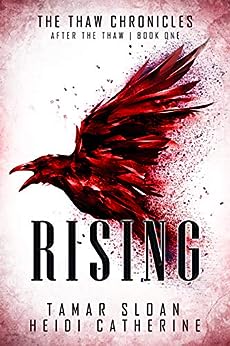 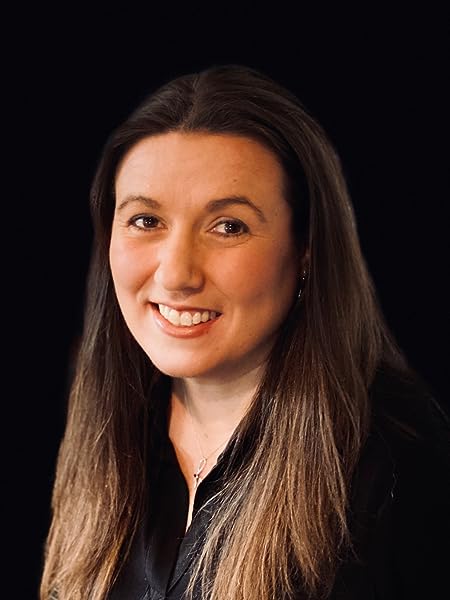 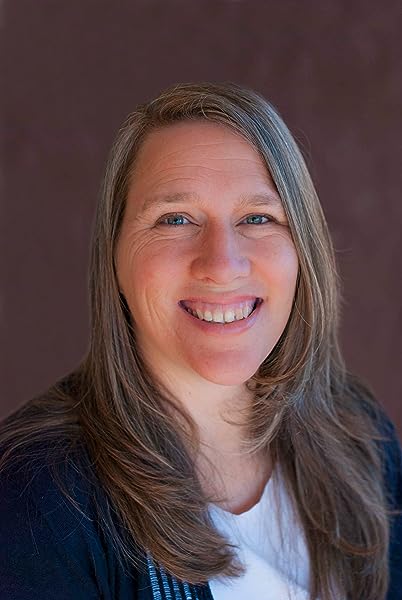 Rising: After the Thaw (The Thaw Chronicles Book 1) Kindle Edition

TracyReads
TOP 1000 REVIEWER
5.0 out of 5 stars So good
Reviewed in Australia on 4 January 2020
Verified Purchase
After reading the prequel novella I knew I was in for a treat and this book totally delivered! This world is very different to our current world and the imagining of the consequences of global warming is vivid, and all too real. Society has evolved and the ‘Proving’ which all teens must face to determine their place in society is both inventive and dangerous.
The story revolves around 4 teens, and Wren and Dex are without doubt my favorites. Although Kian and Nova are right up there too! I mean, really, how can I choose?
The book ends on a cliff hanger which leaves me grateful that book 2 is only a few weeks away!
Excellent writing, vivid landscapes, and characters that feel more like my best friends now I’ve been through so much with them.
So good.
Read more
Helpful
Comment Report abuse

Helen Hazlewood
5.0 out of 5 stars A compelling read!
Reviewed in Australia on 3 January 2020
Verified Purchase
Wow, what an absolute rollercoaster ride this book is! Tamar and Heidi take us on a gripping journey through a dystopian universe that feels worryingly feasible given our current climate change issues. The characters really draw you into their world. I found myself so emotionally invested in their lives that I felt compelled to keep reading when I really didn't have time! The plot is full of agonising twists and moral dilemmas that had me holding my breath at times with anticipation!
I have loved everything that both Tamar and Heidi have written, but was a little dubious about how a jointly-written book would work. Thankfully my fears were unfounded as this story is seamlessly written and showcases the excellent style I've come to expect from both authors. I can't wait to read the rest of the series!
Read more
Helpful
Comment Report abuse

Tizzi
5.0 out of 5 stars Imaginable turn
Reviewed in Australia on 3 March 2020
Verified Purchase
Omg I did not see that coming. Wow what a twist. There is no way that they would do what the High Bounds did to the Unbounds.
Read more
Helpful
Comment Report abuse

Elhamy
5.0 out of 5 stars Dystopian fans will love this series
Reviewed in Australia on 20 January 2020
Verified Purchase
Great dystopian novel. I am hooked. I can't wait for the next book. Loved the characters especially Wren and Dex.
Read more
Helpful
Comment Report abuse

Sandra Muller
5.0 out of 5 stars A fast-paced academy-style adventure set in a dystopian future
Reviewed in Australia on 13 January 2020
I loved this book even more than the prequel 'Burning'. In Rising, the children of the characters in the prequel undertake their 'Proving', a series of tests of their skills and character to determine if they will be 'bound' or 'unbound'. The group dynamics worked well, especially with Wren, the first Remnant to enter Askala upsetting the action. The plot twisted and turned into some surprising and heartbreaking areas. A really good read. I can't wait for the next instalment.
Read more
Helpful
Comment Report abuse

Liz V
TOP 1000 REVIEWER
5.0 out of 5 stars Wow dystopian adventure great read
Reviewed in Australia on 3 January 2020
This book was amazing there were so many twists and turns and unexpected happenings. Fantastic new world can’t wait to see what happens next. I reviewed an arc copy of this book with no obligation to review.
Read more
Helpful
Comment Report abuse
See all reviews from Australia

Kindle Customer
5.0 out of 5 stars Action-packed awesomeness!
Reviewed in the United Kingdom on 21 February 2020
Verified Purchase
WOW. Rising has been a journey and a half... and then some! This is edge of the seat fantasy at its best, with a complex, twisty plot and a convincing array of characters - some more loveable than others! - that'll have you turning the pages way past bedtime. That ending... ohemgee! I don't think I've ever used so many exclamation marks in a book review!!!!!!!!!!!!!!!!!!!!!!!!!!!!!!!!!!!!!!!
Read more
Helpful
Sending feedback...
Thank you for your feedback.
Sorry, we failed to record your vote. Please try again
Report abuse

Stephanie Lynn
5.0 out of 5 stars So Good!
Reviewed in the United States on 24 January 2020
Verified Purchase
I've been on a dystopian kick lately, I actually read mostly dystopian along the lines of this series last year, and yet I still can't get enough, especially those that stand apart and really shine. This is one of those! I can see The Hunger Games, but that was never my favorite of the genre, and one I found last year, Becky Moynihan's The Elite Trials is more what I'd compare it too (also one of my Top Favorites!), or even like Ashley Maker's book Seer, with the intensity of Ash Princess by Lauren Sebastion.

I love books like this, that can't even really be explained or compared truly based on other books, it really is a story that is unique and original, fast-paced, and well executed while still hitting all the things I want in the genre, fast-pace, high stakes/plenty of danger, complex characters with questionable agendas, and all the struggle and unfair political intrigue that makes dystopians so exiting, this one is all that, and so much more. I'm so glad I started my year with this one, might easily be one of my favorites (of all time, not just for 2020, and we aren't even a month in!).
Read more
3 people found this helpful
Helpful
Sending feedback...
Thank you for your feedback.
Sorry, we failed to record your vote. Please try again
Report abuse

DDsea
2.0 out of 5 stars Nope
Reviewed in the United States on 4 March 2020
Verified Purchase
Admission; as a teenage post apocalypse, this not my genre. I don’t know why I bought and read this book but someone must have spoken highly of it. Hard to know why. The dialogue is banal and clumsy. The editing is poor with mistakes that should have been easily detected. I will not be moving on to the second in the series. There is nothing of interest to entice me to do that.
Read more
3 people found this helpful
Helpful
Sending feedback...
Thank you for your feedback.
Sorry, we failed to record your vote. Please try again
Report abuse

Sherry C.
5.0 out of 5 stars Amazing dystopian journey into adulthood
Reviewed in the United States on 4 January 2020
Verified Purchase
Really good dystopian book. Yes, it will put you in mind of Hunger Games or Maze Runner but the storyline and world building is unique and inventive. The characters are so well thought out and developed. Wren, Dex, and Nova are my favorites, but Felicia makes it hard to cast her aside as a favorite too. Plot starts off at a walk but escalates to a sprint fairly quick. The "proving" is intense. Really, really intense. There are scenes with unexpected events; in fact I felt the entire story was rather unpredictable. Killer cliffhanger ending! So good! It's a must read!!
Read more
2 people found this helpful
Helpful
Sending feedback...
Thank you for your feedback.
Sorry, we failed to record your vote. Please try again
Report abuse

Tamara Kasyan
5.0 out of 5 stars Rising To The Challenge
Reviewed in the United States on 4 January 2020
Verified Purchase
The prequel, Burning, introduced you to Askala, and in Rising you get to experience a Proving through the eyes of some of those characters' children as well as a surprising new comer. These 4 teens will face challenges that test their abilities, put their survival on the line, and ultimately determine their fates. Suspense, action, and budding romance fill the pages as twists and secrets draw you into this story. Some characters you will like, others you will hate, but regardless, you'll find yourself rooting for these teens to succeed. Told from Kian, Nova, Dex, and Wren's viewpoints you get to see how each of them feels as the book takes you on a journey that the results of which will effect all of their lives. Ending on a bit of a cliffhanger, I can't wait to see what the future holds for these four and how they will face the challenges ahead of them in the rest of the series.
Read more
Helpful
Sending feedback...
Thank you for your feedback.
Sorry, we failed to record your vote. Please try again
Report abuse
Load more international reviews

Michelle Titherington VanDaley
5.0 out of 5 stars Starting The New Year With A 5 Star Read
Reviewed in the United States on 5 January 2020
Verified Purchase
With characters that evoke so many emotions while reading and descriptive world Building that allows the reader to easily visualize the story taking place this is sure to be one of my fave series of 2020! Action, suspense & a dash of romance this is a must read for all dystopian, urban fantasy fans. Excited to see what happens next
Read more
One person found this helpful
Helpful
Sending feedback...
Thank you for your feedback.
Sorry, we failed to record your vote. Please try again
Report abuse

Nancy
5.0 out of 5 stars Awesome book!
Reviewed in the United States on 6 February 2020
Verified Purchase
I have never written a review about a book before. I had to write one for this book! This book is awesome. I couldn’t put it down. All I did was read and I finished it in one day. I can’t wait for the next book. The story was great the writing was awesome. I can’t say enough good things about it.
Read more
Helpful
Sending feedback...
Thank you for your feedback.
Sorry, we failed to record your vote. Please try again
Report abuse