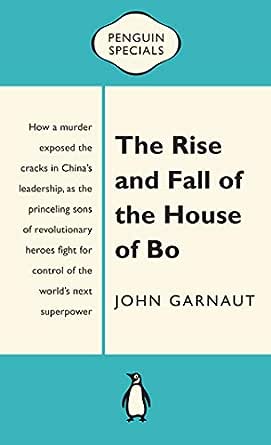 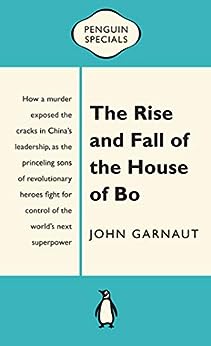 The Rise and Fall of the House of Bo: Penguin Special Kindle Edition

Bo Xilai's breathtaking fall from grace in 2012 is an extraordinary tale of excess, murder, defection and ideological clashes, as the princeling sons of the revolutionary heroes fight for control of China.

When news of the murder trial of prominent Communist Party leader Bo Xilai's wife reached Western attention, it was apparent that, as with many events in the secretive upper echelons of Chinese politics, there was more to the story. Now, as the Party's 18th National Congress oversees the biggest leadership transition in decades, and installs the Bo family's long-time rival Xi Jinping as president, China's rulers are finding it increasingly difficult to keep their poisonous internal divisions behind closed doors.

Bo Xilai's breathtaking fall from grace is an extraordinary tale of excess, murder, defection, political purges and ideological clashes going back to Mao himself, as the princeling sons of the revolutionary heroes ascend to control of the Party. China watcher John Garnaut examines how Bo's stellar rise through the ranks troubled his more reformist peers, as he revived anti-'capitalist roader' sentiment, even while his family and associates enjoyed the more open economy's opportunities. Amid fears his imminent elevation to the powerful Standing Committee was leading China towards another destructive Cultural Revolution, have his opponents seized their chance now to destroy Bo and what he stands for? The trigger was his wife Gu Kailai's apparently paranoid murder of an English family friend, which exposed the corruption and brutality of Bo's outwardly successful administration of the massive city of Chongqing. It also led to the one of the highest-level attempted defections in Communist China's history when Bo's right-hand man, police chief Wang Lijun, tried to escape the ruins of his sponsor's reputation.

Garnaut explains how this incredible glimpse into the very personal power struggles within the CCP exposes the myth of the unified one-party state. With China approaching superpower status, today's leadership shuffle may set the tone for international relations for decades. Here, Garnaut reveals a particularly Chinese spin on the old adage that the personal is political.
See all Product description
click to open popover

Z. E. Lowell
5.0 out of 5 stars An excellent overview
13 September 2013 - Published on Amazon.com
Verified Purchase
The trial of Bo Xilai just wrapped up in Jinan a few weeks ago, and now the world is waiting to hear the fate of China's former political superstar. I've lived in China for several years, but was only casually following events pertaining to Bo, his wife Gu Kailai, and his top lieutenant Wang Lijun. I wanted to a book that could bring me up to speed and help me make sense of his trial - on this front, John Garnaut delivers the goods.

As an "instant history", this book provides an excellent introduction to the Machievellian politics which allowed Bo to attain to the heights of power, as well as the sordid events which precipitated his downfall. Obviously, Bo's saga continues to unfold but hopeful Mr Garnaut can expand on his work here once new information comes to light.

As a point of criticism though, this work could definitely use another round of copy editing... no one's perfect, but hopefully the book's glaring textual mistakes can be dealt with in future editions...
Read more

Duffman
4.0 out of 5 stars Punchy tale of one of China's biggest political scandals
2 January 2013 - Published on Amazon.com
Verified Purchase
I have enjoyed Garnaut's bold and insightful pieces for the Sydney Morning Herald over a number of years. He often highlights the capricious nature of the CPC when foreign business people step on the wrong toes. But it seems he has developed a particular specialty in the 'princelings', which of course is key to the Bo fiasco. Garnaut provides helpful background even in this brief book on new president Xi Jinping and other key power brokers. It is an informative and easy read both for those with only a casual interest in China's leadership struggles and for those who follow events more closely. If you are looking for a deeper view of the CPC then try 'The Party' by Richard McGregor. But as an e-book, this is very timely, picking up where 'The Party' left off (2010). I believe Garnaut is working on a full length book on the princelings. No doubt it will be proofread; it's a shame this e-book has so many easily fixed small errors.
Read more
4 people found this helpful

Walter Fane
4.0 out of 5 stars Game of Thrones
14 November 2012 - Published on Amazon.com
Verified Purchase
Interesting and readable. Garnaut does a great job of drawing a coherent line from the chaos of the Cultural Revolution to the modern phenomenon of Bo Xilai, exposing the shifting networks of alliances and reminding us of the unceasing brutality of Chinese political life. That said, it reads more like an extended magazine story or an early draft than a finished book. There are lots of grammatical and typographical errors. It needs a proper copy edit.
Read more
8 people found this helpful

Mgf68
5.0 out of 5 stars A masterful work - everyone interested in Chinese politics must read this
13 January 2013 - Published on Amazon.com
Verified Purchase
John Garnaut did some amazing, groundbreaking reporting for this book, including interviews with some of China's most media-shy princelings. It is beautifully put together with his easy-to-read prose. His ability to draw on Chinese history to put the events of the past year in perspective is impressive. I liked how he convincingly laid out the factional struggles that form the backdrop to the Bo family saga. As someone who covers this issue very closely in Beijing, I learned quite a bit from this short e-book.
This is a must-read book for anyone interested in Chinese politics. No one does it better that John Garnaut.
Read more

Andrew michelmore
4.0 out of 5 stars Fascinating
24 February 2013 - Published on Amazon.com
Verified Purchase
While slow and convoluted to start, the explanation of the actions, connections and political intrigue that surrounds Bo Xilai and his supporters is actually quite disturbing. This has not been described in the media and I believe that the end result is better for China's progress and the rest of the world.
The story takes off to a rapid pace after the first quarter of the book.
Highly recommend to China watchers Nd the general public.
Read more
2 people found this helpful
Go to Amazon.com to see all 22 reviews 4.0 out of 5 stars
Get FREE delivery with Amazon Prime
Prime members enjoy FREE Delivery and exclusive access to movies, TV shows, music, Kindle e-books, Twitch Prime, and more.
> Get Started
Back to top
Get to Know Us
Make Money with Us
Let Us Help You
And don't forget:
© 1996-2020, Amazon.com, Inc. or its affiliates