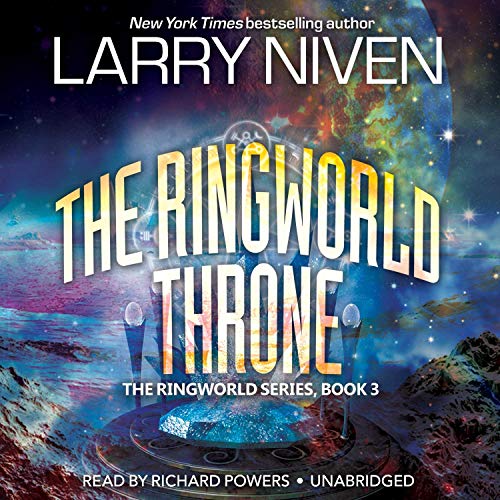 4.2 out of 5 stars
4.2 out of 5
116 global ratings
How are ratings calculated?
To calculate the overall star rating and percentage breakdown by star, we don’t use a simple average. Instead, our system considers things like how recent a review is and if the reviewer bought the item on Amazon. It also analyses reviews to verify trustworthiness.

F. M. Havicon
4.0 out of 5 stars isn't technology wonderful
Reviewed in the United Kingdom on 20 October 2016
Verified Purchase
if you recall, in Ringworld, they had tapes and spools for information storage. In Ringworld Engineers, they had giant micro-fiches that had to be cut into pieces to pass through the transporters. And now....well, obviously Niven didn't foresee the digital revolution (puts him on par with every other 60s/70s/80s sci-fi writer). It is often said that sci-fi reflects the age in which it was written, and not the future, and that is true of the Ringworld saga to date, as technology changes in the world around us. Suddenly the Hindmost has spray-on electronics...well. I won't spoil the rest of the dubious surprises for you! When a saga is written over decades, as here, you can expect certain conventions to change with real-world progress.

Story is split between the traditional "Louis Wu" viewpoint, and also told third-person from Ringworld natives' viewpoints, which is a new development. Means a slimline idea can be padded out somewhat...ahem. But of course this is Larry Niven who writes like a charm (that changes over time too) so you have all his delightful prose to enjoy while picking holes in the future of yesteryear. Personally I don't think this is one of his best novels, the first half of the book really does seem like padding, and things only really get going in the second half. But hey, this is Larry Niven we're talking about, presumably worshipped as a god-figure by a lost tribe in the Amazon, so we'll allow a little leeway for individual choice! Make a space for this on your bookshelf now...or wait and wait and wait for the kindle edition to appear.
Read more
One person found this helpful
Report abuse

AM
1.0 out of 5 stars Utter nonsense - avoid
Reviewed in the United Kingdom on 12 February 2014
Verified Purchase
The previous book (Ringworld Engineers) demonstrated exactly how a competent sequel should be done. It was not only a great book by itself but it also bolstered the original and made you optimistic and hopeful for the future of this fantastic setting. What does Niven have in store for us with this book?

By 50 pages in, the same point where Ringworld and Engineers had well gripped me, I was on the verge on tossing the book and having just finished it that would have been a wise decision. You begin to wonder exactly what has happened to Niven to be able to write in such a manner as to make Ringworld a boring place. Actually, that's half the problem of the book - Ringworld itself barely gets a mention, my heart would leap whenever 'the arch' or a spillpipe or a shadow square was mentioned, because I assumed that meant the story would finally get going. No such luck.

The entire first half of the book seems to be an exercise in introducing as many flat, lifeless characters as possible and making them all have 'rishanthra' with each other, believe me you will come to dread the sight of that word. Somewhere in there is a potentially interesting plot involving a vampire nest and various species of different tech levels having to ally themselves to fight it, but it's lost beneath awful writing and dull, tedious progression.

There's one standout scene involving the taking over of an old floating factory to conquer the vampires, and honestly, it's great. It takes you right back to the wonder and adventure of the first books. Here's the Ringworld we know and love.

Having had your little share of excitement, let's introduce the second half of the book, which is theoretically more interesting as it at least involves Louis Wu. For a while it seems there is a decent conclusion coming. Once again, don't get your hopes up, as the writing and plot becomes confusing to the point of complete bewilderment. I don't know who most of the characters are, what they're doing here, or any number of other pertinent questions.

It's not just that this is a bad and barely readable book, it's that it seems determined to ignore every last thing which made the previous 2 so great. Having seen many bad reviews as I bought it I had foolishly thought that the setting of Ringworld would make up for any amount of other flaws. As I said, that's bunk, as almost all of this book could be set anywhere and it wouldn't make the slightest bit of difference.

P. Jakes
1.0 out of 5 stars Oh dear......
Reviewed in the United Kingdom on 7 November 2011
Verified Purchase
Being an avid Larry Niven fan who count's the two preceding Ringworld books ('Ringworld' and 'Ringworld Engineers')as 2 of my favourire SF books.I was looking forward to reading 'Ringworld Throne' but what a disaster....
two virtually seperate plots that may as well have been two seperate books.......
the first half devoted to a conflict between Ringworld inhabitants was not exactly page turning stuff...the second half although marginally better had me skipping pages and speed reading to get to the end of the book which turned out to be confusing and just plain dull............ Read this instead  Protector
Read more
One person found this helpful
Report abuse

prushjobs
3.0 out of 5 stars Three Stars
Reviewed in the United Kingdom on 13 July 2018
Verified Purchase
Not as good as the rest of the series, but quite good.
Read more
One person found this helpful
Report abuse

Steve Charlton
5.0 out of 5 stars Very good indeed.
Reviewed in the United Kingdom on 28 January 2020
Verified Purchase
Such a good story. I so enjoyed reading it that as soon as I finished it I sat down read it again.
Read more
Report abuse
See all reviews
Back to top
Get to Know Us
Make Money with Us
Let Us Help You
And don't forget:
© 1996-2021, Amazon.com, Inc. or its affiliates