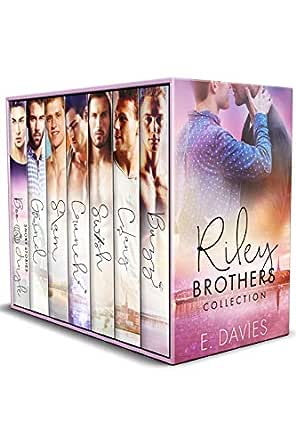 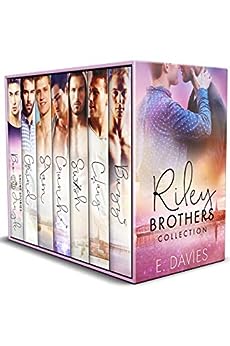 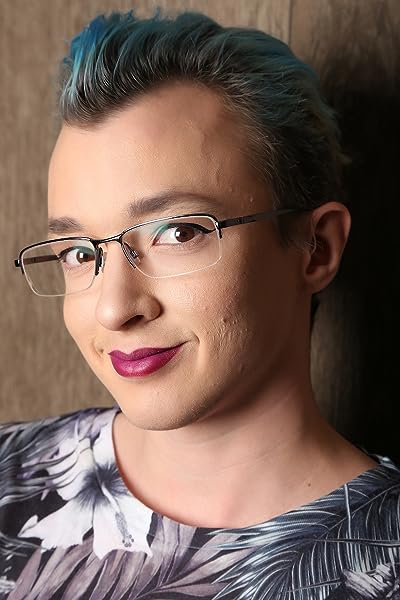 For the first time, enjoy the whole Riley Brothers series in one collection. If you’ve never met the Riley Brothers, dive in—the series has 300+ five-star reviews on Amazon, and the last book was a Rainbow Awards finalist!

Here are the six novels included in this 1500+ page collection, plus two NEW short stories (Boo and Jingle) that catch up with the guys four years later:

He’s nothing like me—and I’m falling head over heels.

Former hockey player Cameron Riley is back in his hometown and working as a beekeeper. He’s not supposed to get excited… which is impossible around his new boss’s art curator nephew, Noah. But the last thing Cam wants is to scare him off with his semi-famous status—or the heart condition that ended that career and his last relationship. When the past catches up with him, can he make the right choice? And will Noah forgive him for it, and trust in their future together?


When blacksmith Jackson Riley asks his friend Chase for help with his dating profile, his friendship stirs into more. Jackson wants a family tattoo, which Chase's skilled hands can deliver. But when Chase asks him to forge a sword, Jackson worries: what could he need protection from?

I wouldn’t be caught dead kissing you.

Bank teller Thomas Riley has depths he’s never shared… including the fact that his hunky ex, Alex, wants to see him again. Just three little problems: they broke up on bad terms, Thomas isn’t out to his family, and Alex nearly screwed up Cam and Jackson's lives very recently. Can reigniting an old flame ever work?

I listened to you, years too late.

Tattoo artist Floyd Turner's faith in justice was destroyed as a rookie cop. After a rough few years, he now runs a tattoo shop downtown. His high school reunion is coming up, and he's dateless, aching for something more. His family is chasing him for a debt long since paid. And then his former patrol partner walks in.

I don’t want to be the poster boy.

Hockey player Kevin Shaw, fresh out of university with a year to prove himself, doesn’t need any distractions—like coming out. But he can't say no when he's asked to train with a gorgeous friend of a friend. Life would be simpler if he could just train hard, get his big break, and squash the inconvenient torch he's carrying for Matty.

Strictly-business is hard around you.

James is in trouble. His family turned their back on him after he transitioned, and he’s paying the price of starting his new life alone. Buried in debt, he starts a business with hunky carpenter Ryan and hopes that they succeed. The one thing he can't afford is a distraction. But what if Ryan is the only one to see past it all and love him inside and out?

Catch up on Cam and Noah’s life as they celebrate their first Halloween with their twin toddlers, Charlotte and Harper. When Noah calls dibs on the queen bee costume and Cam says he’ll be his honey, what exactly does he mean? (“Boo” is currently available only in this collection.)

The whole crowd is here for Christmas lunch, but who will ‘fess up to hiring a Santa stripper to crash the party? (“Jingle” is exclusive to this collection and has never been made available anywhere before.)

Each book can be read or listened to on its own and promises a happily-ever-after ending, but you’ll enjoy them more as part of the whole series. A low-angst series filled with found family, banter, and small-town smiles. One-click now and enjoy!

StarDragon
5.0 out of 5 stars The Riley Brothers
20 November 2019 - Published on Amazon.com
Verified Purchase
One of the best feel good series I have ever read and reread often. Originally purchased the book’s individually but purchased the series and gifted it to my friends. I really wanted to spread the joy of a true family
Read more

Eloquentfool
5.0 out of 5 stars All together now!
6 January 2020 - Published on Amazon.com
Verified Purchase
A fabulous collection of stories. The brothers and their boyfriends, and their family of friends, together in one heartwarming collection that you won't want to put down!
Read more

Lovinghotbooks1
5.0 out of 5 stars Sweet family and friends stories
6 January 2020 - Published on Amazon.com
BUZZ
This was sweet and enjoyable, I love the siblings connection and I think this is a good start to a series that I think will move me very much.
No unnecessary descriptions of surroundings
Lots of good dialogues
The characters is developed in to realistic personalities that has me sympathetic to their challenges
Good storyline that progresses nicely to a happy ending

CLANG
I love this story and all the feelings in it. The author has created a world with some great characters and connections to each other.
The second brother falls in love, Jackson and Chase’s story is also a little raw and emotional
No unnecessary descriptions of surroundings
Good dialogues
Steamy love scenes and a sizzling connection between the two men
This series is in my opinion worth reading/listening to more then one time.

SWISH
Thomas is finally finding his happy ending and with someone I didn’t expect.
Alex and Thomas is rekindling their friendship and more.....

I still love the family connection and the author has managed to build a nice little world.

CRUNCH
Floyd and Chase’s story was good but my heart bleed for how Floyd is treated by his own parents.
No unnecessary descriptions of surroundings
Good dialogues
Sweet love developing between the two characters and the connection is clear from the beginning.
The storyline is good and progresses nicely to a happy ending.

Meeting the characters from the previous books in this series was sweet.

SLAM
Another good story about love and family
No unnecessary descriptions of surroundings
Good storyline that progresses nicely to a happy ending
Familiar characters that are developed in to realistic personalities
Sweet love story.

GRIND
I liked this story very much and I felt like James was so judged and not accepted by some people I wanted to cry for him. Ryan accept him as he is and l love his quiet approach to what his wondering about.
No unnecessary descriptions of surroundings
Lots of good dialogues
Well described characters that’s developed in to realistic personalities
The storyline is good and progresses to a natural ending.

BOO AND JINGLE
Both this novellas is short and very sweet. You get a look at how the Riley brothers and their friends has made changes in their life’s that’s made it even better for them.
They still take care of each other and have made a great little world where their safe.

Narrator:
This narrator is very good an easy to listen to but at times he can get a little too loud.
Clear pronunciation and read with feelings.

Erryn Barratt
5.0 out of 5 stars All in one with bonuses (an audio review)
20 December 2019 - Published on Amazon.com
I adore E. Davies’ books. He writes genuine and sweet romances that are sexy at the same time. There is a wonderful simplicity to the books that I love. I know what I’m going to get – low-angst, lots of love, tons of friends and family, and a happy ending. I need my happy endings these days.

Each book in this collection builds on the previous to create both character arcs and a series arc. It’s great that the audio finishes with two short stories that take place in the future. If there’s one thing I love, it’s getting to see characters living their happily ever after.

I do need to warn you – E. Davies books always begin with a bang. Usually mid sex scene. This can be jarring because you come off a nice sweet ending for the previous book. The narrator gives the title of the new book, and BAM you’re in the middle of hot’n’sweaty stuff. The first time it happened, I wondered if there was something wrong with the audio. There wasn’t. I think if you’re aware of the style, you’ll be fine. Heck, it might jack up your heartrate if you’re someone who really gets into the stories.

The series is narrated by Michael Dean (formerly Michael Pauley) and I love his work. Putting together such an extensive collection in one spot highlights both Mr. Davies’ talent as a writer and Mr. Dean’s ability to deliver such great performances. I highly recommend this series.

JKS
5.0 out of 5 stars Sweet and Beautiful
20 December 2019 - Published on Amazon.com
Wonderful! I love this collection. This collection is about the three Riley brothers and some of their friends. I love how the brothers bought their homes and live right next to each other and made one big backyard. It makes such a wonderful place for get togethers. Each story is true to life and tugs at the human spirit. You can't help but fall in love with these characters. I really enjoyed the two novellas at the end. They were a treat. This is definitely a collection of stories that can be enjoyed again and again and I highly recommend it.
Read more
Go to Amazon.com to see all 10 reviews 4.5 out of 5 stars
Get FREE delivery with Amazon Prime
Prime members enjoy FREE Delivery and exclusive access to movies, TV shows, music, Kindle e-books, Twitch Prime, and more.
> Get Started
Back to top
Get to Know Us
Make Money with Us
Let Us Help You
And don't forget:
© 1996-2020, Amazon.com, Inc. or its affiliates