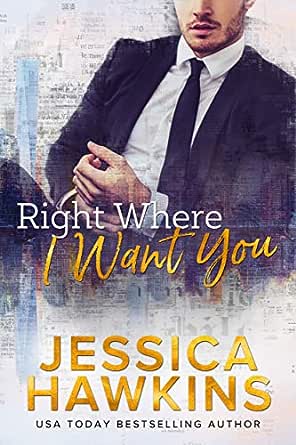 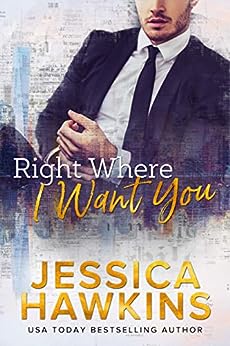 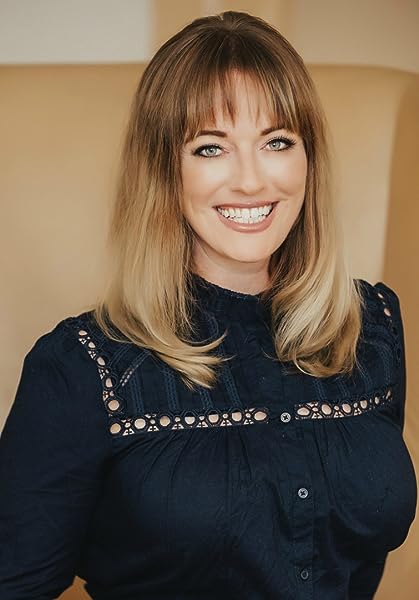 Right Where I Want You: An Enemies-to-Lovers Office Romance Standalone Kindle Edition

"An intelligently written, sexy, feel-good romance that packs an emotional punch and stays with you long after you finish reading it."--USA Today

"Jessica Hawkins gives us an enemies to lovers story of two people who really do complete each other. It's funny, witty, a pleasure to read! I enjoyed every page turning word."--New York Times Bestselling Author Carly Phillips

"All the book feels you want from a romance. Jessica Hawkins has outdone herself!"--Wall Street Journal and USA Today Bestselling Author Willow Winters

"Right Where I Want You was an absolute joy to read. Sebastian and Georgina were complex and endearing and the dynamic between them was explosive. Watching them navigate that fine line from enemies to lovers was insanely fun. A brilliant romance! Loved it!"--USA Today Bestselling Author Layla Hagen

Jessica Hawkins is a USA Today bestselling author known for her "emotionally gripping" and "off-the-charts hot" romance. Dubbed "queen of angst" by both peers and readers for her smart and provocative work, she's garnered a cult-like following of fans who love to be torn apart...and put back together. She writes romance both at home in the California desert and around the world, a coffee shop traveler who bounces from café to café with just a laptop, headphones, and coffee cup. She loves to keep in close touch with her readers, mostly via Facebook, Instagram, and her mailing list. Learn more at www.jessicahawkins.net --This text refers to the hardcover edition.

Seline
3.0 out of 5 stars Not that memorable!!
Reviewed in Australia on 7 January 2021
Verified Purchase
3 stars
I don’t remember most parts of this book which tells me that this wasn’t a memorable read. However, I love the cover which convinced me to purchase this in paperback form.
Read more
Helpful
Report abuse

Kindle Customer
4.0 out of 5 stars I enjoyed this book
Reviewed in Australia on 15 April 2020
Verified Purchase
I enjoyed this story of Georgina Kellar and Sebastian Quinn. I enjoyed their journey to them finding thejr happy ever after.
Read more
Helpful
Report abuse

Monique Cashmere
TOP 500 REVIEWER
3.0 out of 5 stars Hoping For Me...... But......
Reviewed in Australia on 3 January 2019
I really struggled with this book, in so many ways. It is classified as a romantic comedy and a contemporary romance, and I will go with the latter. There may have been some funny lines, but it was definitely no rom-com. I have seen others consider it a slow burn romance, but for me unfortunately it was just slow. As this is my first read by this author, I’m not sure if it is her style or just this particular novel, but I wasn’t a fan of all the self asked questions either.

The story in it self was sweet, an office love with cute dogs. He was an editor of a Men’s magazine who was in a slump due to personal reasons. She was the person hired to solve the problems and get the mag back up in the ratings. I found some of it confusing with them both jumping back and forth with their actions and feelings. There is a thin line between love and hate, but also between weak and arrogant. They were both bordering on that line a few times in my opinion. I’m sad to say that this book just didn’t do it for me but if you’re a fan of this author, you may well enjoy it.
Read more
One person found this helpful
Helpful
Report abuse

IheartRoarke
TOP 500 REVIEWER
4.0 out of 5 stars A great rom-com
Reviewed in Australia on 28 December 2018
This was a great romantic comedy which had laugh out loud moments, incredible characters, and an excellent story line. Firstly, the protagonists. What I love about Georgina is how real she feels. She gets pimples like the rest of us, feels insecure about herself, and has awkward moments that would make anyone cringe. She's also funny and has great come backs. One of my favourites was this:
*"Call all you want, and see if I come," I said, walking away before he could respond.*
Bam! Take that!
Sebastian or Se-beast-ian as I think I will forever know him as is quite the playboy. He has a way with the ladies. He's charming and a sweet talker. Fairly certain he could melt hearts with just a look ;)

He can come across as a bit of an a** but perhaps there is more to him behind his bachelor facade. Sebastian can certainly spice up any situation as can be seen here with exhibit a:
*"Uncover, exploit, whip," Sebastian listed as he made notes. "Maybe this won't be so bad after all. It'll be nice to be on the receiving end for once."*
Throughout the story, I was wondering, is he the good guy pretending to be the bad guy or the bad guy pretending to be the good guy?

Both of these individuals have some baggage with them and I think this has kept the opposite sex at bay. At least, prevented them from having meaningful relationships. Now when we look at them together, Georgina and Sebastian are at loggerheads pretty much from day dot. Nay, even before they realised who the other person was, they already have a mutual dislike.

I love the supportive characters especially Justin. He can be a bit of a goofball but he really cares about his friends and has good intentions for them. My favourite line from Justin has to be this:
"I love the guy, but I love to f*** with him more."*
I would love to see more of him hint hint ;)

This romantic comedy definitely explores the misconceptions we can have of other people based on their appearance and initial behaviour. There is so much more hidden beneath the surface if one is willing to look. Sebastian and Georgina go from enemies to friends and then perhaps something more. But can they overcome their reservations or will hate win out? The story is about letting yourself be vulnerable around another person. Letting them in to see who you really are inside and having them accept the you, all of you. It's also about overcoming insecurities about your identity and realising that the real you is always waiting inside you. Ready to come forth. This was a fun rom-com with all the feels and laughs.
Read more
Helpful
Report abuse

Claypot2850
TOP 100 REVIEWER
5.0 out of 5 stars Just what I needed...
Reviewed in Australia on 29 December 2018
This story was just what I needed. An enemies to lovers romance with plenty of humour, emotions and a slow burn chemistry I enjoyed.

Sebastian and Georgina were witty, believable and their banter was spot on. Loved the dual POV and felt their connection grow through the story. I adored the two best friends and would love a book for Justin. He was a real highlight for me.

Carly
4.0 out of 5 stars Right where I want you
Reviewed in the United Kingdom on 7 January 2019
Verified Purchase
‘Right Where I Want You’ is the first book I have purchased by Jessica Hawkins. It is well written, full of drama and had me on a literary rollercoaster.

When Georgina accepts a job working for ‘Modern Man’ she knows she is in for a tough ride. After thoughts of her ex-boyfriend make her doubt herself, she is determined to become ‘George’ her alter ego and put all her new male associates in their places. However, little does she know that she will have a whole new challenge in Sebastian Quinn, her rival and person she is essentially there to replace.

Sebastian has dropped the ball, after grieving for his mother he has enabled the ratings of his magazine to flounder. Georgina’s arrival ignites a spark, a spark that very much reminds him of how good he is and needs to be at his job. There is something about her that he instantly dislikes and the pair enter into a sparring match.

There’s a fine line between love and hate, and both characters find this in their own beautifully emotional way. Georgina has to overcome the fact she is stronger than her ex partner assumed, whilst Sebastian has to face his fear and grief.

This book was long and full of interesting and funny plot twist. It was sincere and relatable and the characters were very true and endearing. It was a thoroughly enjoyable read.

I’d recommend this book to all romance lovers and anyone looking to try reading works of a new author.
Read more
3 people found this helpful
Report abuse

Magwan911
3.0 out of 5 stars Lovely romance
Reviewed in the United Kingdom on 27 May 2020
Verified Purchase
A captivating romance from start to finish. The characters were good and the storyline perfectly delivered. My favorite character was justin, he was hilarious and just the right tonic to drive the characters forward.

It's a slow burner but that's what you need in a romance. I could see this as a film and it doing well as it has the right balance of new and old views.
I like this authors writing and direction of storytelling.
Definitely worth a look.
Read more
Report abuse

Kindle Customer
3.0 out of 5 stars Ok
Reviewed in the United Kingdom on 4 June 2019
Verified Purchase
This book is an easy read. Although I felt the storyline was a little rushed and seems a bit confused in places, the characters were ok and there were some humorous moments.
Read more
One person found this helpful
Report abuse

dingleberry
4.0 out of 5 stars 4/5
Reviewed in the United Kingdom on 5 January 2019
Verified Purchase
I devoured this quite quickly. It felt like a fairly light-hearted love story, with no real high stakes but some difficult choices. The characters were interested, if not overly deep.

This was a good read if you're looking for a well written romance novel and a quick read.
Read more
Report abuse

Jen
5.0 out of 5 stars 5 stars
Reviewed in the United Kingdom on 30 March 2019
Verified Purchase
I really enjoyed this book. New to this author and will definitely be purchasing more books from this author.
Is worth a read. It's different. Fun. Drama. It's not your usual office romance. In a good way. I like that. It's well written.
Read more
Report abuse
See all reviews
Back to top
Get to Know Us
Make Money with Us
Let Us Help You
And don't forget:
© 1996-2021, Amazon.com, Inc. or its affiliates