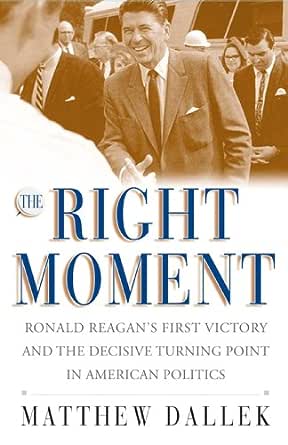 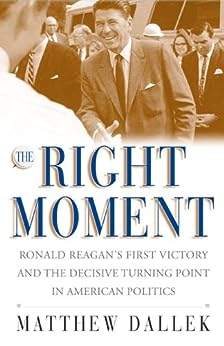 Dr. Kevin Starr State Librarian of California and author of The Americans and the California Dream series Exhaustively researched in primary sources, The Right Moment nevertheless moves at a breathtaking pace. Ours is a golden age of political biography and reportage, and with this stunning debut Matthew Dallek joins the front ranks of practitioners. In the 1966 gubernatorial contest between Ronald Reagan and Edmund G. (Pat) Brown, long-standing alliances collapsed and the politics of the nation itself veered in a new and post-New Deal direction. Here at once is the inside story and the national significance of what happened that summer and fall in volatile California.

Herbert S. Parmet author of Richard Nixon and His America A valuable and perhaps definitive account of a most crucial encounter. I admire its lucid and judicious approach, which gives it a voice that inspires confidence. This is essential reading on the 1960s and the rise of contemporary conservatism.

Alan Brinkley author of Liberalism and Its Discontents A rich, multidimensional picture not only of the 1966 California gubernatorial election but also of the contrasting political worlds out of which the two candidates came. The Right Moment helps explain how and why the confident, optimistic (and at times somewhat arrogant) liberalism of the 1950s and 1960s unraveled, and how newly powerful conservative forces moved in to pick up the pieces.

William E. Leuchtenburg William Rand Kenan Professor of History at the University of North Carolina, Chapel Hill, and author of In the Shadow of FDR: From Harry Truman to Bill Clinton In his very lively account, replete with many vivid characterizations, Matthew Dallek convincingly demonstrates that Ronald Reagan's election to the California governorship in 1966 was not only a milestone in the rise of the American right, but also a gravestone in the demise of American liberalism.

Irwin F. Gellman author of The Contender: Richard Nixon, The Congress Years, 1946-1952 Matthew Dallek dissects the complex drama of Ronald Reagan's rise in 1966, with its fascinating characters and explosive issues. Edmund "Pat" Brown comes to life as both a sympathetic liberal Democratic governor and a politician unable to cope with the dilemmas created by student upheavals, African-American frustrations, and Vietnam protests. Reagan gradually changes from an image on a movie screen to a voice for sanity and the voters' choice. The Right Moment is well balanced, well researched, and riveting. --This text refers to an alternate kindle_edition edition.


Matthew Dallek, a former speechwriter for Richard A. Gephardt, earned his Ph.D. in American History from Columbia University in 1999. His articles and reviews have appeared in The Washington Post, The Atlantic Monthly, The New Republic, and other national publications. He lives in Washington, D.C.
--This text refers to an alternate kindle_edition edition.

SPT
5.0 out of 5 stars The Past Made Present
Reviewed in the United Kingdom on 31 May 2018
Verified Purchase
As a Brit born after the events in question it was fascinating to read about Reagan’s early political career. The account really demonstrates how his victory in California was both a reaction to the times and a precursor to what followed. Also I was surprised at the level of political cynicism and commercialism that existed 50 years ago. It really helped me see that Trump and Brexit, far from being outliers, are consistent with longer term trends.
Read more
Report abuse

Nicholas Dujmovic
5.0 out of 5 stars Exceeded expectations--a great read
Reviewed in the United States on 29 July 2007
Verified Purchase
Not being a fan of the usual election campaign books, I took this up with low expectations. I just wanted to know something about Ronald Reagan's first campaign for governor. I also suspected that it would be something of a hatchet job on RR. To my pleasant surprise, Matthew Dallek has produced an engaging--even exciting--narrative that is very well balanced. Though he does tend to laud the "responsible liberalism" of Edmund "Pat" Brown, the Democratic incumbent that Reagan unseated, he also fairly portrays the new conservatism and "Creative Society" philosophy of Ronald Reagan and his supporters. I highly recommend this work as essential for understanding the beginnings of the Reagan Revolution. After this, a good read that bookends the subject is John Ehrman's 'The Eighties: America in the Age of Reagan.'
Read more
4 people found this helpful
Report abuse

Charger
3.0 out of 5 stars A Book By Its Cover
Reviewed in the United States on 5 November 2010
Verified Purchase
They say you can't tell a book by its cover. After reading The Right Moment: Ronald Reagan's First Victory and the Decisive Turning Point in American Politics, it's clear that you can't even tell a book by its title. Masquerading as a book about Ronald Reagan, this is really a book about the administration of California Governor Pat Brown and his losing campaign for reelection in 1966. I might be wrong about this, but it seems pretty clear to me that the author tried to peddle a book about Pat Brown and was told by his publisher to take the portions that had Ronald Reagan in them and to sell those as a separate book, since Reagan books sell and most people don't know who Pat Brown was. And, in order to actually sell copies of the book, they devised a title that made it seem like it was a book about Reagan's first political campaign. In fact, this book contains several long, very-detailed chapters about the administration of Gov. Brown and only a few biased and cursory chapters about Reagan. Additionally, Brown is portrayed extremely sympathetically and Reagan is portrayed almost always as a liberal's caricature of the man. Even being portrayed sympathetically, Brown comes across as a small-minded, squishy, second-guesser going through life with liberal blinders on who kept getting mugged by reality.
Read more
3 people found this helpful
Report abuse
See all reviews
Back to top
Get to Know Us
Make Money with Us
Let Us Help You
And don't forget:
© 1996-2021, Amazon.com, Inc. or its affiliates