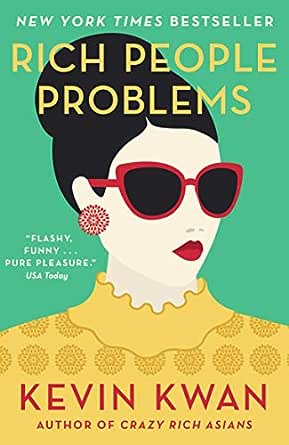 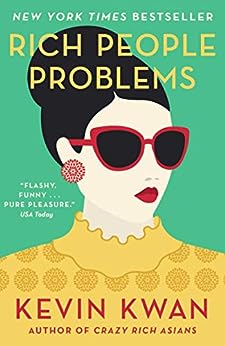 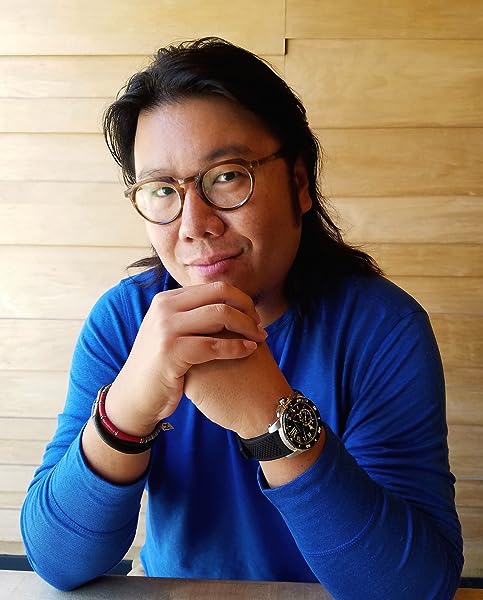 "Flashy, funny... Delicious, the juicy stuff of classic high-society drama... Rich People Problems is a fun tabloid romp full of over-the-top shenanigans, like a society party brawl that ruins both a Ramon Orlina glass sculpture of the hostess's breasts and 'a special pig that had only eaten truffles its entire life and was flown in from Spain...' A memorable, laugh-out-loud Asian glitz fest that's a pure pleasure to read." --Steph Cha, USA Today

"I gobbled all three volumes of Kevin Kwan's gossipy, name-droppy and wickedly funny Crazy Rich Asians trilogy as if they were popcorn. (Really fresh, still-warm popcorn, with that good European butter... but I digress.) The novels, set among three intergenerational and ultrarich Chinese families and peppered with hilarious explanatory footnotes, are set mostly in Singapore but flit easily from one glamorous world city to another... Irresistible." -Moira Macdonald, The Seattle Times "Kevin Kwan has done it again. The mastermind behind the delicious Crazy Rich Asians series has drawn a cult-like following with his extravagant tales of Asia's upper echelon. He's back at with the series's final installment, Rich People Problems (rest assured, it's just as enthralling as the trilogy's first two volumes)." -Isabel Jones, InStyle "[A] hilarious family drama... This delightfully wicked family saga will have you laughing over your summer daiquiris at the long-buried secrets of Asia's most privileged families and their rich people problems." --Redbook Magazine, "20 Summer Beach Reads to Stock Up On Now" "There are a lot of lines in Kevin Kwan's forthcoming novel Rich People Problems that will make you both roll your eyes and chuckle at the pure absurdity of the characters... Pure entertainment. Think: Bravo's 'Housewives' but with a lot more money and, as a result, a lot more drama." --Taylor Bryant, Nylon

"Thank god for Kwan... In Rich People Problems--Kwan's third installment in his Crazy Rich Asians series--even more insane family hijinks unfold when greed and jealousy get fortune-hungry schemers up in a wild tizzy. Catch up on the whole saga before the film's release." -W Magazine --This text refers to the hardcover edition.

Kevin Kwan is the author of the international bestsellers Crazy Rich Asians, soon to be a major motion picture, and China Rich Girlfriend. Born in Singapore, he has called New York's West Village home since 1995. For the latest news and information, please visit-

Author Hometown- Singapore --This text refers to the hardcover edition.

Kevin Kwan, bestselling author of Crazy Rich Asians and China Rich Girlfriend, is back with an uproarious new novel of a family riven by fortune, an ex-wife driven psychotic with jealousy, a battle royal fought through couture gown sabotage, and the heir to one of Asia's greatest fortunes locked out of his inheritance --This text refers to the hardcover edition.
Read more

4.6 out of 5 stars
4.6 out of 5
2,777 global ratings
How are ratings calculated?
To calculate the overall star rating and percentage breakdown by star, we don’t use a simple average. Instead, our system considers things like how recent a review is and if the reviewer bought the item on Amazon. It also analyses reviews to verify trustworthiness.

Mary May
4.0 out of 5 stars Asian bling rocks.
Reviewed in Australia on 28 May 2017
Verified Purchase
A lighthearted wind-up of the first two books on moneyed Asia. Greed,envy and the importance of one upmanship are delightfully laid out as an historic landpile and its fate create jewelled mayhem. Star crossed lovers like Astrid and Charlie return. Sensible Nick and Rachel,along with siblings galore, crisscross mountains of money bags to a satisfactory end.
Not quite as biting and blinged as Crazy Rich Asians, and plot thin. But continued fun peering into Asia's three comma world!

CONSCIOUSSHELF
TOP 1000 REVIEWER
5.0 out of 5 stars Hits you in the heart
Reviewed in Australia on 22 August 2019
Verified Purchase
I thought this was the most “real” book in the trilogy. I expected more extravagant adventures and spy-like missions BUT instead Kevin offers a really heart-warming deeply satisfying journey.

I thoroughly enjoyed the outrageous attempts of characters desperately trying to fit in and the mischievous ending.

June
5.0 out of 5 stars I loved every book in this series
Reviewed in Australia on 13 May 2018
Verified Purchase
I loved every book in this series. Those people are so nuts but being Asian myself, I can relate. I just laughed my way through the whole thing. Eddie Cheng is so OTT, what a nincompoop but I will never look at butt massages the same way again.
Read more
Helpful
Comment Report abuse

Msmart
5.0 out of 5 stars Amazing As Always
Reviewed in Australia on 31 May 2017
Verified Purchase
I always get so lost in Kevin's books. Captivating and alluring, I love being whisked away by his creative and hilariously intriguing writing style.
Thank you Kevin! Another winner. So sad that this book had to end

Katrina Young
5.0 out of 5 stars This is your summer holiday must-read
Reviewed in Australia on 21 July 2017
Verified Purchase
I absolutely DEVOURED Kevin's first two novels CRA and GRG so couldnt wait to crack into his third installment. It did not disappoint. Hilarious, sweet, zingy, ditzy and a gentle prod at the super rich Asians of Singapore, I enjoyed every last page. The perfect light hearted read for your next summer holiday beach break!
Read more
Helpful
Comment Report abuse

Jamie Hermes
5.0 out of 5 stars An excellent holiday read
Reviewed in Australia on 8 September 2017
Verified Purchase
Rich People Problems: A Novel
An excellent holiday read, lot's of fun. Almost as good as the first book Crazy Rich Asians and better than the second book, China Rich Girlfriend. I will look forward to reading the trilogy again on my next holiday.

Amazon Customer
5.0 out of 5 stars Great read
Reviewed in Australia on 20 August 2018
Verified Purchase
Third book as great as the first two. Thoroughly recommend. Takes a little longer to get into and to reconnect with the characters but well worth it.
Read more
Helpful
Comment Report abuse

st.nguyen
5.0 out of 5 stars What a surprise!
Reviewed in Australia on 7 February 2019
Verified Purchase
A bag of surprises around every corner. Just when you think you know the characters after 3 books, Kwan throws in a twist you never even saw coming! What a way to end the trilogy!
Read more
Helpful
Comment Report abuse
See all reviews

Amazon Customer
5.0 out of 5 stars The best so far
Reviewed in the United Kingdom on 9 December 2017
Verified Purchase
I had already read and enjoyed Crazy Rich Asians and China Rich Girlfriend so I thought I knew what to expect but this book is the best so far and exceeded all my expectations. The plot kept me hooked from start to finish and took twists and turns I had never expected. The exploration of family history rounded out the characters we had met briefly before. It was a delight to read and seems to me to be the grown up sibling of the first two novels.
Read more
8 people found this helpful
Report abuse

Michaela
5.0 out of 5 stars Great read
Reviewed in the United Kingdom on 30 January 2019
Verified Purchase
Absolutely loved this book, probably my favorite one from the trilogy. It still follows the story of Rachel and Nick but we get more insight into other Asian societies, find out about Nick's grandmother's youth, and best of all, we get satisfactory ending.
Read more
5 people found this helpful
Report abuse

Pomegranate
5.0 out of 5 stars Hilarious!
Reviewed in the United Kingdom on 8 July 2020
Verified Purchase
Book 3 is by far the most funniest of the trilogy - there are so many laugh out loud moments. The character Eddie Cheng is so funny and hilarious. I'm not usually a fan of book-to-film adaptations, but I'm genuinely interested in watching the final film adaptation. The author pokes fun at those living the high society life depicting how shallow and fickle some of them can be. The final book focuses less on the storyline of Rachel Chu and Nick Young, and instead focuses more on Astrid Leong and Charlie Wu's storyline which I personally find was more interesting. One thing that wasn't touched upon in the story, was what did Nick's mother Eleanor do years and years ago that made Nick's dying grandmother ask Nick's dad whether he has forgiven her - what did she do? The author doesn't tell us or was this already mentioned in book 1 or 2 which I have forgotten? I like how the author provides readers with a bit of history on Singapore - how it was once invaded by the Japanese. Anyway, it was a good read and I look forward to reading more works by this author.
Read more
Report abuse

Rani
3.0 out of 5 stars 99p on amazon.
Reviewed in the United Kingdom on 7 July 2020
Verified Purchase
The conclusion to the ‘Crazy Rich Asians’ trilogy sees the formidable matriarch Su Yi reach the end of her life after a heart attack, an attack that has the vultures circling Tyersall Park. A lot of drama and craziness in this.

One of my favourite parts of this book involved the scenes with Astrid - her ex remains a douche.

The scene with Rachel when she's getting lectures on having a kid - man oh man I winced and laughed. At least my relatives/elders are more subtle (although that may be because I'm not hitched).

All the way through this I was thinking this could make a seriously ace movie - the books have been ok, weirdly they have me hoping more movies come out - the drama onscreen could be ridiculously entertaining.

Richard G
5.0 out of 5 stars Just fabulous!
Reviewed in the United Kingdom on 6 September 2018
Verified Purchase
This the bird instalment of this series and I loved it just as much as the other books.

Having spent a lot of time in Asia you really are taken there and I can vividly imagine the locations described by the writer as well as some of the characters in the book!!