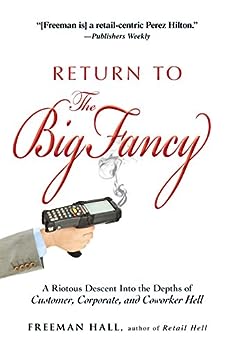 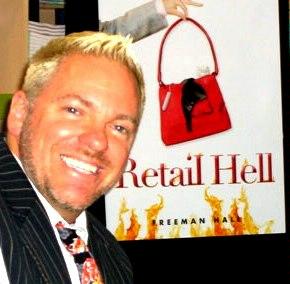 Return to the Big Fancy: A Riotous Descent Into the Depths of Customer, Corporate, and Coworker Hell Kindle Edition

Author of the acclaimed memoir Retail Hell, Freeman Hall spends his days running popular blogs and dogwalking his neighbor's adorable canines. He is also the author of Little Monster Hell, Discount Hell, and Return to the Big Fancy. --This text refers to the hardcover edition.

"Author Freeman Hill is profound in this book. His observations and his propensity for nickname-giving are both hilarious, [and] there are a few genuinely wonderful moments at the store. If you're getting malled this holiday season, you'll need a laugh, and Return to The Big Fancy packs a lot of extras." --The Bookworm Sez, LLC/Washington Blade

"Funny and relatable...Hall's stories of life in The Big Fancy will resonate with readers who have worked in retail." --Graffiti WV

"Anyone who has ever worked retail will simultaneously understand where Hall is coming from and laugh hysterically at the tales within Return to the Big Fancy. And if you haven't worked retail, hopefully it will help you put yourself in the shoes of those people ringing up your purchases the next time you go shopping." --The Randy Crazy Thoughts of Mandy blog --This text refers to the hardcover edition.

MsMelis
5.0 out of 5 stars A second hilarious trip to the Big Fancy
Reviewed in the United Kingdom on 18 January 2014
Verified Purchase
Freeman Hall's second book on the trials and tribulations at the Big Fancy is just as funny and sardonic as his first. I've quite honestly devoured both of them. I have also worked in retail and can vouch for the picture he provides of cut throat sales practices, back-room bitching and team members who are made into actual friends. Love it -- I'm happy for Freeman that he no longer works in retail but sad for his readers who miss his honest accounts of the sales floor.
Read more
One person found this helpful
Report abuse

Kindle Customer
5.0 out of 5 stars I have been a store manager once
Reviewed in Germany on 16 May 2020
Verified Purchase
Okey, it was not in the Big Fancy or selling handbags but what I can say is how very much I can related to what Mr.Freeman is writing about. After my experience (1 year, than I quite and found a way better paying job within 1 week) I am able to laugh while reading it. I want to tell you recommend this is everyone work in retail. I would also recommend everyone working in retail to get a better job.
Read more
Report abuse

Nitestar
4.0 out of 5 stars Love this book
Reviewed in Canada on 6 February 2014
Verified Purchase
I read this author's first book and then, somehow assumed that he would not be writing another one for some reason (don't really know why I thought this) which means I missed this when first released. But no matter, I got my hands on a copy and read it from beginning to end in just a few sittings.

Freeman Hall is genius when it comes to describing life in retail - as he is scaring you into submission, he is also making you laugh and in some cases, makes you feel ashamed for some behaviours you *might* have shown yourself.

Easy to read and an absolute joy. How about book 3?

Kelly P. Oconnor
4.0 out of 5 stars Required reading for anyone in retail OR for nasty shoppers
Reviewed in the United States on 20 July 2020
Verified Purchase
Having read "Retail Hell" years ago and LOVING it, I knew I wanted to read the sequel. Well, it's not as good, but it's still worthwhile, and it still held my attention cover to cover.
As a retail enthusiast, I can say that the terms, situations and systems described in the book are now out of date - but the basic concepts and customer behaviors are still there no matter what time period we're in.
Freeman Hall is hysterical, a great writer, and someone with whom I can relate. The names and locations are clearly altered as mentioned in the book - for example, there is, nor ever was, a Nordstrom in Burbank or Anaheim, so one can probably deduce that when those locations are mentioned, it may mean Glendale and Santa Ana. Only Freeman knows and unfortunately I don't think I'll ever meet him to hear the truth.
Customers are horrible creatures and I sincerely hope that the awful people described in these stories only represent a small fraction of the buying public, because if not, full price retail is doomed.
Highly recommend.

praetor1983
5.0 out of 5 stars Return To The Big Laughs
Reviewed in the United States on 13 October 2012
Verified Purchase
Freeman Hall, author of the hit Retail Hell, the mind behind the fantastic blog series Stuff That Makes a Gay Heart Weep ([...]), co-lead on Retail Hell Underground ([...]) and editor on the humor anthologies Little Monster Hell, Discount Hell, Stolen Hell and Coworker Hell returns to his roots with the long-awaited romp, RETURN TO THE BIG FANCY.

Freeman is a snarky wit reminiscent of David Sedaris and Jen Lancaster [the two best humor memoirists currently available], who brings depth and humor to the front lines of the war-torn battlefields of retail.

In his first memoir, we met such entertaining (and frightening) retail experiences as the Shopasaurus, some of our favorite Discount Rats, the NATs, and such hell-acious bosses that'd make your head spin all Linda Blair-like.

In Freeman's sophomore memoir outing, we delve back into the riotously awful world of The Big Fancy, an upscale store in LA, where Freeman and his Angels (the good coworkers) in the Handbag Department (NEVER purse) tackle surviving gawdd-awful children (little monsters), more discount rats with not-even-this-store coupons, some even dirtier NATs and more colorful (and scary) characters than you can shake a price-gun at.

You will not regret picking up and laughing with Freeman's foibles at the Big Fancy.
Read more
3 people found this helpful
Report abuse
See all reviews
Back to top
Get to Know Us
Make Money with Us
Let Us Help You
And don't forget:
© 1996-2021, Amazon.com, Inc. or its affiliates