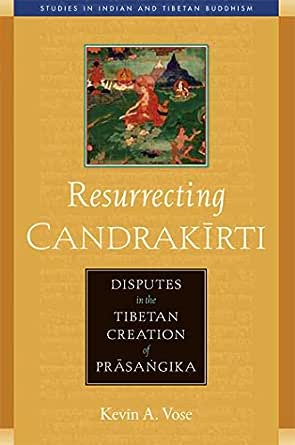 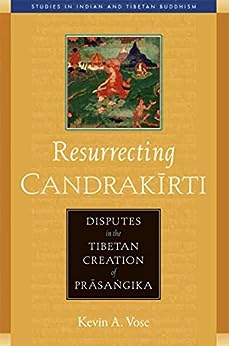 "A fascinating and brilliantly readable exposition of the re-emergence in India of Candrakrti's view of ultimate truth and of the controversies involved in its reception in Tibet before it became the dominant view."--Jeffrey Hopkins --This text refers to the paperback edition.

Kevin Vose is a professor of religious studies at the College of William and Mary in Williamsburg, Virginia. He received his PhD in Buddhist studies from the University of Virginia. His research examines the interplay of late-Indian and early-Tibetan Madhyamaka and the formation of Tibetan scholasticism. --This text refers to the paperback edition.

Gendun
5.0 out of 5 stars A Groundbreaking and Important Contribution
Reviewed in the United States on 10 July 2017
Verified Purchase
Kevin Vose's important study of the reception and early disputation over Candrakirti's philosophy in the 12th century, and subsequent formation of the putative distinction between the Svatantrika- and Prasangika-Madhyamaka schools, is a cornerstone of a series of new publications shedding light on the earliest phases of Prasangika-Madhyamaka in Tibet. Largely made possible of the discovery and publication of a 30-volume collection of early Kadampa writings, Vose joins Thomas Doctor, Helmut Tauscher, and others in rescuing figures of monumental importance such as Chapa Chokyi Sengyé and Mabja Jangchub Tsondru from deep obscurity in the western academic literature to their rightful place as towering, pioneering figures in the history of Buddhism.

This monograph is primarily concerned with following the textual evidence regarding the history of Candrakirti's reception, first in India, and then in Tibet, and then in substantially revising the nature of the earliest disputes between the Svatantrikas and Prasangikas. As is well-known, the crux of this distinction hinges around the method of inquiry that yogis are to use in establishing an understanding of emptiness, with the Svatantrikas demanding the use of autonomous syllogisms that commonly occur to both parties in a debate, and the Prasangikas adopting a reductio ad absurdum approach. After the time of Tsong Khapa in the fifteenth century, three conclusions were widely accepted in Tibet: 1) the difference between modes of argument between the two schools are of soteriological importance, as they imply different views on conventional and ultimate existence; 2) the use of autonomous syllogisms reflects the view that phenomena inherently exist, conventionally speaking, but lack inherent existence as the objects of reasoning analyzing their ultimate nature; and 3) the Prasangika view championed by Candrakirti and Buddhapalita is superior to the Svatantrika view advocated by Bhavaviveka, Kamalashila, and Shantirakshita.

According to Vose's account, this view, which is widely repeated by western scholars, distorts the historical complexity of how Candrakirti was initially received in Tibet, and in particular masks the degree to which the Prasangika position espoused by the Gelukpas and the Sakyapas especially owes a great debt to the self-professed Svatantrikas that they nominally reject. The picture that we inherit today is a story told by victors who have held the field for the last several centuries.

The first component of his approach is problematizing the received view with a revisionist account of Candrakirti that finds him a much more obscure figure in India and then in Tibet than he would eventually appear to be in hindsight. Based primarily on the negative evidence he finds in a lack of engagement with Candrakirti by other Indian authors, Vose argues that Candrakirti did not become particularly important until Atisha brought him to Tibet in the eleventh century. At a time when none of Candrakirti's works were translated into Tibetan, Atisha summarized and advocated his view as pre-eminent, laying the groundwork for an embrace of his views on ultimate truth that were canonical in some circles before his actual positions were widely known.

By the time we get to the twelfth century, the Svatantrika Chapa appears, rejecting what he took to be Candrakirti's radical antinomianism in favor of a more-popular and better-established position largely based on the logic and epistemology of Dignaga and Dharmakirti combined with his reading of Bhavaviveka. The core of the argument stemmed on whether and how consciousness could realize ultimate truth, and whether such a realization could be characterized as a valid cognition. In the view of Candrakirti commentators such as Jayananda, ultimate truth could not be realized by any consciousness, as any consciousness intrinsically entails dualistic appearances. Chapa's Svatantrika position rejected this view.

Anyone interested in Tsong Khapa will notice that Chapa's hybrid position synthesizing the approach of Dharmakirti with a Madhyamaka view closely resembles the solution that he would eventually land on. Vose argues that in many ways the eventual canonical picture of the Prasangika school that was to be widely accepted by the fifteenth century more closely resembles the Svatantrika school of the twelfth century as epitomized by Chapa than the view of earlier followers of Candrakirti such as Jayananda. In part, Vose suggests, this is because Jayananda accepts difficult conclusions from Candrakirti's texts and defends them at face value, rather than trying to accommodate them with a hermeneutic gloss-over, as later authors are wont to do.

This is an exciting time for the study of Indo-Tibetan Madhyamaka, and Vose's work is at the heart of the growing edge. The rediscovery of these important early texts casts light into a period that was, for the western scholarship, mostly a big blank, and there is some surprising and important stuff in there that tells us a great deal about the arguments that follow.

Vose's work is on the cutting edge, and perhaps consequently feels a bit patchy at times. For example, I felt that his argument that Candrakirti was not well known in India was pretty shaky given its reliance on negative evidence, when so much as unquestionably been lost from the first millennium. Given the tenuousness of this view, his own observation that for Candrakirti's Sanskrit work to have survived would have required a centuries-long tradition of copyists dedicated to preserving his manuscripts seems to me to be a powerful argument against his view here.

But what can one say - he's arguing at the edges in terra incognita, wading into intellectual territory that western authors know nothing about, and that Tibetan scholars are likely to question insofar as it deviates from the received tradition as it currently stands. I consider it a work of great importance - indeed, one of the most interesting and important studies of Indo-Tibetan Madhyamaka to have appeared in the last 25 years.

Atisha Dipankara
5.0 out of 5 stars Critical and Consise. A Must read for those who recognize Chandrakirti.
Reviewed in the United States on 15 June 2013
Verified Purchase
This is a great historical survey that cuts through the now outdated Secular and Sectarian views of when and how Chandrakirti influenced Tibet, and Prasangika specifically. More than just history, there are many examples within the book of how His words have been interpreted throughout the various Schools of Tibetan Mahayana.
There is a lot of info on Chapa who may have greatly influenced Tzong Ka Pa and later Gelukpa's'.
Overall quality is as expected from Wisdom though, the font is quite small. Maybe Wisdom is trying to save paper.
Not just for the academic or historic reader. There is much to learn in this work. May not be for the completely Esoteric minded though. Retail price is a bit high for those that are not
very interested in this subject.
Read more
6 people found this helpful
Report abuse

Chris in Colorado
4.0 out of 5 stars A history of Madhyamaka in Tibet and India.
Reviewed in the United States on 6 July 2015
Verified Purchase
A history of Madhyamaka in Tibet and its roots in India. Though it is not exhaustive or extensive as such, it will definitely fill you in on the major players in this period of historic transition and give you a more broad understanding of the forces in play during the period of the second spreading of Buddhism in Tibet. This is not for the casual reader of Buddhism but more for those with an academically minded approach to the subject.
Read more
2 people found this helpful
Report abuse

Larry Fallon
5.0 out of 5 stars read this to understand Prasangika
Reviewed in the United States on 27 October 2016
Verified Purchase
Excellent work of scholarship. Well researched and presented with clear heart and mind
Read more
Report abuse
See all reviews
Get FREE delivery with Amazon Prime
Prime members enjoy FREE Delivery and exclusive access to movies, TV shows, music, Kindle e-books, Twitch Prime, and more.
> Get Started
Back to top
Get to Know Us
Make Money with Us
Let Us Help You
And don't forget:
© 1996-2020, Amazon.com, Inc. or its affiliates