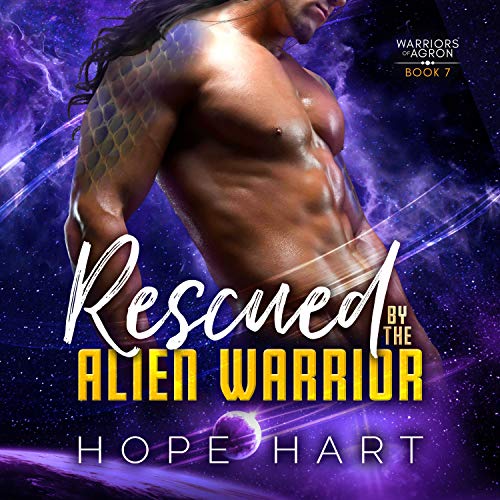 Rescued by the Alien Warrior: A Sci-Fi Alien Romance (Warriors of Agron, Book 7)

4.6 out of 5 stars
4.6 out of 5
347 global ratings
How are ratings calculated?
To calculate the overall star rating and percentage breakdown by star, we don’t use a simple average. Instead, our system considers things like how recent a review is and if the reviewer bought the item on Amazon. It also analyses reviews to verify trustworthiness.

FifiDevil
TOP 500 REVIEWER
5.0 out of 5 stars A fantastic story
Reviewed in Australia on 23 October 2020
I absolutely loved reading this book. I’ve not read any previous books in this series, but I’m hooked now. Zoey and Tagiz are attracted to each other, but Tagiz has been promised to another woman Mali. But Mali loves another amen, but Tagiz is only doing the mailing to please his father. There are lots of twists and turns in their story, so the only way to find out what happens, you will need to read this epic adventure for yourself. You won’t be disappointed.

Caroline Doig
TOP 50 REVIEWER
5.0 out of 5 stars Loved This Story.
Reviewed in Australia on 28 October 2020
I loved Tagiz’s and Zoey’s story I’ve missed a couple of these books but no worries even though they are part of a series they can be read as standalones with new characters in each of the books but you also get scenes with the characters from the other books. Tagiz has a mate already chosen for him by his father but they are like brother and sister they aren’t in love with each other, Tagiz has fallen for Zoey but he won’t go against the wishes of his father so will love conquer all with these two?. Fantastic story I loved it and I highly recommend this book.
I read a copy of this book through my kindle unlimited.
Read more
Helpful
Report abuse
See all reviews

Kaz31
5.0 out of 5 stars Heartwarming Read
Reviewed in the United Kingdom on 26 October 2020
Verified Purchase
Finally we get to hear Zoey's story and it is definitely worth the wait. I've loved all the stories in this series so far but I think this might just be my favourite. We first meet Zoey properly in Beth's story when she is finally rescued by Tegiz, Nevarda and a group of Braxian warriors searching for the missing women. When she is rescued she is in a bad way and taken back to camp to recover. This is her story; how she and Tagiz are perfect for each other but can't be together as he is promised to another in an 'arranged mating' to please his parents. I love that as always there is a HEA and that in order to have a future, you sometimes have to let go of the past; something both characters eventually learn. A great story, worthy of 5*+
Read more
One person found this helpful
Report abuse

Crissy P
5.0 out of 5 stars Love, simple?
Reviewed in the United Kingdom on 26 October 2020
Verified Purchase
This story reminds us that our past fears can influence our present and destroy our future if we let it. But it also reminds us that true love never dies and wins through in the end. You just have to give it a chance. Lovely story. 😍
Read more
Report abuse

Kindle Customer
5.0 out of 5 stars Good read
Reviewed in the United Kingdom on 10 November 2020
Verified Purchase
What a heart warming story, lots in's and out's to this tale will they won't they with a bit of action thrown in
Read more
Report abuse

Kindle Customer
5.0 out of 5 stars Rescued by the Alien warrior
Reviewed in Canada on 24 October 2020
Verified Purchase
Gotta love the Agron warriors in their stubborn ways and tunnel vision when they find their dated mates. Zoey and Tagiz are our couple who are fighting with romance.
Read more
Report abuse
See all reviews
Back to top
Get to Know Us
Make Money with Us
Let Us Help You
And don't forget:
© 1996-2021, Amazon.com, Inc. or its affiliates