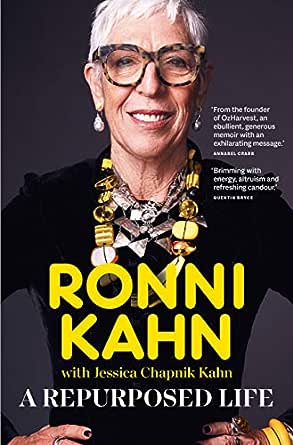 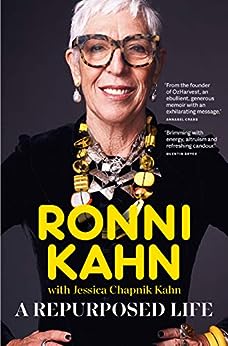 Ronni Kahn is a South-African-born Australian social entrepreneur and founder of the food rescue charity OzHarvest. She is an advocate, lobbyist and activist renowned for disrupting the food waste landscape in Australia. She appears regularly in national media, serves in an advisory capacity to government and is a keynote speaker all over the world. Her mission towards sustainable action is supported through close collaborations with some of the world's finest chefs, including Jamie Oliver, Massimo Bottura, Neil Perry and Bill Granger. Ronni is an Officer of the Order of Australia (AO) and was named Australian Local Hero of the Year in 2010. In 2018, her journey became the subject of a feature film, Food Fighter, directed by Dan Goldberg.

Jessica Chapnik Kahn is an Argentinian-Australian singer-songwriter, actor and writer. She has worked in theatre and TV, played in the bands of some of Australia's finest artists, and released two solo albums under the moniker Appleonia. She is the author of children's book Lenny and the Ants and poetry collection MADRE, which was inspired by the birth of her son, Lev. Jessica lives in Sydney and is married to musician Nadav Kahn. She is happy to call Ronni her mother-in-law. --This text refers to the paperback edition.

Stephen M. Mally
5.0 out of 5 stars Fantastic book about an amazing journey
Reviewed in Australia on 14 January 2021
Verified Purchase
This book tells the story of an amazing journey of a terrific person who has left her mark on people worldwide and, especially, Australia and our non-profit/for purpose sector. Many who have read this book have said they could not put it down! Loved the book, admire the person!
Read more
Helpful
Report abuse

Martina
5.0 out of 5 stars Great read!
Reviewed in Australia on 12 January 2021
Verified Purchase
A thoroughly enjoyable read of a life that has been wholeheartedly lived!!
Read more
Helpful
Report abuse

Elizabeth
5.0 out of 5 stars In one word - Amazing! A must read for everyone.
Reviewed in Australia on 31 March 2021
Verified Purchase
A fabulous and inspiring read. You won’t be disappointed. What an incredible lady and legacy!
Read more
Helpful
Report abuse

She went from living a very sheltered life in South Africa, to living on a Kibbutz in Israel and then immigrating to Australia. Along the way she had a couple of lovely sons, several significant relationships and some amazing businesses. She was well and truly an entrepreneur at a time when that wasn't really a thing, and an all-round amazing person, clearly.

I can't believe the work ethic and energy that this lady must have. She is so right; of COURSE food waste is terrible and any sane person would recognise that putting food in the bin just because it is surplus to requirements whilst others are going hungry is crazy! Unlike most of the rest of us, she decided to do something about it.

Fascinating reading how OzHarvest came to be and I love that Ronni doesn't shy away from admitting that she is more of a "fly by the seat of her pants" kind of person than someone with a careful plan and a suitcase full of money.

I also love that she has such a big heart and she encourages so many others to follow a path of kindness and sharing. I thoroughly enjoyed reading about her various mentors and others who are very important to her; Major Harmer, I take my hat off to you!

All in all, this is an inspiring read and I would highly recommend it to anyone.