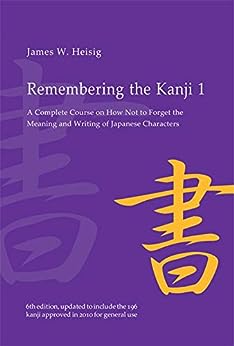 Remembering the Kanji: A Complete Course on How Not to Forget the Meaning and Writing of Japanese Characters Kindle Edition

James W. Heisig is a permanent research fellow at the Nanzan Institute for Religion and Culture in Nagoya, Japan. --This text refers to the paperback edition.

4.6 out of 5 stars
4.6 out of 5
1,315 global ratings
How are ratings calculated?
To calculate the overall star rating and percentage breakdown by star, we don’t use a simple average. Instead, our system considers things like how recent a review is and if the reviewer bought the item on Amazon. It also analyses reviews to verify trustworthiness.

Do not buy this book if you are after a useful book for improving your ability to read Kanji. This book only helps you remember Kanji.
A friend explained that if Remembering the Kanji 1 were about Poker, it would teach you how to memorise and draw each of the 52 cards without even telling you about the four suits or each cards rank, let alone how to make a Poker Hand.

RH
4.0 out of 5 stars Classic text does the job
Reviewed in Australia on 28 June 2021
Verified Purchase
All you need to add is daily effort over months or years
Read more
Helpful
Report abuse

DDD
TOP 1000 REVIEWER
4.0 out of 5 stars Good start
Reviewed in Australia on 7 October 2019
It helped, but didn't teach me kanji. Remembering kanji has always been my weak point. After getting through 3/4 of this book I understood the "meaning" of many kanji. But had no way to pronounce them as this is not taught in this book. It was a lot of effort, but looking back on it, it has made learning the readings a lot easier.

I would recommend it for a start, but move to learning pronunciation and jukugo ASAP.
Read more
Helpful
Report abuse
See all reviews

Michelle
5.0 out of 5 stars It works, if used and understood correctly.
Reviewed in the United Kingdom on 21 March 2018
Verified Purchase
Excellent if used correctly.

The good: If you follow the book page by page you will learn how to recognise all of the kanji.

The bad: You will not learn the readings BUT you will have sowed the seeds of recognition and you can then apply layers onto this as you learn further instead of just trying to over load from the start and learn everything in one go only to forget most of it soon afterwards.

The embarrassing: This book gets slated by people who have either never used it, never completed it, don't appreciate it for what it does do instead of what it does not do or worst of all, if they are an author of a rival book just looking to diss it in a you tube video because they don't like it.

The bottom line is this, many many people swear by this method, if you go into it looking to be able to recognise all of the kanji so as to later on be able to attach the readings to them as needed then you wont be disappointed. Walk before you run = win.
Read more
42 people found this helpful
Report abuse

Chris
1.0 out of 5 stars You could waste so much time trying to learn kanji this way
Reviewed in the United Kingdom on 21 June 2021
Verified Purchase
I gave this book a chance, I really did. I worked through several hundred kanji before I decided that any other method for learning kanji would be better. And having since switched to other methods, I have found that to be the case.

I have a few problems with this book. Firstly, the author states at the beginning that learning kanji is very difficult without using his method. He says - "What makes forgetting the kanji so natural is their lack of connection with normal patterns of visual memory. We are used to hills and roads, to the faces of people and the skylines of cities, to flowers, animals, and the phenomena of nature. And while only a fraction of what we see is readily recalled, we are confident that, given proper attention, anything we choose to remember, we can. That confidence is lacking in the world of the kanji."

This just isn't true. Kanji really aren't that difficult and once you're exposed to them enough, they do stick in your head without any need to break them down into small components and make up stories for them. It's true that some are harder to remember than others and there are similar kanji that can be confusing to distinguish from each other at first, but it just takes more practice in the language.

I would actually argue that this method is detrimental to learning kanji. Looking at the little parts that make up each kanji and then assigning keywords to them and THEN making up a story using those keywords, for 2000+ kanji is such a monumental waste of time. Even many of the people who successfully complete this book say it was a huge slog and not pleasant to do.

Another huge flaw of this book is how much emphasis it places on writing. This is so incredibly unnecessary in this day and age. I'm not saying learning to write kanji is necessarily bad but it's 100% not needed to be fluent in the language. Even a lot of Japanese natives don't know how to write all the kanji but here, huge importance is placed on it.

Another problem I have with this book is how much time it asks of you for so little in return. Advocates of this method say it only takes a couple of months and at the end of that you'll know all the necessary kanji. This really depends on how you define "knowing" them. At best, IF you stick with it and the method actually works for you, you'll be able to recognize kanji much better and have a general sense of what they mean in a sentence. You won't be able to actually read anything though since you're not taught any readings or compound words.

At best, this book is going to take you months to get through. You often hear that you can get through it in a couple of months but I don't believe that's accurate for most people. You would have to do 30+ new kanji every single day to do it at that rate and that's not taking reviewing kanji you've already learned into account. And this was another thing I found really off putting about this method - it eats so much of your study time. Learning Japanese is hard enough as it is without having to dedicate so much effort to something that doesn't even give you the ability to read Japanese at the end of it.

As other reviewers have stated, you would be so much better off spending that time learning actual Japanese. Real sentences that have compound kanji, readings, grammar etc. There are so many great resources out there now - apps, YouTube videos, online courses, audio books etc etc. You can pick kanji up naturally just by being exposed to them. They seem intimidating at first but it's so much better to expose yourself to them naturally in my opinion.
Read more
5 people found this helpful
Report abuse

L. W.
5.0 out of 5 stars Good place to start in learning Japanese
Reviewed in the United Kingdom on 30 October 2016
Verified Purchase
Absolutely brilliant method of learning the kanji. Of course you'll have to learn them in actual words, but this book gives you a solid framework to easily build from. Use in association with kanji.koohiidotcom where you can share mnemonics and use their SRS flashcards, as Heisig only provides mnemonics for the first part of the book. You can then adapt the techniques you learn here to create mnemonics for Japanese vocab, allowing you to pick up the language a lot faster. Took me about 5 months to complete. It's a bit dated and un-PC in places, but you can ignore any stories that are distasteful and create your own. It's worth reading alternative keywords on koohii as people have come up with better ones in places. I think it's worth getting a handle on the kanji before you start on the vocab as the kanji will not be an obstacle and you'll be building on what you already know.
Read more
14 people found this helpful
Report abuse

Charlotte Steggs
4.0 out of 5 stars I never thought I'd be able to write so many kanji!
Reviewed in the United Kingdom on 7 August 2014
Verified Purchase
I am a Japanese speaker - I studied at uni, went to live in Japan, worked at a major games company as a translator and now at another huge company where I use Japanese every day.
And yet I have always struggled with writing kanji. No matter what I did, I couldn't get them to stick in my brain when I wanted to write them by hand.

A large number of my Japanese-speaking friends were using this book and so I bought it to join the bandwagon. I'm probably only 1/10 into the book but I can't believe the amount of kanji I'm able to write just like that, following this method. I use a website in conjunction with it, which has the kanji in the same order as the book and also has some alternative stories just in case you aren't happy with Heisig's ones (as I often am) and I highly recommend you use the website as well.

A great book for beginners as you will learn what those "little picture things" mean, and great for people like me with a high level of Japanese, who can start to look at kanji in a much deeper way to try and remember how to write them.
Read more
19 people found this helpful
Report abuse

Matthew Kenworthy
5.0 out of 5 stars A quick and unique way to remember all the kanji
Reviewed in the United Kingdom on 13 November 2018
Verified Purchase
A great and unique way to learn the kanji. Don't expect to know how to pronounce all the kanji at the end, but that isn't what the book is designed to do. Instead you will go from seeing squiggles and funny symbols to being able to recognise each kanji using the primitives that make them up. I struggle with learning purely by repetition, but the method in this book can have you learning 10 plus kanji a day with minimal effort. Once you have this mental kanji dictionary, I find remembering the readings 10 times easier.

It seems as though all the negative reviewers are expecting to learn the language from this one book. You will not learn a single Japanese word from this book, nor will you improve your speaking skills even a tiny bit. This is a supplement to learning Japanese, and should be used alongside something like genki or minna no nihongo.
Read more
2 people found this helpful
Report abuse
See all reviews
Back to top
Get to Know Us
Make Money with Us
Let Us Help You
And don't forget:
© 1996-2021, Amazon.com, Inc. or its affiliates