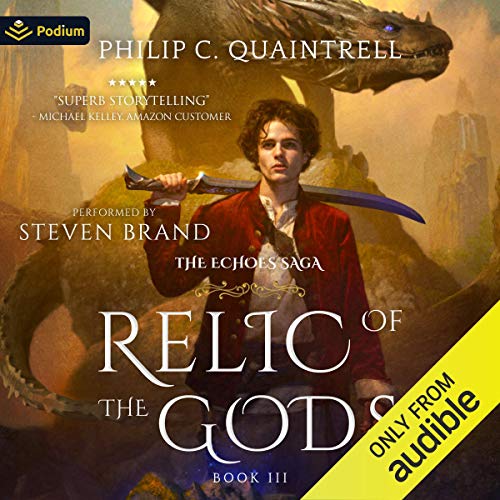 Relic of the Gods: The Echoes Saga, Book 3

The Echoes of Fate Have Been Heard. After a Thousand Years, the Prophecy Has Almost Come to Pass....

The final days of hope have come and gone. The kingdoms of Illian stand on the edge of ruin, threatened by the armies of Valanis. As evil spreads across the land, too few are left to hold the line.

A world away, the children of fire and flame may be the only hope for the realm, but the dragons have been defeated before. Now Verda's future hangs in the balance.

Reeling from their losses, Asher and his companions journey north, trying to outrun the savage Darkakin. A confrontation awaits the ranger but, even with Paldora's gem, he dare not challenge Valanis yet.

The days of the Dragorn have come again, and with them, a relic of the gods has been brought into the light. The knowledge of Verda's true history weighs on Gideon Thorn, and he would see the world rid of the evil that has cursed it from the shadows for so long.

A great change is coming, and a new Age dawns on the horizon. Whether it be the light or the dark that finds victory, one soul will suffer the burden of destiny for all....

Relic of the Gods Continues This Unmissable Epic Fantasy Series.

4.7 out of 5 stars
4.7 out of 5
819 global ratings
How are ratings calculated?
To calculate the overall star rating and percentage breakdown by star, we don’t use a simple average. Instead, our system considers things like how recent a review is and if the reviewer bought the item on Amazon. It also analyses reviews to verify trustworthiness.

Andrew
5.0 out of 5 stars A decent read
Reviewed in Australia on 13 September 2021
Verified Purchase
An intriguing storyline and some decent characters makes this series worthwhile reading. But the characters lacked the depth to genuinely care about them too much. Coupled with some fairly unnecessary formulaic inclusions of giants, trolls, centaurs etc made it overall like a decent time filler that you soon forget about
Read more
Helpful
Report abuse

Daniel
5.0 out of 5 stars loved it
Reviewed in Australia on 14 June 2018
Verified Purchase
i have been hanginh out for the third book to this series and ww it did not disappoint all of them have been a great read as well as your other series. i feel like oiver please sir can i have more? keep up the awesome work PCQ.
Read more
Helpful
Report abuse

Ryan
5.0 out of 5 stars A great mod-series ending
Reviewed in Australia on 3 November 2021
Verified Purchase
Satisfying ending that felt a long time coming. Really enjoying the foreshadowing of future events. Can't wait to see more of the characters in the future.
Read more
Helpful
Report abuse

Sonja McCarthy
5.0 out of 5 stars Gosh this book is brilliant
Reviewed in Australia on 21 May 2019
Verified Purchase
Oh my. This book is another step up from the first two. More character and world development. Fun and sad. I breathed this book in and loved every moment
Read more
Helpful
Report abuse

Kindle customer Nauru
5.0 out of 5 stars Irritated
Reviewed in Australia on 27 September 2018
Verified Purchase
Asher's death? Yes you're a bastard., Faylen survives but you had to still rob her of life didnt you? Gave it the full five stars because it was a good yarn.. Irritated me with Ashers death though.
Read more
One person found this helpful
Helpful
Report abuse

Michael
5.0 out of 5 stars Enthralling read
Reviewed in Australia on 13 July 2020
Verified Purchase
Loved the book from beginning to end, the best in the series so fa for me. Great plots and journey with the Ranger.
Read more
Helpful
Report abuse

Peter
4.0 out of 5 stars Good ending
Reviewed in Australia on 18 July 2019
Verified Purchase
I look forward to reading more of Philip's sagas.
Just make sure you don't pad them out to much. Enjoy
Read more
Helpful
Report abuse

Madup
5.0 out of 5 stars Stunning saga
Reviewed in Australia on 24 October 2020
Verified Purchase
This has kept me on the edge of my seat. Written beautifully and in a way it transports one right to the action.
Read more
Helpful
Report abuse
See all reviews

EloiseChristopher
5.0 out of 5 stars Fantastic Adventures
Reviewed in the United Kingdom on 12 February 2020
Verified Purchase
To be honest, though I love my fantasy, elves and dwarves are not normally my type of thing. However, I could not put any of these books down. It was only on the 5th book when I read the author's note that I realised that the saga wouldn't come to an end until book 9!! Although I was delighted to be able to read more about these characters, I was equally devastated to know that I'd have to wait quite a while before finding out what happens in the end. Fabulous characters and wonderful twists and turns that you don't seem coming. A few moments when I hated the author (how could you do that to him/her etc!). Book 4 introduces new characters and it's a testament to the skill of Philip C Quaintrell that he made readers care about new people (Ah Vighon!) and sucks us into events 30 years after the end of the 3rd book. New and old characters are well blended and the story well woven. The books are not perfect, but they make for a teriffic read. I ran through all 6 in under 2 weeks (love Stephen Brand on the audio books mind you).
Read more
Report abuse

Johnny7
1.0 out of 5 stars Blows it. A real disappointment.
Reviewed in the United Kingdom on 14 September 2019
Verified Purchase
There was much promise in the first two but in trying for the big finale Quaintrell lost sight of his characters. The conclusion to the trilogy is a series of massive battles with any character development completely forsaken. A real pity. If you saw the final season of Game of Thrones you'll know what I mean. There's nothing to grip the reader emotionally or intellectually. And the big individual face-offs have all the impact of a Jeremy Corbyn pronouncement. A real pity.
Read more
One person found this helpful
Report abuse

Philip Spick
5.0 out of 5 stars Brilliant Fantasy
Reviewed in the United Kingdom on 17 December 2018
Verified Purchase
Picked up this trilogy just as a try Philip Quaintrell out, not having read him before. Very gratefull I did. Completely different from other stories and really enjoyed the story, the magic, battles and characters. A world to match writers like Weiss and Hickman, Dragonlance as well as Brandon Sanderson, Mistworld. Highly recommended to readers who like excellent characters, involving and believable worlds. Have just bought his new Echoes of the Lost knowing it is going to be just as good.
Read more
Report abuse

Eliott James
5.0 out of 5 stars If you want a well thrashed out fantasy adventure story that doesn’t trip on it’s on feet Get This
Reviewed in the United Kingdom on 13 June 2018
Verified Purchase
Loved it.

For those considering this series please do urself the service and get it. It’s the perfect mesh of a high fantasy action packed saga but with a story that never luls or gets boring like some can. Everything is real and believable within the boundaries of the reality the author has built.

I devoured the whole thing within 3 days of its release and it only took me that long cause I had exams to study for and only let myself read on breaks.

It’s the most well rounded of the three and it did a great job of pulling all the story arch’s together.
Cant wait for the sequel series/trilogy. Also I’m sure you’ve thought of it but hey,
A prequel,
Set during the first war,
Following the last dragorn from that time / also partially from Garganathons POV would be amazing.
For me it felt like reading a book form of a really well developed and thought out triple A RPG tittle (don’t know if that makes and sense but I can’t think of a better compliment)
Read more
One person found this helpful
Report abuse

Steph Manchester
5.0 out of 5 stars Do not miss these books!
Reviewed in the United Kingdom on 17 June 2018
Verified Purchase
absolutely love this writers style, the depth of the storylines and the way they are woven together is breath-taking and as an avid reader who's been through all of the "big names" in this genre and has been picking at the less well known ones for something to read (and being disappointed) this series is absolutely the most refreshing and engaging one I've picked up in years! The characters are three dimensional, believable and imperfect and the story hurtles along at just the right pace to keep me up for hours after I should be in bed as I can't put them down! Superb!!!
Read more
One person found this helpful
Report abuse
See all reviews
Back to top
Get to Know Us
Make Money with Us
Let Us Help You
And don't forget:
© 1996-2021, Amazon.com, Inc. or its affiliates