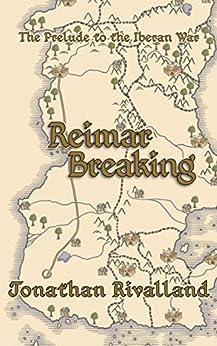 Reimar Breaking: The Prelude to the Iberan War Kindle Edition

A sharp dislike of anything to do with the outside has greatly complemented Jonathan Rivalland's intense desire to write novels and stories. Having finished his first book he is eagerly moving forward on to the other dozen or so titles that all deserve their turn (ability to complete them all in a standard lifetime notwithstanding). After incidentally being from South Africa, graduating university with majors in History and Psychology, moving to South Korea to teach ESL (and staying for four years), he moved to the US, where he primarily spends his time either writing or thinking about writing. Reimar Breaking is both the beginning of a series (The Iberan War) as well as the first of a variety of titles, set in the same universe (The Fourth World), concerning an array of characters, locations, and events. None of these have any reliable completion dates because the author is vigorously allergic to deadlines.

'Seregil of Rhiminee'
4.0 out of 5 stars A promising start to a new fantasy series!
Reviewed in the United Kingdom on 3 January 2017
Verified Purchase
Jonathan Rivalland's Reimar Breaking: The Prelude to the Iberan War is the first novel of The Iberan War series. It's a welcome addition to fantasy fiction, because it's an entertaining and well-told story with a promise of more greatness to come in the next installments. It was a positive reading experience and I can easily recommend it to other readers.

Reimar Breaking is Jonathan Rivalland's debut fantasy novel. Although it's a debut novel, it feels satisfyingly rich and robust. It has a bit of charming roughness around the edges, but the story is intriguing, well written and the author has put a lot of effort into it. The author's enthusiasm to tell stories shines through the text, because you get a feeling that he wants to write his own kind of fantasy and aims to entertain readers while doing so.

When I began to read this novel, I noticed that the author manages to lay a good foundation for further stories, because he introduces the world and various characters to his readers. The story moves swiftly forward, because there's a nice balance between characterisation, worldbuilding, politics and action scenes.

Here's a bit of information about the story:

- In the prologue, Commodore Paulo de Luca's ship, Reimar's Vigilance, is attacked by Archipelagan pirates. Soon Captain Siera and her skyship, Sky's Wrath, arrive and stop the pirate attack. Captain Siera and Commodore de Luca suspect that there may be an informant among them, because the attacks have been too well timed to be coincidences.

- During the voyage to Ilmarch, the capital of Reimar, Captain Siera du Tealdan has a meaningful conversation with Staff Sergeant Tomasso Rossi. She tells Tomasso that she has had to convince many people that an entire skyship regiment is a good idea and that the expenses are worth it. She asks him to bet on her being right.

- Siera reaches the capital and goes to see her father. King Abarron du Tealdan has a conversation with Duke Nicodemo who is suspicious about his missing contacts in Southmere and San Feras, because they haven't sent any messages to him. They talk about the possibility of a rebellion among the younger members of noble houses.

- Soon something bad and unexpected happens, because a shocking act of violence disrupts everything...

This is the beginning of an entertaining and well written fantasy story with a fascinating military flavour.

I found the characterisation to be fluent and entertaining, because the author managed to portray the characteristics and traits of his characters in a good and believable way. I enjoyed reading about their deeds and what happened to them.

Princess Siera du Tealdan is an interesting and well-created protagonist, because she's a young woman fighting against the odds. Because she's a Princess and a Captain, she has had to prove herself capable of keeping her promises and being a strong military leader. The author writes engagingly about her difficulties, because she has to put all of her determination and wits to use when things begin to get worse.

It was also interesting to read about Prince Ramiros du Tealdan, who is Siera's older brother. Ramiros has been enjoying his life at the court and has had a different kind of life than Siera. His life also changes when things get worse, because he has to take on new responsibilities.

Worldbuilding works well, because the author provides readers with detailed information about certain areas and leaves plenty of room for further worldbuilding. This kind of worldbuilding is to my liking, because you don't have to reveal everything in the first novel. It's good to reserve revelations for later, because it keeps things interesting for the readers.

It was interesting for me to read about the skyships, because Reimar is proud of them. Because of them, Reimar can drop onto its enemies' heads on land and at sea and defeat them. Skyships are superior to what the Ilnians have created, because they only have enchanted suits of armour that allow their wearers to fly.

The Helion is a fascinating ancient portal, because it's a gate between worlds. Nobody knows who built it, so its origins are intriguingly mysterious. The Helion brings wealth to Reimar, because it can be used to travel to other worlds. The cross-world trade is very important to Reimar.

Military issues are handled in a fluent and entertaining way. There's nothing heavy about them, which is nice, because they tend to be a bit tedious if handled in a wrong manner. The same applies to politics, because political matters are fascinating in this novel.

The author has spiced up his story with humour and action. The humorous elements lighten the story in a nice way and the action scenes keep readers entertained. In my opinion, the author succeeds well at both areas. He seems to be quite adept at adding a bit of humour into the dialogues without making it seem superficial.

I also want to mention that it was nice that the author delivered a few surprises. The brutal and unexpected act of violence surprised me, because I didn't expect it. The author wrote well about its aftermath, because it acted as a catalyst to the rest of the story and pushed things into motion.

It's great that this novel has a good and detailed map, because it's useful to readers. The map shows clearly where the various places are located and how much distance is between them. The appendix at the end of the novel is also useful, because it contains selected information about Reimar.

Although completely different, there was something in this novel that reminded me a bit of L. E. Modesitt, Jr.'s Recluce novels and Bradley P. Beaulieu's The Lays of Anuskaya trilogy, because the author wrote about military issues and skyships in a fantasy world. I was also slightly reminded of Christopher Nuttall's fantasy novels.

Reimar Breaking will hopefully be a start of a long series, because it's a promising start to The Iberan War series. The author has created a story that it is easy to expand, because he has left room for further revelations and character development. I look forward to reading the next novel. Readers who enjoy this novel will be pleased to know that a sequel is in the works and it will be called The Iberan War.

Because I liked the story and found it entertaining, I give this novel strong four stars on the scale from one to five stars. I look forward to reading the sequel, because I want to read more about the world and the characters.

Jonathan Rivalland's Reimar Breaking: The Prelude to the Iberan War will interest readers who are looking for new fantasy novels to read. It's an exciting, intriguing and well written novel. I can recommend it to readers who enjoy reading adult fantasy novels, because the author shows lots of promise for creating complex stories.

Mark k
5.0 out of 5 stars Graet new series
Reviewed in the United Kingdom on 3 October 2016
Verified Purchase
Loved it, great start to hopefully a long and exciting series
Already added to the list of authors i now have to read
Roll on the next book
Read more
Report abuse

Christian Rasch
5.0 out of 5 stars People you like might be people you can trust
Reviewed in the United States on 21 October 2016
Verified Purchase
Writing with minute detail for world building, believable character development and an overarching plot are strengths the author displays on nearly every page. Bringing to the reader characters one can care for, with their strengths and weaknesses that give them authenticity, Jonothan Rivalland manages to involve the reader as a test of their ability to judge a person's moral compass. People you like might be people you can trust. The peopel you dislike, you might dislike for a reason. Breaking with the general simplicity of contemporary writings of the genre, JR allows his audience to make up their own mind and see that either validated or challenged - and all that is wrapped with a well-crafted story, with charm, humour, action, emotions, set in a world that seems prepared to answer any question the reader could have.

In shorter words, the world makes sense, the characters are believeable, the story is diverse, and the writing conveying all of that seems a well-honed craft. While this may be JR's first commercial work, I am certain, he has worked on other things prior in a different environment. Very good editing and well-thought out scene establishment makes the book enjoyable throughout it's course.

The book may be his first, but here's to hope more is coming.
Read more
Report abuse
See all reviews
Back to top
Get to Know Us
Make Money with Us
Let Us Help You
And don't forget:
© 1996-2021, Amazon.com, Inc. or its affiliates