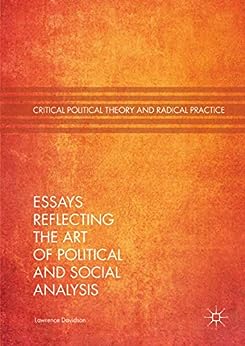 “Powerfully and succinctly argued, Lawrence Davidson's analyses compel one to think critically and humanely, raising questions that demand to be asked. An essential and much-needed resource that should be taught in every American classroom.” (Sara Roy, Senior Research Scholar and Associate, Center for Middle Eastern Studies, Harvard University, USA)

“In recent years no one has written more perceptively about the central features of global and national political culture than Lawrence Davidson. He manages to combine penetrating analysis with lucid prose to illuminate many complex issues currently challenging the future of humanity in fundamental respects.” (Richard Falk, Professor Emeritus, International Law, Princeton University, USA)

“If Thomas Paine were alive he’d be writing this. These short essays peer deeply into our political unconscious, using current and historical events and structures to force into consciousness an awareness of what choreographs our contemporary actions and perceptions.” (Glenn Bowman, Emeritus Professor, School of Politics and International Relations, University of Kent Canterbury, UK)

In 2011, Lawrence Davidson founded his website, tothepointanalyses.com, as a home for his brief essays on contemporary issues touching on US domestic and foreign policy. Over the last few years, Davidson's analytic reflections on contemporary politics have garnered over six million views. Now, for the first time, these essays are collected together to form a coherent, punchy look at American Politics in 2018. Contextualized by a new prologue and new conclusion, as well as updated with new material throughout, these essays provide a cogent demonstration of the power of analytical thinking to create clear and understandable descriptions of issues that impact us all, but are most often obfuscated by propaganda, lying by omission, or other forms of distortion. For those who encounter this work, it is hoped that they will come away with a clearer, if not happier, idea of what sort of world we are all living in.   --This text refers to the hardcover edition.

Lawrence Davidson is Professor Emeritus of History at West Chester University, USA. He is the author of five academic titles, most recently Islamic Fundamentalism (2013) and Cultural Genocide (2012).