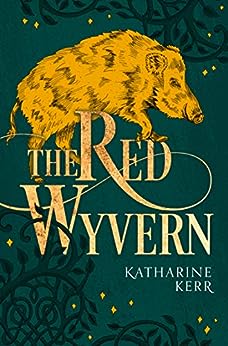 BOOK ONE OF THE DRAGON MAGE

Katharine Kerr’s Deverry novels have deservedly won her a large and devoted audience and great acclaim in the fantasy genre. Now, with 'The Red Wyvern', she opens a new chapter of the history of the kingdom of Deverry – an ideal starting point for newcomers to Katherine Kerr’s gorgeous epic, and a satisfying continuation of the saga for those readers who have followed the series through its previous incarnations.

In the North Country city of Cengarn, Rhodry of the silver daggers – half elven, half human – is beset by strange dreams. A dark haired enchantress, the Raven Woman, is haunting his sleep, and he can find no release, even in the arms of Dallandra, his lover.

Little does he know that his feud with the Raven Woman goes back over three hundred years, to a time when the very throne of Deverry stood under threat of civil war.

In those days, the young king’s cousin, Lilli, was unwillingly drawn into the web of intrigue and ambition that surrounded the scramble for power. Forced by her scheming mother, Merodda, to use her embryonic magical powers to scry for omens, she saw terrible visions: great red wyverns sweeping down from the mountains to plunge like hawks upon a herd of feeding swine…

Were these the fancies of an untrained mind ? Or omens foretelling bloodshed and disaster for the clan of the Boar ?

Katharine Kerr was born in Cleveland, Ohio, in 1944 to a family which considered itself British in exile far more than American. In 1962, she moved to the San Francisco Bay Area, and has lived there ever since. After leaving Stanford University, she worked in a number of low paying jobs while she read extensively in the fields of classical archaeology and literature, medieval and Dark Ages history, and modern fiction. Eventually she met up with an old friend from school, Howard Kerr, who loved cats, books and baseball as much as she did; they were married in 1973. In 1979 a friend gave Katharine her first fantasy role playing game. She became so intrigued with gaming and with the fantasy field that she began writing articles for gaming magazines, and for some time was a contributing editor to Dragon magazine, as well as devising gaming modules. Now, however, she is devoting herself exclusively to fiction, for the simple reason that there are only twenty four hours in a day.

“Kerr is a master of her trade … She has created a world that might very well go on for ever, and this one reader sincerely hopes it does”
VECTOR

“An unusually scholarly writer of fantasy”
THE TELEGRAPH

“Much as I dislike comparing anything to 'The Lord of the Rings', I have to admit that on this occasion its justified”
INTERZONE

rr's richly imagined cycle of novels set in Deverry and the Westlands has earned a devoted following--and a reputation as the finest Celtic fantasy being written today.  Now she returns to Deverry's war-ravaged past....<br><br>On a misty lakeshore, a lost huntsman encounters a magic-touched realm.  In a stark Northlands settlement, a peasant girl hears whispered omens, and sorceress bargains with astral beings.  All three are caught in a cauldron of fate and magic that has simmered for many lifetimes.<br><br>For long ago, in a Deverry torn by civil war, young Lillorigga seeks to shield her dawning powers from her cruel mother Merodda's manipulation.  Mistress of a magic that, untamed, could kill her, Lilli brings her terrifying visions under the kindlier tutelage of the mysterious dweomermaster, Nevyn.  But soon she must choose between her own clan and the true king who fights to claim his rightful throne, between sanctuary and blood feud, --This text refers to an alternate kindle_edition edition.

‘Kerr is a master of her trade… She has created a world that might very well go on for ever, and this one reader sincerely hopes it does’
VECTOR

‘One of the top fantasists of her generation’
INTERZONE

Leaving snowy Ohio for California, Katharine Kerr studied at Stanford University for a spell before dropping out to join some of the many social movements sweeping San Francisco in the 60s. She first became involved in the field of fantasy through role-playing games, writing articles for gaming magazines and authoring early quests for Dungeons and Dragons - all of which soon led her to fantasy writing, with her first Deverry novel, Daggerspell, appearing in 1986. Since then, her Deverry series has hit The Times and the Australian bestseller lists, garnering fans from around the world. --This text refers to the paperback edition.
Read more

4.8 out of 5 stars
4.8 out of 5
74 global ratings
How are ratings calculated?
To calculate the overall star rating and percentage breakdown by star, we don’t use a simple average. Instead, our system considers things like how recent a review is and if the reviewer bought the item on Amazon. It also analyses reviews to verify trustworthiness.

Rhian
5.0 out of 5 stars the red wyvern
Reviewed in Australia on 17 April 2014
Verified Purchase
I just love her stories they have fun sadness love and all the emotions you can feel come alive in her books
Read more
Helpful
Report abuse
See all reviews

Kilt_monster
4.0 out of 5 stars Nice book; much less brutal than the current 'in fashion' fantasies
Reviewed in the United Kingdom on 26 March 2017
Verified Purchase
As with Kerr's other novels this forms one part of a large skein of events interlinked through time by the people who die and are later reborn - their souls continue quarrels through the lives of many different people.

Versus Game of Thrones, Malazan and Wheel of Time this is a much happier and easier read; the world and locations are smaller, the plot less convoluted and everything follows a medium sized caste who each have their own importance in the grand scheme. It's the sort of thing you want to read when you just want to *enjoy* a book and not be taken through a mental and emotional wringer each chapter. Likewise you don't find yourself losing track of characters and locations if you put the book down for a few days. In no way does this imply Kerr's book is a lesser work - it's just written in a very different timbre.

Would definitely recommend Kerr for any fantasy fan who fancies trying something different.

Although in the grand scheme everything is linked this comes 'later' in the overall telling so if you want to understand and appreciate the key characters and events more I'd recommend reading some of her earlier novels.
Read more
Report abuse

N Beveridge
5.0 out of 5 stars All time favourite books
Reviewed in the United Kingdom on 21 September 2018
Verified Purchase
Katherine Kerr's Derry novels are some of my all time favourites. Once you are in, you will be hooked.
Read more
Report abuse

snail333
5.0 out of 5 stars Great
Reviewed in the United Kingdom on 15 September 2017
Verified Purchase
Another great book from the series
Read more
Report abuse

R SUTCLIFFE
5.0 out of 5 stars Great read
Reviewed in the United Kingdom on 26 May 2014
Verified Purchase
Bought this used. Received quickly and in good condition. Love the series, particularly the way the stories of the characters are built up by moving backwards and forwards through the volumes, concentrating on a specific period of there lives, and incarnations.
Read more
Report abuse

mrs d j woollard
4.0 out of 5 stars Best series
Reviewed in the United Kingdom on 26 March 2021
Verified Purchase
Not the same size as all the other books in the series. Looks out of place on the book shelf.... Still a very good book/series.
Read more
Report abuse
See all reviews
Back to top
Get to Know Us
Make Money with Us
Let Us Help You
And don't forget:
© 1996-2021, Amazon.com, Inc. or its affiliates