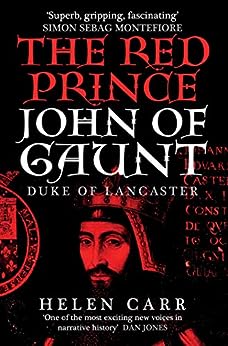 The Red Prince: The Life of John of Gaunt, the Duke of Lancaster Kindle Edition

by Helen Carr (Author) Format: Kindle Edition
See all formats and editions
Sorry, there was a problem loading this page. Try again.
A TIMES AND SUNDAY TIMES BEST BOOK OF 2021

‘The Red Prince announces Helen Carr as one of the most exciting new voices in narrative history.’ Dan Jones

Son of Edward III, brother to the Black Prince, father to Henry IV and the sire of all the Tudors. Always close to the English throne, John of Gaunt left a complex legacy. Too rich, too powerful, too haughty… did he have his eye on his nephew’s throne? Why was he such a focus of hate in the Peasants’ Revolt? In examining the life of a pivotal medieval figure, Helen Carr paints a revealing portrait of a man who held the levers of power on the English and European stage, passionately upheld chivalric values, pressed for the Bible to be translated into English, patronised the arts, ran huge risks to pursue the woman he loved… and, according to Shakespeare, gave the most beautiful of all speeches on England.
Read more
Previous page
Next page

'John of Gaunt is a name to conjure with - an English duke who sought to become a king in Spain, a complicated, controversial man to whom, as "time-honour'd Lancaster", Shakespeare gives one of his greatest speeches. Helen Carr puts him centre stage: The Red Prince is the rattling good story of a life lived on an epic scale, told with care, insight and humanity.'--Helen Castor, author of She-Wolves and Joan of Arc

'Helen Carr's spellbinding and richly researched debut biography... looks at one of the major medieval figures in Britain with a fresh and appealing perspective... Carr tells his story with conviction and fascinatingly rich detail.'--Boisdale Life

'[The] opening reference is... typical of the nuances of Carr's portrayal of an often-misunderstood figure... Carr presents an authoritative account, acknowledging all aspects of a complex character whose devotion to royal privilege was equally a convoluted illustration of his own interests.'--Emma J. Wells, TLS

'The Red Prince is not...just a book of battles and wars. Carr's John of Gaunt is a man who loved as passionately as he fought... Carr's sensitive use of contemporary sources paints a poignant deathbed scene... in The Red Prince it is the towering figure of John of Gaunt, a thoroughly European Englishman, who takes centre stage and it's a stirring and memorable performance.'--Leanda de Lisle, The Times

'A long overdue reappraisal of one of medieval England's greatest but most enigmatic figures. The Red Prince announces Helen Carr as one of the most exciting new voices in narrative history.'--Dan Jones, author of the Plantagenets and The Hollow Crown

'An absorbing biography of one of the great figures of the English past.'--New European

'Deploying vivid and compelling prose alongside her considerable scholarship, Helen Carr fully succeeds in restoring John of Gaunt to his rightful place - in the first rank of medieval princes. This is an excellent book, that brings the fourteenth century back to life through a thoughtful parade of intriguing characters - none more fascinating than John of Gaunt himself.'--Charles Spencer, bestselling author of Blenheim and Killers of the King

'Helen Carr has captured the drama of [John of Gaunt's] life and the tensions inherent in it in a compelling portrait. In so doing, she reminds us of the contradictions of a period remote from our own, not just in time but in values and beliefs too... Carr has brought to life one of the major figures of medieval England.'--Linda Porter, Literary Review

'Helen Carr is a really exciting new talent in the world of history writing, whose work strikes a perfect balance between lucidity and scholarship. Her debut, The Red Prince, is a beautifully nuanced portrait of an oft misunderstood man.'--Rebecca Rideal, author of 1666: Plague, War and Hellfire

'Helen Carr is one of the most exciting and talented young historians out there. She has a passion for medieval history which is infectious and is always energetic and engaging, whether on the printed page or the screen.'--Dan Snow

'Helen Carr tells the gripping story of John of Gaunt's dramatic and controversial career, from the wars he waged across Europe to the political intrigue and rebellion he faced at home, and above all the way in which his life was marked by profound love, and loss. This is an engaging and moving portrait of one of the leading figures of the Hundred Years War.'--Sophie Thérèse Ambler, author of The Song of Simon de Montfort

'His fame has faded in recent years but Helen Carr's absorbing new biography returns him to his rightful place.'--Daily Mail

'In Shakespeare's Richard II, John of Gaunt gives the "this scepter'd isle... this England" speech. This vivid history brings to life his princely ambitions and passion.'--The Times, Best Books of 2021

'Superb, gripping and fascinating, here is John of Gaunt and a cast of kings, killers and queens brought blazingly, sensitively and swashbucklingly to life. An outstanding debut.'--Simon Sebag Montefiore

'This biography explores the motivations of a complex figure who, for years, skilfully moved through a world of chivalry, legislative machinations and enormous wealth... This is a compelling profile of a pivotal figure in English history.'--History Revealed --This text refers to the paperback edition.

War, revolution and love - dazzling medieval history from a rising star --This text refers to the paperback edition.

Helen Carr is Professor of Law at Kent Law School. --This text refers to the paperback edition.
Read more

4.4 out of 5 stars
4.4 out of 5
148 global ratings
How are ratings calculated?
To calculate the overall star rating and percentage breakdown by star, we don’t use a simple average. Instead, our system considers things like how recent a review is and if the reviewer bought the item on Amazon. It also analyses reviews to verify trustworthiness.

Michael
5.0 out of 5 stars Outstanding biography of a fascinating medieval enigma
Reviewed in the United Kingdom on 27 April 2021
Verified Purchase
I read lots of historical biographies, especially from this period. This is a most remarkable book: with her delightful lucid writing Helen Carr transports you smoothly through a complex and turbulent period of history without missing any of the key facts, incidents or actors. Indeed, once you start you are then carried effortlessly forward and onwards on almost a magic carpet of prose. This combination of serious history and easy reading is an extraordinary achievement, equalled by few historians, let alone in a first book. Using the full array of sources Carr takes you to all manner of places and events not usually covered, most notably John of Gaunt's considerable political and diplomatic achievements, especially in Scotland, and his military campaign in Castille, before addressing Gaunt's fall from hero to villain at the time of the Peasants' Revolt. In sum this is an outstandingly good read that I recommend most strongly.
Read more
24 people found this helpful
Report abuse

susan ohare great book, can't wait to read the final book in tne trilogy
5.0 out of 5 stars Fascinating
Reviewed in the United Kingdom on 26 July 2021
Verified Purchase
I first came to learn about john of Gaunt after reading many years ago a book called Katherine, by Anya Seton, I became very interested in this period of history, john seems to me to have been an honourable lord for those times and this book is a really excellent read. The author has meticulously exlained his personal life and all the politics of the period. I would recommend this book to anyone who loves history as I do
Read more
9 people found this helpful
Report abuse

Ricardus
5.0 out of 5 stars An important new book
Reviewed in the United Kingdom on 25 May 2021
Verified Purchase
John of Gaunt 'The Red Prince' was an important figure of his times has been overlooked by historians who have concentrated on his older brother the charismatic 'Black Prince'. John of Gaunt's influence on history'
,as The Duke of Lancaster' was such that he could be considered to be the progenitor of 'The Wars of the Roses'. This is a well produced and well written book which desrves a place in any library covering this period of history.
Read more
5 people found this helpful
Report abuse

michael Billington
4.0 out of 5 stars Concise biography of time honored Lancaster
Reviewed in the United Kingdom on 1 July 2021
Verified Purchase
A concise and well written biography of the founder of the house of Lancaster and the progenitor of the Tudors. Sympathetic without being uncritical of Gaunt's failures of judgement and decisions. I enjoyed this book a lot, only real complaint is that it was not longer
Read more
4 people found this helpful
Report abuse

aquitaine my home
5.0 out of 5 stars The Red Prince: The Life of John of Gaunt, The Duke of Lancaster
Reviewed in the United Kingdom on 10 September 2021
Verified Purchase
I have always been a fan of John of Gaunt and felt that his place in history was severely misrepresented. This book has addressed, at last, that view and given a more positive view of his life and times. Well written with a full list of sources and bibliography.

Highly recommend for all those with an interest in the Plantagenets and particularly John of Gaunt and Edward III, etc.
Read more
One person found this helpful
Report abuse
See all reviews
Back to top
Get to Know Us
Make Money with Us
Let Us Help You
And don't forget:
© 1996-2021, Amazon.com, Inc. or its affiliates