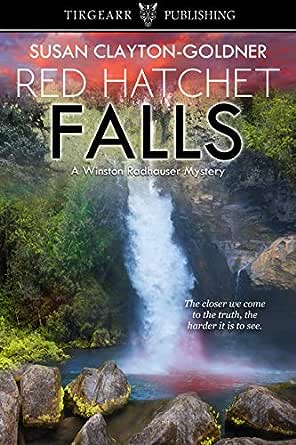 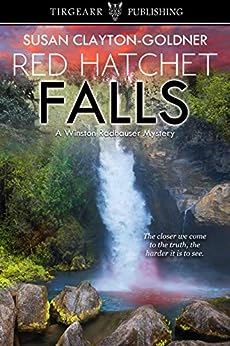 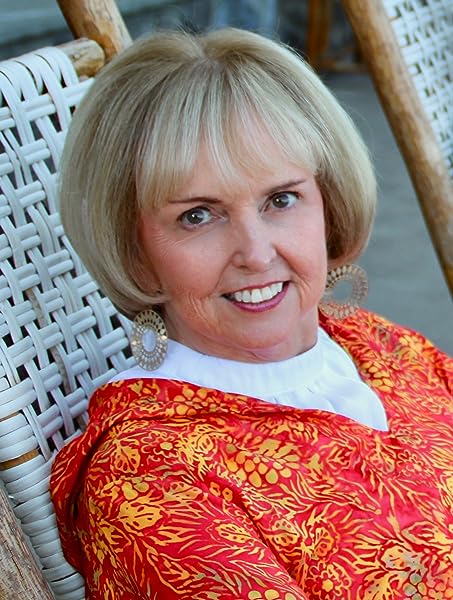 The idyllic town of Ashland is nestled in the foothills of Siskiyou Mountains. Locals often describe it as a little bit of England set down in Southern Oregon. Yet amidst the historic craftsman bungalows, the world-renown Shakespeare theaters, and the lush, manicured gardens in Lithia Park, something evil lurks.

While walking his pet raccoon, 72-year-old Homer Sullivan spots something shiny sparkling in the leaves near Ashland Creek. Thinking it might be something valuable, he hurries over to retrieve it, hoping he’ll become someone’s hero. He panics when he discovers it's a diamond ring and it's attached to a severed hand. He must find Detective Radhauser and fast.

Winston Radhauser has always searched for the truth. Set just eight months post 9-11, a young Islamic family is terrorized, and the severed hand is only the beginning. This time, Radhauser is tested to his limits, but will the truth devastate him?
click to open popover

Lora S.
5.0 out of 5 stars Scary good
Reviewed in the United States on 18 March 2020
Verified Purchase
Marsha Parsons has been murdered. Winston Radhauser’s old friend, Homer Sullivan has found her hand in Lithia Park while walking his pet raccoon. Just her hand.

But who can have done this? As usual in Radhauser’s cases there is no shortage of potential suspects. There is her abusive husband. But he was out drinking that night, and it appears he may have been too drunk to have committed the murder. There is the next-door neighbor, who admits to having suspected Marsha of having abused her children. But the neighbor allows that Marsha seems to be doing better since her conversion to Islam.

There is Mr. Parsons’ co-worker, a Muslim man whose wife was Marsha’s best friend and the one to introduce her to Islam. Her husband, Ahmed Azami, was frequently harassed by Sherman Parsons at the butcher department of Costco where they both worked, partly because of his religion (the events in this book take place less than a year after 9-11), and possibly partly because he felt that his wife was less amiable due to her conversion. Ahmed seemed to be a little upset with Marsha because he thought she was encouraging his wife, Daria, to be too active outside the home.

Then there is another murder. Again, there are ties to the Azamis. The victim is their son’s baseball coach. Earlier the same day he was berating the boy because he struck out at the end of a close game. Ahmed Azami went up to remonstrate with him, and the coach knocked him down. Naturally, he was upset. And their day just got worse. After taking his pregnant wife and son home, Ahmed feels the need to go for a drive to calm down. After that they decide to drive together to the next town for ice cream. But when they are almost there, they are stopped by a police officer there, just because he doesn’t like the way they look. One thing leads to another, and the situation ends with Ahmed being shot by the officer. Daria calls Radhauser since he is about the only person she knows who might be able to help.

For a while, it looks as if Ahmed Azami may have killed the coach, but he doesn’t seem the type. The coach has other enemies as well. But there are definite indications that this killer is the same one who killed Marsha Parsons. Who can it be?

And then yet a third body turns up with severed hands – both hands this time. This victim is someone Radhauser knows. Who . . . ?

Oh no, oh no, OH NO! This one is too close. And too dangerous – it looks for a bit as if Radhauser may be the next victim.

Helen Hogan
5.0 out of 5 stars Goldner studies how grownups affect children from many angles
Reviewed in the United States on 21 March 2020
Verified Purchase
Red Hatchet Falls may be Ms. Goldner’s best yet.
She opens with an interesting character from another novel, Homer ‘Sullivan walking his pet raccoon finds a
severed hand. Her detective Radhouser may have a serial killer to catch. But before he comes to the crime scene, we
see him third base coach of his daughter Lizzy’s little league team. As coach and parent, he object’s to the umpire's
calling Lizzie out on her slide. But he explains to her that the umpire is always right, even when it hurts and even
when we are sure he’s not.
What a way to introduce a Muslem family whose son Kareem plays on a baseball team in the same league
as Lizzie’s team. Goldner is so realistic with her story of the playground brawl and bullies attacking the Muslim boy,
whose only retaliation is spitting on the leader. She must have been a wonderful teacher for she understands the
helpless and the aggressive equally.
Typical of our favorite detective, Radhouser has taken in a stray person, a young man who would rather
starve than live with his wealthy mother. Of course the fellow wins readers’ hearts for his kindness to Lizzy, his work
with the little league team, and his talent playing the piano. Cooper Drake works hard to earn his keep at the barn,
finding chores not even on his list such as mowing for Grace. Then when Cooper’s imperious mother visits, we see
why he refuses to live under her tyranny.
Radhouser’s first case is the murder of Marsha Parsons, brutally beaten and her hand severed. Despite
being sometimes brutal to her kids, she has befriended Mrs. Azami, mother of Kareem, the Muslim boy in Lizzy’s
league. Through the investigation, Goldner introduces several normal people, likable despite flaws in maybe her most
human book. Captain Murphy even apologizes for the first time in history.
The second murder involves Kareem’s baseball coach Brad Baker, a bully who berates his own son and
players in public. His hand was also severed and bore the marker drawing of adult holding a child, this time a man,
whereas Mrs. Parsons’ hand wore a woman and child. Though he despises the bully, Radhouser works relentlessly to
find the truth, even if it could involve his friend Ahmed. Goldner crafts the frustration within the detective as he
continues his job.
The final crime is the unwarranted police shooting of Ahmed Azami, Radhouser’s Muslim friend. Radhouser
cannot do much because it all takes place in a nearby city out of his jurisdiction. I’m glad our writer did not force a
happy ending on this event but left us with the feeling that injustice still needs to be fought.
One of Goldner’s main themes is how grownup actions affect the children they deal with—the principal’s
action with Kareem, Coach Baker’s effect on Landon, his son, and on the kids on his team. We see the contrasting
positive effects of Radhouser on his children, and on the school kids he creates the bullying program to help. He even
affects the Parsons kids, and Kareem who admires him. Radhouser also deeply affects Cooper Drake, who is
Goldner’s example of his mother’s disastrous effect on his life. In contrast to their mother, their dad’s girlfriend Cheryl
brings a potential saving effect for the Parsons kids. Readers of the series pick up on Homer Sullivan’s kind effect on
Rishima, the transgender girl. Part of crating the complete Cooper Drake, Goldner shows his great patience with his
ballplayers and his piano student Lizzie.
With a salute to symmetry, Goldner ends the novel with Kareem in the batter’s box to match her beginning.
Even the pet raccoon as new team mascot completes the wrapping up of the painful lessons her characters have
faced and worked through. Readers are tested emotionally and rewarded with the satisfactory feeling at the end.
What a fine job , Susa Clayton, Goldner!
Read more
One person found this helpful
Helpful
Sending feedback...
Thank you for your feedback.
Sorry, we failed to record your vote. Please try again
Report abuse

Diane Lynch
5.0 out of 5 stars Page turner. Really well done
Reviewed in the United States on 29 March 2020
Verified Purchase
Detective Radhauser Is on duty once again, solving horrific crimes. This story takes place not long after 9/11. People are ill at ease in general. The fear amplifies when any aspect of Muslim life arises. Some think all Muslims are terrorists. Detective Radhauser is doing everything he can to correct this misconception.

The evidence is a human hand. The investigation gets things going into high gear. If the owner
of this hand is still alive, they must find them.fast. All hands on deck to find out.

Radhauser is trying to solve murders and stop the bias against Muslims at the same time. Radhauser has a wife, two kids, and lives on a ranch. Like most dads, he’s trying to balance family and work obligations.
Radhauser is also dealing with the 9/11 backlash.

Unfortunately, another hand shows up. Radhauser has the added possibility that this is. A hate crime.
Life is complicated. Radhauser is there for family, friends, and his job.

This book covers a difficult time in our country. The author does a fantastic job portraying everyday life in a small town in our country after 9/11. All the characters are well developed, and there are some real characters in this book.

Cliffhangers throughout this book make it a page-turner. Red Hatchet Falls is the first book I’ve read that brings up 9/11. I am a New Yorker personally affected by the terror of that day. I've taken a while to gather my thoughts to write this review. I never thought about how middle America was affected until I read Red Hatchet Falls.

I recommend this book to everyone.
The author has written a murder mystery thriller taking place during an uncertain time in America. Red Hatchet Falls hit the nail on the head. Susan Clayton-Goldner really hit the ball out of the park with Red Hatcher Falls.
Read more
Helpful
Sending feedback...
Thank you for your feedback.
Sorry, we failed to record your vote. Please try again
Report abuse

Kenneth Lingenfelter
5.0 out of 5 stars Great murder mystery
Reviewed in the United States on 19 March 2020
Verified Purchase
Homer is walking his pet raccoon and finds a hand with a diamond ring on. Detective Winston Radhauser is the investigator on the case. And then another hand is found. A page turning novel is this series. Det Radhauser has his hands full with the murders and protests against Muslims. A story of hate and abuse.
Read more
One person found this helpful
Helpful
Sending feedback...
Thank you for your feedback.
Sorry, we failed to record your vote. Please try again
Report abuse