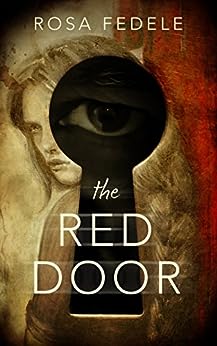 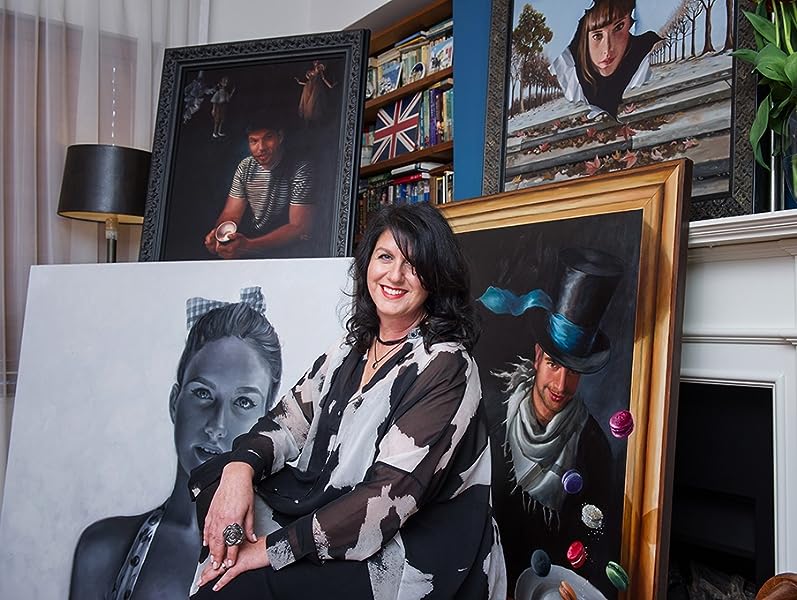 'For me, every painting and every book is a new adventure, started with a thrill of excitement and anticipation.'
Australian painter Rosa Fedele, known for her portrait and figurative work, was born in Sydney and studied at the prestigious Julian Ashton Art School. A member of Portrait Artists Australia, Australia's largest industry association for professional portraitists, and a regular contributor to Australian Fine Art and Decorative Painting magazine, her work has been exhibited in NSW Parliament House and Parliament House Canberra, as well as numerous galleries and exhibitions in Australia and worldwide.
Rosa fell avidly in love with books at a very young age. Her favourites were those by C.S. Lewis and Tolkien, and later on Raymond E. Feist, David Eddings, Anne McCaffrey and Frank Herbert; in fact, anything with beautiful and spellbinding words and imagery that would allow her to escape into other worlds. Her debut novel The Red Door is a fulfilment of her lifelong dream, to interweave a story with pictures ... and draw the reader into her own bewitching, and slightly dark-edged, world. --This text refers to an out of print or unavailable edition of this title.

Glebe, Sydney, 1983. ‘Rosalind’ is a beautiful old mansion, divided into apartments, gradually being restored by its new owner. The new owner, a woman whose name we don’t learn until near the end of the novel, is herself a bit of a mystery. One amongst many. Renovation of the mansion has challenges, some inexplicable occurrences, as well as a reclusive resident in Apartment 3.
And when the owner discovers that the man in Apartment 3 has the same surname as two teenage sisters brutally murdered over thirty years earlier, she is concerned. Can he be connected to the murders? They’ve never been solved. She becomes obsessed with the crime, obsessed with the tenant, and in danger of destroying her own newly-formed friendships.

I needed to concentrate while reading this novel: there is a lot of action, there are many different characters, with different perspectives to follow. The perspectives change frequently and can be confusing, especially as some of the characters have secrets to hide. All of this serves to heighten the suspense. I thought I’d worked out key parts, such as who had murdered the sisters, only to find that I was wrong. Sigh. I did work out other elements, though, and I found the actual solution more satisfying.

One element of the novel frustrated me: I could see no reason why the reader shouldn’t know the name of the protagonist much earlier in the novel. Why did that need to be a mystery, or was it simply a distancing technique? Overall, I enjoyed Ms Fedele’s debut novel, beautifully enhanced by her original artwork. Most of the different threads are brought to a satisfying conclusion. And, for those who wondered what the future might hold for some of the characters, Ms Fedele’s second novel ‘The Legacy of Beauregard’ is about to be published (in July 2018).

If you enjoy mystery novels and novels set in Sydney with more than a few interesting twists, you may well enjoy this.

MDG
4.0 out of 5 stars Thoroughly good read
Reviewed in Australia on 5 October 2015
Verified Purchase
Just finished reading The Red Door and really enjoyed. Not my normal genre of suspense/drama but was intrigued by both the cover and reference to Glebe in Sydney's Inner West. From the first chapter I found it hard to put down and found it very easy to visualize the many local parks, leafy streets and of course the Viaduct. Loved the many bizarre and interesting characters, many almost identifiable and certainly discoverable today in this vibrant inner city enclave. The multicultural challenges and domestic violence are disturbing but very relevant issues today. Thoroughly enjoyed.
Read more
Helpful
Report abuse

Mel | Mel's Bookshelf
4.0 out of 5 stars Great Read!
Reviewed in Australia on 13 October 2015
Glad to have found another Aussie book by an Aussie author to add to the list! I have been extremely unpatriotic through my life and have avoided Australian books. Only recently am I beginning to hugely regret this, as I have found some incredible books. I have wasted a lot of my life not reading Aussie books!! I am really enjoying the Australian settings, especially in my home city Sydney – So I was glad to review this book as it is set in Glebe.

The main character (who we don’t know by name until the very end), bought the mansion “Rosalind” after a troubling event from her past. She is in the process of renovating and refurbishing the whole place. Its going smoothly with exception of some strange events on the upper level, and the fact that the tenant in number three wont let her in, and she begins to suspect he may be watching her. She does a little digging only to find her tenant may be connected in some way to the vicious murders of two teenage girls that occurred twenty years prior. Her quest to find out what happened leads her to some stunning realisations that will shake up the comfortable life she has created for herself, and her new friends. Has she found a killer? What happened in her past to make her run away to Rosalind? And why is it so cold upstairs?

I must be honest. When I first started reading this I didn’t think it was going anywhere. It felt quite disjointed, went around everywhere and I was a bit confused about who was who. I failed to see the significance of all the characters and parallel storylines. And the writing, with the small sections that ended without an explanation, began to frustrate me. However I stuck with it and was extremely pleasantly surprised as the story began to unfold and I couldn’t put it down! Having finished it now I can appreciate how cleverly refreshing the writing was.

I loved the characters, especially Monique and Claudia. The main character and Anne annoyed me at times, but overall all the characters had their appealing qualities. I liked the main character a lot more after we learn of her back story. I enjoyed the romances and especially the complex – sometimes destructive friendships in the novel. And there were quite a few character twists to keep me satisfied! Especially towards the end of the book.

I would call this novel more of a mystery than a thriller, although it did have a few thrilling moments. However it was completely engrossing, especially in the last two thirds of the novel. The author also did the illustrations throughout the book which are beautiful, and definitely give the novel more character and texture. I only wish there was more of them, as they seemed to randomly appear at the beginning of some chapters but not others.

It was set in 1983, the year I was born, so perhaps I’m a bit too young to appreciate a lot of the early 80’s references, however this didn’t matter in the slightest. I have seen Duran Duran live (admittedly only because they were opening for Robbie Williams), so at least I wasn’t completely clueless!

Would I recommend it?

Yes for any mystery and thriller lovers and fans of 1980’s Sydney.

Many thanks to author Rosa Fedele for a copy of this novel in exchange for my review.
Read more
Helpful
Report abuse

Bibliophile
4.0 out of 5 stars Refreshing mystery tied to immigrant themes
Reviewed in Australia on 25 January 2017
This novel is a refreshing glimpse of immigrant Sydney couched in a plot that unravels an old murder mystery rooted in culture clash and physical abuse, difficult subjects to tackle but handled with aplomb by the author. The book starts with a woman’s observations about a neighbor that turn into an obsession. She does some digging and reveals he was involved in a tragedy from the past, and a host of secrets surrounding it. The plot was initially hard to get into, namely because it took a while to get to the actual mystery and seemed like a disjointed women’s friendship type story with numerous story lines. The story is told from multiple points of view, sometimes only a couple paragraphs in one character’s point of view, jumping in in mid-dialogue before abruptly switching to another POV, which lent an episodic feel rather than a narrative feel. When the story gets to the mystery, however, the plot starts taking shape and we see some of the previous character story lines woven in to the plot to wind up with a satisfying ending that brings justice. Chapters also have beautiful colour frontispiece illustrations by the author, as well as the cover, which are really a nice touch.
This is an honest review, the book was provided to me by the author for review purposes.
Read more
Helpful
Report abuse
See all reviews

Jennifer
5.0 out of 5 stars Well-constructed murder mystery set in Australia
Reviewed in the United States on 24 July 2017
Verified Purchase
The Red Door is a well-constructed series of complex mysteries set in Australia. I enjoyed the author's style, in particular her use of short fragments which slowly reveal more and more clues about the characters' dark pasts and their connections. Several characters have disturbing stories to tell; this is not a cozy mystery.
There are plenty of red herrings and I admit to not solving all of the mysteries before getting to the end!
I would recommend this book to murder mystery fans.
4.5 out of 5 stars.
Read more
Report abuse

Tina
5.0 out of 5 stars Five Stars
Reviewed in the United States on 24 October 2015
Verified Purchase
So good!! I did not expect all of that packed into one book. Great read!
Read more
Report abuse
See all reviews
Back to top
Get to Know Us
Make Money with Us
Let Us Help You
And don't forget:
© 1996-2021, Amazon.com, Inc. or its affiliates