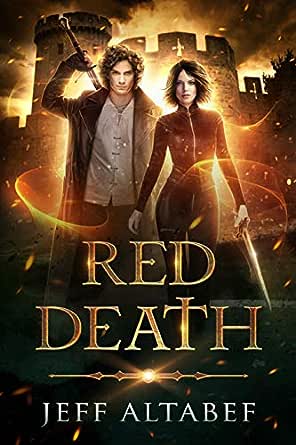 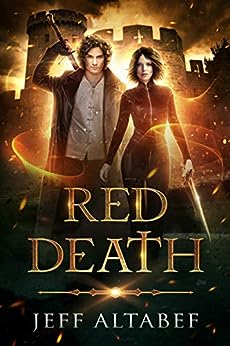 1) "A complex dystopian story recommended for older teens, its ultimate impact and winding, engrossing story will be welcomed and relished by not only this audience but new adult readers who appreciate the complex worlds and feisty protagonists of The Hunger Games and similar dystopian novels. In the end, it's more than just a story of teens surviving in their world; but a thought-provoking saga about belief systems and religion, courage, adaptability, greed and goals of ruling humanity, and a seemingly unstoppable juggernaut of change that rolls over everyone in its path. Red Death is ultimately about revolution, the kernel of which begins here, in a gripping story of two talented and determined siblings who reach out to connect with and embrace their world." Midwest Book Review 2) "Where dystopian novels are a dime a dozen, Altabef creates an epic tale that stands out. While the premise follows the pattern of the dystopian genre, the author twists the tropes into something fresh and imaginative. A perfect example revolves around the center of the dystopian genre: the corrupt government versus the lone protagonist. While Eden's government is co-controlled by a corrupt High Priest and President, not all who are a part of the religious sect are conniving or evil. Additionally, in the outside world, the government of the tribes are also a mix of corrupt and good individuals. In other words, the perspective of the world is not simplistic. Altabef does a fantastic job of making concepts thought-provoking and delightful to read. Red Death will appeal to a wide audience since it has something for everyone. It's action-packed, with plenty of chases and fights for those who enjoy adventures and drama. There are enough twists to surprise those who are intrigued by political intrigue, suspense, and cliffhangers. Amid kingdoms to unite, princes to save, and lives on the line, there is also a playful romance sprinkled throughout for those who desire some lightheartedness." US Review of Books --This text refers to an out of print or unavailable edition of this title.

AUTHOR: Jeff Altabef lives in New York with his wife, two daughters, and Charlie the dog. He spends time volunteering at the writing center in the local community college. After years of being accused of "telling stories," he thought he would make it official. He writes in both the thriller and young adult genres. Fourteenth Colony, a political thriller from Tate Publishing, was his debut novel. Evolved Publishing released his second novel, the thriller Shatter Point, in 2014, and will release his young adult fantasy series Chosen, co-written with his daughter Erynn, starting in the spring of 2015. Jeff has a column on The Examiner focused on writing, and a blog designed to encourage writing by those that like telling stories. You can find his blog, The Accidental Writers' Workshop, on The Chappaqua-MountKisco Patch.

EDITOR: Lane Diamond has over 120 published books to his editing credit, including many multiple award-winners, across many genres and styles. --This text refers to an out of print or unavailable edition of this title.

Erani Kole
5.0 out of 5 stars Wow, what an adventure
Reviewed in Australia on 14 December 2016
*honestly and voluntarily reviewed the ARC I received from Novel Publicity*

OH MY GOD. I love this thing. I had my doubts that it wouldn't be a book for me because it started off slow and there was a lot going on, but soon after, things started coming together, and then I got excited, and by the time I finished, I was near devastated that I didn't have the second book in my kindle. What is this injustice??

Loved the writing style. This was a multiple POV read with a lot of different plots going on, but the way it was written, with the pacing and reveals at every chapter, helped me to follow along. I loved the worlds and the different kingdoms/tribes that had their own things, it all seemed very intense and real. Loved the witches. What else did I love... ah, yeah. The characters. Aaliss was a stubborn person but I loved the strength she had, and I'm a romantic, so of course her time with a certain prince made things even better for me.

Long story short: this book is full of plots and excitement. I urge you to check it out.

Nicole Henderson
TOP 500 REVIEWER
5.0 out of 5 stars Secrets
Reviewed in Australia on 26 July 2017
This story is about Guardian Aaliss and her brothers Wilky and Peirs, they need to escape Eden because Wilky has made a discovery that could change everything. The eldest brother Peirs tries to make sense of everything when they are branded as traitors. Let's just say that believes will be bought into question and a war is brewing.
I received this book as a an arc read and I'm leaving my review voluntarily.
Would I recommend this book YES
Read more
Helpful
Comment Report abuse

TCH
TOP 500 REVIEWER
5.0 out of 5 stars You could be blown away.
Reviewed in Australia on 26 June 2017
This is the first time I have read any of Jeff Altabef's books so now I have a new author's series to follow.
Wow! This is an epic saga with many layers woven into the story! I didn't know exactly what to expect, the twists and turns and injustice throughout held me spellbound.
Aaliss and her brother Wilky run to save their lives and leave Eden to escape danger because her brother found a cure for the Red Death. So the adventure begins.
I look forward to reading the next book in the series.
Read more
Helpful
Comment Report abuse
See all reviews

Ansonia
1.0 out of 5 stars Stuffed
Reviewed in the United Kingdom on 3 June 2018
Verified Purchase
This book is 'stuffed' - ie there are active links throughout which take readers to the end of the book.
Read more
Report abuse

lynda
5.0 out of 5 stars A Great Read!
Reviewed in Canada on 26 November 2016
Verified Purchase
A very enjoyable tale. The start was slow, but built up to a great adventure. The characters are well developed with just enough detail. You keep turning pages wondering what will happen next. I'm looking forward to book two.
Read more
Report abuse

Kristen Lewendon
5.0 out of 5 stars Could. Not. Put. It. Down.
Reviewed in Canada on 2 December 2016
Could. Not. Put. It. Down. This is a twisty, tricky little book that will make you suspicious of everyone around you; like Aaliss and Wilky, you'll wonder who is worthy of your trust. I was pulled into a lushly imagined world that has a few too many parallels to our own for me to be completely comfortable; politicians with a lust for power and xenophobic cultures to name a few. The characters are so engaging and dynamic they feel like old friends by the end of the story. I cannot wait to see what will happen in the next book.
I received a complimentary advanced copy of this book.
Read more
Report abuse

Clo
2.0 out of 5 stars Quality of characters > quantity
Reviewed in the United States on 12 May 2018
Verified Purchase
I don't think I can finish. I made it to 62%.
No character feels developed; the scope of the story has become broad and shallow. Right when I start to get invested, I'm forced into another narrative POV that I don't care about, like a less-experienced, YA George RR Martin.
This universe comes with a lot of Deus-ex-machinas, feeling convenient and arbitrary; not to mention unrealistic (who keeps their city littered with invisible, lethal traps? During peacetime?? When literally most of the working population is under 12? And how did I go half a book without hearing about these traps from anyone else?).
The style is two-dimensional with obvious bad guys ("Everyone not like us isn't human and needs to be killed; it's God's will.") and Mary-Sue good guys.
The religious community refers to Jacob too much--their long-dead prophet. One character actually exclaimed, "What in Jacob's world! Jacob's braid, I thought a shadow had come to life." I'm over it.
The H/h don't meet until about 40%, and the physical descriptions are *gaggy*--lots of smoldering sapphire eyes that flicker in (enter any light source).
What bothers me the most, though, was that I got a sense of urgency about a character nearing death and needing a cure, but the H/h are taking their sweet time getting it, clearly to develop a romance. They keep stopping to make camp and chat around the fire.
The bare bones of an epic adventure plot are there, but everything else about it fell flat for me. The character reference guide wasn't enough.
Except Wilky. Hate the name, but I liked him, and by 62% he's the only character that I kind of want to keep watching to see what he'll do next.
Read more
8 people found this helpful
Report abuse

WyoGal
4.0 out of 5 stars Painted with bold strokes
Reviewed in the United States on 4 June 2019
Verified Purchase
The main elements of the story are present: characters with motivations, social divisions, religious tensions, those with tech and those with strange abilities, and a secret some are willing to commit murder for in order to keep secret. The story has good action/fight scenes. There are moments of dire tension. Several characters die. There is good imagery. There are hints of romantic tension, some bits of funny dialog, and some likable characters. The writing is mostly error-free. But, the subtle nuances are lacking. I can’t put my finger on exactly what’s missing other than to say the story seems almost formulaic and not organic.
Although some of the story elements seem forced, I forced myself to finish reading it. In spite of wanting to try reading something else, the plot was just interesting enough to keep me going to the end. The ending has a good moment and then is awkward. I had to reread the last sentence because it was poorly written. “Hunh?“ Is not the last impression a writer should leave in the reader’s head.
Read more
One person found this helpful
Report abuse
See all reviews
Get FREE delivery with Amazon Prime
Prime members enjoy FREE Delivery and exclusive access to movies, TV shows, music, Kindle e-books, Twitch Prime, and more.
> Get Started
Back to top
Get to Know Us
Make Money with Us
Let Us Help You
And don't forget:
© 1996-2020, Amazon.com, Inc. or its affiliates