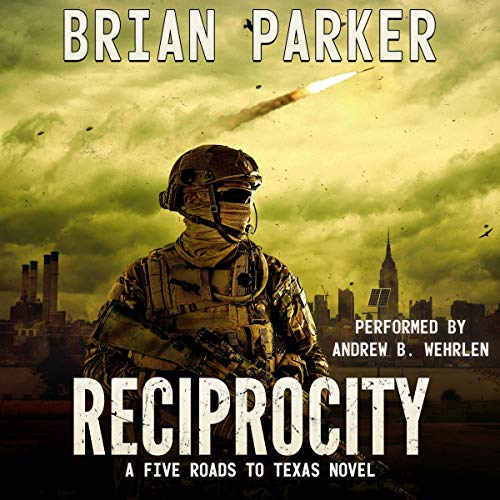 America, as we know it, is gone.

The survivors are being hunted. Foreign troops search daily for Sidney Bannister and her new family, systematically eliminating their means of survival. She’s gone on the offensive, but will her initiative bring further pain and suffering to the family?

Lieutenant Jake Murphy’s mission to Washington, DC, hit a major snag when they discovered that the nation’s capital was completely overrun and inaccessible. Will New York City hold the answers they seek or was their trip across country all in vain?

The remnants of the US Army, trapped at Fort Bliss, are desperate for answers as unknown forces intercept their communications, further isolating them from the fragmented government. Nearly a year after the rise of the infected, a road-weary traveler finally makes it back to the States with information that will change everything. Just how far is America’s military willing to go for revenge?

Follow the action as the Sidney’s Way storyline from the Five Roads to Texas series draws to an end.

Last chance - Ends Tuesday!
Learn more about membership
By completing your purchase, you agree to Audible’s Conditions Of Use and Privacy Notice.
Sold and delivered by Audible, an Amazon company
Share

BulB
5.0 out of 5 stars They say it’s the end for one character, but I see many opportunities for others!
Reviewed in the United Kingdom on 1 March 2021
Verified Purchase
I have loved this entire series from the Phalanx Press. Brian Parker seems to have done the lion share of pushing the narrative. I have really enjoyed a number of his books in this interconnected world.

So confession time, while Sidney wasn’t my favourite character, to find out this is the end of her story arc I was actually a bit annoyed. I guess I finally got to dig her and little Lincoln. I would have loved to read more about her and her team taking back Kansas, maybe linking up with some of the other characters still mixing it up.

While it was pleasing to read the conclusion of a number of series storylines. I was also very happy to see the beginning of new ones. One of which is hopefully a world of payback on those who released the “Cursed” in the world!
Read more
Report abuse

Paula Frances
5.0 out of 5 stars Another 5 from me
Reviewed in the United Kingdom on 18 August 2021
Verified Purchase
The whole series of books have been an amazing journey. A few surprises in this book. I can't wait to read more about Jake ( no spoilers) I would highly recommend this series. The authors have brilliant writing skills, and they have a way to make you feel like you have to just keep reading regardless of how late it gets 😂
Read more
Report abuse

Brenda C. Gill
5.0 out of 5 stars Great addition to the Five Road to Texas Series
Reviewed in the United States on 5 March 2021
Verified Purchase
I started reading this book on the day it came in the mail and finished it the next day. This must be the end of Sidney's storyline as the last words were THE END. I thought, "Oh No what is gonna happen with the other 4 people"? I hope some things in the book that were not tired up will be in Ian's story or one of the other 4 people whose story is still being told. This was a great book in the series and Brian Harper picked an excellent title for the book (Short possible spoiler coming up) as the United States does finally reciprocate to the ones responsible for the end of the World. As I said this was a great book and anyone who likes End of the World books will not be disappointed.
Read more
One person found this helpful
Report abuse

Matt
5.0 out of 5 stars Top notch as always
Reviewed in the United States on 6 April 2021
Verified Purchase
Amazing, exactly what I've come to expect from Brian's writing. He's writing is top notch the characters are incredible, the world that is painted will draw you in, I really love how fire roads has taken a life of its own with each author's bringing There's spin to the world, an amazing story i'm horrible With writing reviews but trust me when I tell you this you will not want to put this down.
Read more
One person found this helpful
Report abuse

Matt Keene
3.0 out of 5 stars not finished
Reviewed in the United States on 5 June 2021
Verified Purchase
waiting to long between books, no idea what's going on. Perhaps wait until series is complete.
Read more
Report abuse
See all reviews
Back to top
Get to Know Us
Make Money with Us
Let Us Help You
And don't forget:
© 1996-2022, Amazon.com, Inc. or its affiliates