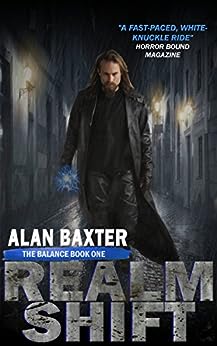 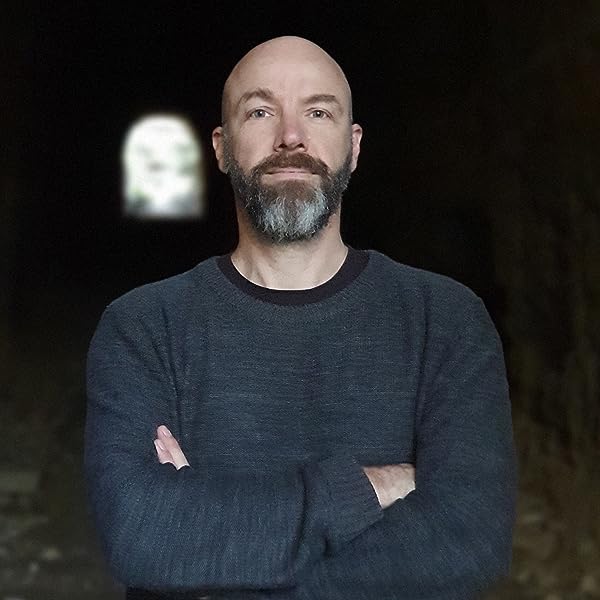 Lyn Haines
4.0 out of 5 stars An action adventure with a diffference
Reviewed in Australia on 21 December 2017
Verified Purchase
'Control a person's beliefs and you control the very essence of their being.'

I was just settling into the 'urban fantasy vigilante demon hunter vibe' when Alan Baxter took a surprising transcendental shift to the left, then a plot twist the right and seamlessly delved into ancient Mesoamerican mythology whilst engaging in philosophical discussions regarding the nature of belief.

RealmShift really is an action adventure with a difference.

Samuel believes himself clever enough to cheat the Devil. All he needs is the crystal skull recently discovered in a remote part of the Central American jungle and he’ll be immortal and beyond Satan’s reach.

Isiah’s been to Hell and back more than once, but as secrets are revealed, Isiah becomes aware that nothing is as it seems and that even for the most devilish of human souls, they still have their part to play.

I enjoyed this story. One’s beliefs can be a powerful thing and that is evident in this story from how Isiah came to exist to the people he encounters. A soldier in the balance between Good and Evil, the lines are blurred when it comes to doing what he needs to comply with the task he’s assigned. Sometimes as a reader, it’s easy to see the difference, but then the writer twists the story to another viewpoint and you question who is right, who is wrong, and if everything is as clear as it seems. I also liked the way magic weaved its way through the story and the hints and nods toward other supernatural beings and beliefs. Although this novel is a stand-alone, there is more to Isiah’s story in Mr Baxter’s second novel, ‘MageSign.’
Read more
Helpful
Report abuse

Paul Sheldon
5.0 out of 5 stars Unique, gritty and fast paced dark fiction
Reviewed in Australia on 31 July 2018
RealmShift sits somewhere in the dark fantasy/urban fantasy/horror/thriller genres, but saying that doesn't really do it justice. It is weird fiction at its best, combining plenty of supernatural elements (the Devil and the Archangel Gabriel just for starters) with grit, action and a good smattering of dark humour. All this is delivered at a breakneck pace without leaving the reader feeling like they are missing out on the details.

Writing fiction with such biblical characters is fraught with danger, and cliches often abound, but that isn't the case with RealmShift. It takes a unique approach to the whole subject of religion and faith without sounding the least bit like it is preaching, wraps it up in a great story, and delivers it in a very well written style that forces you to read 'just one more chapter'. The race to the climax is edge of the seat material.

A cross between Clive Barker and Neil Gaiman's American Gods. If you enjoy any of the above genres and are looking for something fast paced and a little different, definitely give RealmShift a try, followed by the sequel, MageSign.
Read more
Helpful
Report abuse
See all reviews

BrizzleLass
4.0 out of 5 stars Excellent take on the genre
Reviewed in the United Kingdom on 25 March 2013
Verified Purchase
I thoroughly enjoyed this book, it was not only an enjoyable and exciting read but also raised some fascinating theological questions which really gave me food for thought.

The concept of this book is well thought out, with just enough explanation to let the mind wander and question character actions, but there isn't so much explanation you feel spoonfed and bored.

I would love to see a follow up to this book with more character development. This really is a must read if you like some dark paranormal fiction.
Read more
Report abuse

msc
5.0 out of 5 stars riviting
Reviewed in the United Kingdom on 5 September 2020
Verified Purchase
found hard to put down ,had to keep reading
Read more
Report abuse

Yes, it's a page turner. It is a bit reminiscent of "Dresden", but only in passing. I will say, if you like "Harry Dresden" books, you're going to like Realmshift
Read more
Report abuse

Sookie
3.0 out of 5 stars Interesting concept but...
Reviewed in the United States on 13 August 2010
Verified Purchase
RealmShift is a difficult story to classify. It is a well-written dark fantasy with a detailed cosmology that feeds heavily into the plot, but the characters populating the story are less important than their purposes to facilitate plot continuity, which makes me hesitate to recommend it.

The plot revolves around Isiah, an immortal tool for the Balance, which facilitates change within the world by maintaining order between good and evil. Humans unknowingly create their own realities with faith, which brings all manner of gods and religions into the cosmology who exist because of the humans who believe in them. Isiah is tasked with rescuing recently-deceased occult-practitioner Samuel Harrigan from Hell after he reneged on a deal with Satan. The Balance wants Samuel to complete a trip he had planned to Guatemala (for purposes of acquiring a crystal skull) so that Samuel can kill mercenary-sociopath Carlos Villalopez, who in turn would have murdered American eco-journalist Katherine Bailey, whose presence will convince a tribe to receive inoculations and prevent the death of a god when the tribe dies out. (This isn't a spoiler, as the Balance tells all of this to Isiah within the first couple of chapters.)

I prefer character-driven stories. This is primarily why I found the characters in this novel--with the exception of Isiah--to be predictable and somewhat monotonous. The story shifts point-of-view between Isiah, Katherine, and Carlos as they all travel separately for different purposes to Guatemala where they will eventually intersect. Isiah is the most well-developed "gray" character who is neither good nor evil. Katherine represents the "good" journalist with noble intentions while Carlos is the "evil" mercenary out to kill/rape/torture anyone he comes across, and after the first few chapters in their p-of-v, I found myself becoming impatient to get back to the chapters featuring Isiah. The chapters of Katherine and Carlos were well-written and descriptive; I just found myself growing bored with these human caricatures. There's only so much murder and mayhem you can read before it all runs together. Likewise, I found myself wanting to roll my eyes after a few chapters of Katherine's good will toward men ideals.

The tone of the omniscient narrator is extremely distant and unemotional, almost as if the events are being relayed by a bored entity. I can see where this might have been deliberate on the author's part, but this style made it very difficult for me to become invested in the story, and easy to set the book down and pick back up as opposed to reading straight through.

The pacing was noticeably faster during the chapters featuring Isiah, as those are the only ones containing fantastical elements (fight scenes with Satan and his minions, dealing with archangel Gabriel and a group of vampires); particularly engrossing was the scene when Isiah journeys into Hell to steal Samuel's soul from the devil. Carlos and Katherine chapters are mired in reality. I honestly think this story could have benefitted from cutting some of the chapters focusing on those two characters as they don't seem to serve any purpose other than representations of opposing forces. Had the novel focused solely on Isiah's journey with Samuel--a wretched human being who Isiah is forced to protect from Satan--I probably would have enjoyed it much more. One irritation I had was the manner in which Isiah dealt with Samuel: a murdering scum who kills two people right in front of Isiah during their mad rush to escape the devil. Isiah kept threatening Samuel with dire consequences but never followed through when Samuel called his bluff. As an immortal being, surely he could have enacted some kind of psychic smack-down without killing him? I was also mildly disappointed by the very Christianized physical description of the devil and Hell when the cosmology of the novel encompasses so many different religions.

Aside from these, I enjoyed the story for what it was. The plot was interesting and the ideas suggested have a very "Matrix" feel to them, questions upon questions upon questions type of thing. There is a sequel advertised on the last page, and honestly, I have little or no interest in reading it. Isiah was an interesting character, but the end of the story had a very "pat" wrapped-up feel, and I would have preferred a less predictable close to a dark fantasy novel.
Read more
2 people found this helpful
Report abuse

In a world where every god and demon from every culture is exactly as
real as its followers believe it to be, Isiah is an immortal enforcer
for the Balance, a meta-deity that polices these strange and contrary
powers.

The story here is quite straightforward without being simple. The
Balance tells Isiah what it needs to happen early on in the book--the
fun is in seeing how it all plays out. There are plenty of twists and
wrinkles in the plot, but the story goes exactly where it's intended
without ever cheating.

The characters are deftly drawn. Even though there are greater forces
are dragging them into the conflict, the humans do their best to make
their own choices. The story really does hinge on what they have
learned throughout their journey. For all his power, Isiah is not
allowed to directly enact the Balance's will: his role is to prevent
gods and demons from interfering with ordinary humans.

Isiah himself is a bit seedy for a superman, which makes helps make
him sympathetic. He's quite moral, like the Balance he serves, but
he's a long way from being a saint. He's a man with a dirty job to do;
he's allowed to complain every now and again.

I'm a sucker for a good villain, and Carlos Villalopez, the primary
antagonist, is twisted and vicious and still sympathetic. Samuel
Harrigan, who is perhaps the real villain, is a talented psychopath
upon whose damned existence the Balance hangs. Much as Isiah despises
him, he has to protect the vicious bastard throughout the book and I
enjoyed seeing the hero compromised in this way. This dynamic makes
the book for me.

RealmShift does slow down through the middle as some of the characters
have to literally waste time while the rest of the pieces get in
place. Baxter fills this with exposition about the cosmology and the
way that 'magic system' works. To his credit, this never really feels
like an info dump--although it does drag a little. But even when the
pace of the story slowed, RealmShift never lost my attention.

This book is generally quite pacy and there are a few occasions where
it surprises you with a sudden laugh or an unexpected moment of
contemplation. The action scenes blend martial arts with magic without
getting breathless or self-indulgent. Dialogue is good and natural,
although on rare occasions the American characters sound British.

A good smart read. This is multi-genre spec fiction done right. I had
a great time with RealmShift and I'm looking forward to the sequel,
MageSign.
Read more
One person found this helpful
Report abuse
See all reviews
Back to top
Get to Know Us
Make Money with Us
Let Us Help You
And don't forget:
© 1996-2021, Amazon.com, Inc. or its affiliates