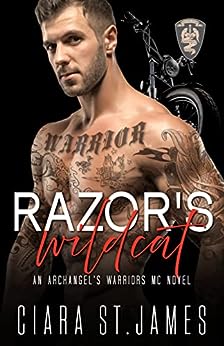 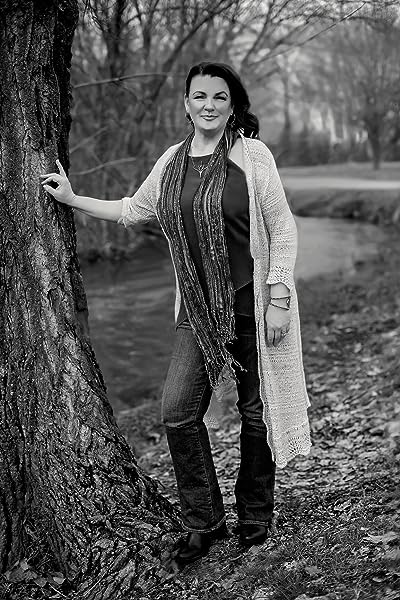 by Ciara St James (Author) Format: Kindle Edition
See all formats and editions
Sorry, there was a problem loading this page. Try again.

Razor didn’t think he wanted to be tied down like his club brothers. Different was the spice of life. Even when the beautiful dog trainer caught his eye, he did everything he could to stay away and to not respond to her smiles and conversation.

Talia had never wanted a man like she wanted Razor, but at every turn, he ignored her or rejected her. She had to face it. He wasn’t interested. One night, he showed her something that made her think it was time to move on.

When Talia disappears, Razor knows he’ll do anything to get her back and to show her how he really feels. Only when he does, can he keep from hurting her again? An angry act leaves her doubting him and what they have. Will she stay? Will she go and leave him a husk of a man? Only time will tell what the ultimate story is with Razor’s Wildcat.

WARNING: This book is intended for adult readers. It contains coarse language, adult situations, discusses events such as stalkers, assault, torture and murder that may trigger some readers. Sexual situations are graphic. There is no cheating, no cliffhanger and it has a HEA.

I'm a sassy Libra bookaholic who has been reading since I was six years old. I love the written word and numerous genres, but romance has always been my favorite! I devoured books like it was food.

I grew up in Rural southeastern Ohio in a village of 4000 people. Then I married and went to San Diego where the population was several million, quite the change I can tell you!

Today, I live in beautiful TN. And I'm ruled by two pugs who try to get me to stop writing and be their sofa. If I don;' read every day, I become antsy. But with the writing, I have to wait and make Sunday my day to read for pleasure.

2019 I took the plunge and quit my nursing job to dedicate my time to writing. It had been a life long dream. find I like all romance but have a particular love for steamy romances that have danger, alpha males and strong females with danger and sometimes suspense. Currently, I've been writing Motorcycle Romances but I plan to do others. My biggest dream would be to have others read and receive joy from my books as I have from several of my favorite authors! Please let me know what you think of my works. You can find me on Facebook at www.facebook/ciara.stjames.1 or try my Tenillo Guardians group or Ciara's Angels.

4.6 out of 5 stars
4.6 out of 5
407 global ratings
How are ratings calculated?
To calculate the overall star rating and percentage breakdown by star, we don’t use a simple average. Instead, our system considers things like how recent a review is and if the reviewer bought the item on Amazon. It also analyses reviews to verify trustworthiness.

Addicted To Reading
1.0 out of 5 stars Unforgivable
Reviewed in Australia on 21 October 2021
Verified Purchase
When a man you fall in love with kisses another woman, what would you do. Apparently you forgive him and treat him like he's a sex god. Nope. DNF.
Cheating is a major turn off, to seek out another to get relief. Wow. Then turn around and claim the heroine because of his guilt. DNF this crap. Using a woman in a way like this character did and treating that woman like dirt because he has eye's on another woman. Crap.
Read more
Helpful
Report abuse
See all reviews

Linda Brown
5.0 out of 5 stars Good
Reviewed in the United Kingdom on 28 October 2021
Verified Purchase
I really enjoyed this book. It's got a good story line and has twists and turns a plenty. Well worth reading
Read more
Report abuse

Kindle Customer
4.0 out of 5 stars Shenanigans and hot fun
Reviewed in Germany on 2 November 2021
Verified Purchase
Love the usual relationship shenanigans, the sweet, the angry and the hot. Bunny trouble as usual, will they never learn? Razor‘s mouth caused most of the trouble though but he does learn the hard way. Nice surprises too. All in all another fun ride.
Read more
Report abuse

Christine Hall
5.0 out of 5 stars Another great read!
Reviewed in Canada on 26 October 2021
Verified Purchase
This book, like all of Ciara St. James' books doesn't disappoint. It is filled with angst, a Hero who messes up but finds the right path with a few twists and turns before love conquers. Thanks Ciara!
Read more
Report abuse

SassyKebKerr
5.0 out of 5 stars How does he go about correcting the epic mistake he made?
Reviewed in the United States on 25 October 2021
Verified Purchase
Razor isn’t sure how to act around Talia, but when he decides to keep his mouth shut about his feelings and intentions for her, everything goes wrong. Especially when Talia sees him with another woman hanging off him and kissing him. He never had any intentions of settling down with one woman, but Talia isn’t just any woman, she’s special and she’s his. Now he just has to show her and prove to her that it’s only her that he wants.

When danger finds Talia, Razor is beside himself and going crazy trying to find her. The only trouble is when she’s found, will she want anything to do with him?

I love the Archangel’s Warriors. The characters in these books are great! Not only the AWMC characters, but the other clubs and special ops groups as well. Ciara St. James stays true to her characters in all of her books. She writes Alpha, sexy, dangerous men and strong, sexy, independent women. The women can take care of themselves, but they also know when to let their men take care of them. I love the stories surrounding the characters as well. Razors Wildcat is a great story with a lot of angst, danger, steamy scenes, and the crazy that goes along with the Archangel’s Warriors characters HEA. I loved it and give it a 5-star review. If you are looking for MC romance with strong, independent characters that suck you in from the first page, you should pick up any of Ciara St. James’ books to read.
Read more
2 people found this helpful
Report abuse

Leslee Nevill
5.0 out of 5 stars She gives Razor a run for his money!
Reviewed in the United States on 19 October 2021
Verified Purchase
Talia is definitely one of my all time favorite heroines in this series! She is resourceful and stubborn. She has a temper and while it flares hot, it can die down to a smolder while she makes a plan. She gives Razor a run for his money and his mistakes almost cost him dearly. There is some good groveling if you enjoy that; I know I do. The MC family keeps growing and its that family atmosphere, the support and help when things go awry that makes this world so appealing. They are truly the perfect illustration of family by choice, not just blood. I adore this series, its one of my favorites. The suspense that is woven into each of the books keeps me on the edge of my seat, I love it. I can't wait for the next member to fall!
Read more
One person found this helpful
Report abuse
See all reviews
Report an issue
Does this item contain inappropriate content?
Report
Do you believe that this item violates a copyright?
Report
Does this item contain quality or formatting issues?
Report