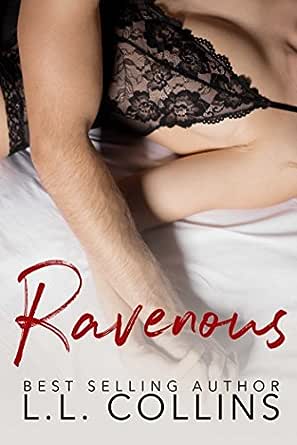 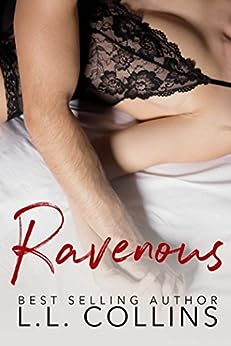 Sarah V
5.0 out of 5 stars Another awesome read by L
Reviewed in Australia on 23 April 2017
Verified Purchase
Another awesome read by L.L. Collins! She releases, I buy. This story kept me wondering and captivated the whole way through. Lots of feels experienced throughout. I thoroughly enjoyed and definitely recommend.
Read more
Helpful
Report abuse
See all reviews

chrissycf
4.0 out of 5 stars A Unique and Sexy Romance
Reviewed in the United States on 27 April 2017
Verified Purchase
L.L. Collins has another hit with Ravenous! This book has angst, drama, and a story that will grip you from beginning to end!

Raven has had a rough upbringing, so she's doing everything she can to better her life and help get her sister out of the life she's in now, so when she's offered a job that can help get her the money she needs to help her younger sister Chrissy get out of her mom's care sooner rather than later, she's hesitant, but ultimately takes the job. When her first date ends up being with Porter Kingsley, the sexy surgeon she hits the jackpot, but she didn't realize his sexy twin brother Breck saw her and wants her too. This leads to an interesting story and Raven figuring out who she is and what she ultimately wants in life.

I loved watching Raven trying to figure out what she really wanted, and trying to figure out why she should stay away from the Kingsley brother's. One was the go to have fun with no strings attached buy, and the other was the "forever guy". She in her heart knew which one she wanted, but her head and her heart couldn't ever get on the same page, and this brought a lot of angst in this book. Trust me, at times you will want to throw your Kindle across the room for getting so frustrated with her. Not only is she going back and forth with these two guys, which I will say she isn't even seeing, she just can't get them out of her head, but she's dealing with her sister, and trying to be a good role-model for her, and trying to get through school. Raven is more grown up then most grown ups I know in real life. Her life isn't easy, and throw in trying to have a love life, and her life is crazy!

For being the youngest of the three main characters in this book, Raven to me was the most mature of all of them. She thinks things through and is always thinking of how her decisions are going to affect her and her sister. She puts Chrissy first in all of her decisions, where Breck and Porter hold resentment towards each other but don't talk to each other about it, and act as if everything is fine. They are both amazing men in their own right, but children at the same time. I did have my favorite of the two guys, but I won't say which, because I want you, the reader, to pick your favorite, and also because the other brother is getting his own book this summer, so I hope he ends up becoming more likeable in that book as well.

This book was a great story, but I felt as if we had so much build up to Raven finally figuring out what she wanted, and then BOOM it was over. I wish we could have had more of what it was like seeing her make that decision, and seeing her get her HEA, after seeing all of the struggles it took for her to get there. I loved how much her character grew in this book as well as how much all of the characters grew. It sucked seeing Emma's character sort of disappear in this book though since she was a huge part in the beginning of this story. I really enjoyed how this story progressed and the characters in this book. If you're looking for a unique romance to curl up with I highly suggest picking up Ravenous today!

Ebs
5.0 out of 5 stars LOVED!!!!
Reviewed in the United States on 21 April 2017
Verified Purchase
I loved this story. Everything about this story was amazing. It kept me glued to my kindle or phone the entire time and I couldn't stop once I started.

When the story unfolds you learn Raven's motivation to do what she decides to, and how could you not love her for it; especially since she's lived through so much for someone so young. The money is great, and is more than she could've ever imagined making. It is also helping her get closer to her goal. I'm sure when she started this venture she wasn't expecting to like it, let alone fall in love. And with two men nonetheless.

Raven has always had to make her own decisions, but this is one that she preferred not to touch. But knowing she had no choice, she finally decides who she wants, and I couldn't agree with her more. Don't get me wrong both guys were gorgeous and sexy in the own ways, but I loved who she chose more than the other.

Seeing Raven get everything out of life that she deserved was great to read. She was given a crappy situation at the beginning stages of her life, but she had the ability to persevere. Gotta love that in a girl.

Overall, I would classify this as a definite must read. It grabs you from the very beginning as does not let you go until you read "The End". It'll have you in such a reading trance that you'll finish this in one sitting. It is worth the time it'll take you to read it so do yourself the favor and invest your time. You will not regret it.
Read more
Report abuse

Missy Harton
5.0 out of 5 stars "I was twenty-one years old with more baggage than an airport."
Reviewed in the United States on 26 April 2017
Verified Purchase
This is my first L.L Collins read. Ravenous is a fantastic 5 STARS read. The characters are strong, vulnerable, and connect on so much more than just a physical leave. It's impossible not to feel the freight, tension, determination, and adoration that spills from the pages. Taking on her new persona, Janie is forced to make some tough decisions in order to give herself and her sister a chance at a better life.
"A professional at pretending," Janie had to train herself to be "confident, sexy, and always in control." With no father and a mother that could care less, she knew all too well what see needed to do to accomplish her goals. Attaching her heart was never the plan. See how "Ravenous" her heart and body become as she is sought out by a set of identical twins; each wanting her for different reasons!

Andrea Danielle
5.0 out of 5 stars Addicting!!!
Reviewed in the United States on 20 April 2017
Verified Purchase
LL Collins has been one of my automatic one click authors since I read her first book. This is now her 13th book and once again she has blown me away. She NEVER disappoints. EVER.

This book has all the FEELS!! You've got a bit of mystery in the characters, there's angst, and there's hot sexy bits that will leave you breathless.

Raven, Breck and Porter will have you hooked and as LL words flow you will fall in love. Highly recommended.
Read more
Report abuse

Marychell
5.0 out of 5 stars I loved Raven and Breck's story
Reviewed in the United States on 25 April 2017
Verified Purchase
Raven and Chrissy's story broke my heart. Wow I so want to beat Port down, yes y apologized to his Breck and Raven but still you don't do what he did to his bro especially his twin brother that's like crime number 1 in bro code.
Read more
Report abuse
See all reviews
Back to top
Get to Know Us
Make Money with Us
Let Us Help You
And don't forget:
© 1996-2021, Amazon.com, Inc. or its affiliates