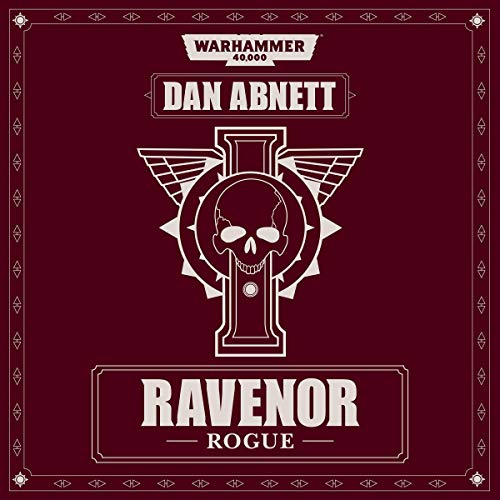 4.5 out of 5 stars
4.5 out of 5
42 global ratings
How are ratings calculated?
To calculate the overall star rating and percentage breakdown by star, we don’t use a simple average. Instead, our system considers things like how recent a review is and if the reviewer bought the item on Amazon. It also analyses reviews to verify trustworthiness.

Woofdog
4.0 out of 5 stars Great Abnett story, comment follow
Reviewed in the United States on 1 June 2007
Verified Purchase
This is a very good addition to the Ravenor series. My comments contain spoilers.

Abnett resolves the multi-book plot of the search for Molotch, the Slyte daemon thread, and adds a few surprises to boot. My thoughts and comments are as follows -

Molotch - Abnett, more than any author I can name, creates challenging, competent villains who are usually the equals of the protagonist. This is unlike many authors (including BL authors, some of whom just offer comic-book antagonists), and is a strong point of this book and series in general.

Early introduction of the Door allowed it to be used in the climax without too much of a taste of Deus ex Machina, though I got some of that anyway. The Door, on the other hand, would certainly seem to defy much of what is established in W40k (instantaneous travel through space and time). The only thing I have heard of this type of thing involved the emperor's project on Terra before he was not-killed.

Visit to 404, M40 - when the party escapes, how did the sword-woman (forgot the name) get her sword back? That would be kept in an evidence room or an armoury, not in the medical area. For that matter, how did they even escape, Nurse, the Chair and all, and get off the base? It seems like he skipped over writing something that might have been very hard to write believably.

I had been annoyed since the first book about Thonius's issue and the apparent blindness of Ravenor to obvious circumstantial evidence in books 1 and 2 - in fact, I had wondered if Abnett was going to write book 3 with Ravenor having suspected all along, but nope.

This book was kept to what seems to be a BL-standard 300 pages. I wonder how much material Abnett had that didn't make it into this book. The ending reminds me some of the Eisenhorn trilogy ending despite us being given far more detail here about Ravenor's probable fate. Unlike his recent Armour of Contempt, I think he was able to get a good story in 300 pages here. I do with BL would consider raising this cap.
Read more
6 people found this helpful
Report abuse

Kindle Customer
4.0 out of 5 stars Good book
Reviewed in the United States on 23 January 2020
Verified Purchase
Good book, 3rd one I read in series. Left you hanging at end with some of the characters and disjointed timeline, but not a book you give up on.
Read more
Report abuse

Tony Ogle
3.0 out of 5 stars Not Abnett's best, but still entertaining.
Reviewed in the United States on 22 February 2008
Verified Purchase
I've been following Dan Abnett's work for the Black Library (publisher for Warhammer 40k) for some time now, and the Ravenor trilogy is a natural outgrowth of the Eisenhorn series. Eisenhorn was great. Ravenor is ok. This book works hard to tie up loose threads from the other two. Readers finally see the end of a dread foe. Usually, I'm keen to see what Mr. Abnett has come up with to bring it all together. Though this book had some interesting twists and concepts, I'd have to say it wasn't quite as good as its predecessors. Of course, if you already read the other two, you really sort of have to read this one, don't cha?
Read more
One person found this helpful
Report abuse

Erin K. Adams
4.0 out of 5 stars Good
Reviewed in the United States on 6 May 2017
Verified Purchase
It was a gift and it was liked by the person who read it. It was good for him to get.
Read more
Report abuse

Ubai
4.0 out of 5 stars A good, solid book!
Reviewed in the United States on 2 June 2007
Verified Purchase
Dan Abnett is one of my favorite authors, and is definitely one of the best of those who write for game franchises. You can always count on him to deliver a good, solid adventure story, and Ravenor Rogue is no exception. Although I preferred his Eisenhorn series, Ravenor and his team are good fun too. If you like 40k and you love a good read, you could do worse than to pick this one up!
Read more
3 people found this helpful
Report abuse
See all reviews
Back to top
Get to Know Us
Make Money with Us
Let Us Help You
And don't forget:
© 1996-2021, Amazon.com, Inc. or its affiliates