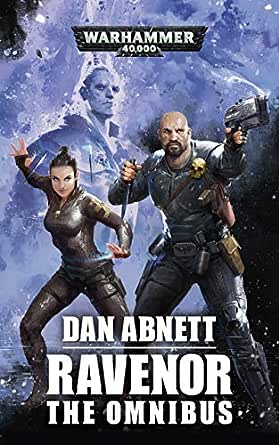 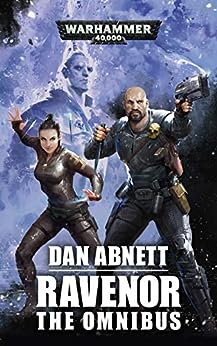 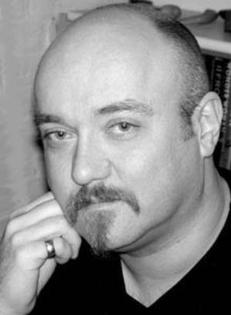 The Black Library's best-selling author, Dan Abnett, once again shows why he's the master of action and suspense!

Inquisitor Ravenor and his followers investigate a daemonic conspiracy that stretches across space and time in three classic novels by Dan Abnett.

READ IT BECAUSE
The complete story of Gideon Ravenor's greatest triumphs – and greatest failures – brings together a cast of compelling characters thrust into a mission that tests them all to their limits. None of them are quite what they seem, and all of them have a story to be told. And some of those stories are brutal and end very, very messily...

THE STORY
In the war-torn future of the 41st Millennium, the Inquisition fights a secret war against the darkest enemies of mankind – the alien, the heretic and the daemon. When Inquisitor Gideon Ravenor and his band of lethal operatives are drawn into a conspiracy to spread the taint of Chaos across a sector, their investigations take them into the gravest peril through space and even time. Wherever they go, and whatever dangers they face, they will never give up until their mission succeeds.

Kelli B.
5.0 out of 5 stars Dan Abnett did so good, I just went and purchased everything he wrote in the Warhammer 40K Universe!
26 June 2016 - Published on Amazon.com
Verified Purchase
Excellent work! After first reading Eisenhorn by the Dan Abnett, I read this. Absolutely love the author and the gritty future he describes. You'll love the detail and the action is very well balanced with plot progression. Sci-Fi and Mystery combine to a series of adventures that never go as you predict. As soon as you think you figured out the plot and try to tie a bow on it, a Chain-Sword or Las-Pistol rips the story right back open. Boys notice girls, but nothing more than PG-13. The violence and gore are shockingly well done and aren't a distraction, but scare the heck out of you and makes you really worry about the safety of your band of heroes. I'm really not the kind of guy who likes gore and such, but this is awesome! You can "see" the action as...just buy it already!
Read more
8 people found this helpful

Isehara
3.0 out of 5 stars Could and should be better
30 January 2013 - Published on Amazon.com
Verified Purchase
I evaluate books on the following criteria:
A) the setting/world and the vibrancy of it
B) the characters and how much we can empathize with them
C) the plot
D) the overall quality of the writing and what the book teaches us.

The Warhammer world is a an amazing far future universe set in the 40,000 year. It is filled with technology, mystical, huge Blade Runner type cities, super warriors, Chaos gods, etc. If you have read any of the RPG works the universe is extrememly well and intelligently fleshed out. I would say it is one of the most intelligently thought out envirmonents in fiction. It has its own legends and story from the past, something like Lord of the Rings and the myths of earlier eras that Tolkien writes of. Many authors write books which are set in this universe.
Previously I never read any of these Warhammer books because I associated 40K with tabletop gaming and roleplaying; however they have a great fiction book set about this world. The stories, myths, and the past of the W40K world are just amazing. A huge part of reading these books is to get a little bit more information about this universe. in my opinion this is a big saving grace of many of these books. The reader wants to know more about the universe, so is willing to accept a lower quality of work.

A) This is where Abnett does a good job. He describes the city environment of Warhammer 40K very well. You can feel the hopelessness of enormous "hive" cities which are choked with people and decay. This seems to be the setting for most of his work. Some of his other works evoke memories of James Bond like assaults on pinnacle fortresses, etc. I think that his city descriptions are the best.

B) The characters need to be improved. Gideon Ravenor is a govenment agent, and he is surrounded by his team. All of the characters are somewhat thinly described. It is not easy to understand their motivations and feel them as solid people. There are too many characters and villans doing too many different things, something that is hard to keep track of. In my opinion he needs to cut down on the number of characters and describe those present in greater depth.

C) The plot is haphazard and Abnett introduces too many characters, sometimes with similar names. It was hard for me to follow what was happening at times and why people where doing different things. I get the feeling that he was trying to have too many plot threads and characters, and does not stitch them into a cohesive whole. A huge weakness is that Abnett does not know how to close out the book and plots properly. It is almost like the ending comes because he met his number of pages writing requirement. He does not build a proper plot with a dramatic ending; it is more like 10 pages from the end the story all of a sudden ends and the villans die. I was unsatisfied with his endings and villan deaths, something that is properly done in better works. Many of the villans come up with grand planet shaking schemes - these all fall apart in the last few pages of the book.

D) Overall I would give the book a 80/100, or a B-. I plan to read them again because I would like to see if I understand them a better the second time. I also really enjoy the world of Warhammer 40K, so for me his books are a romp through them. But I believe that the plot and the characters can be improved. One thing I like about his works is that they focus on detective-like plots through the Warhammer universe. Many Warhammer books focus on Space Marines and their fights - Abnetts works Eisenhorn/Ravenor are about far future goverment agents.
Bottom line - This book is worth reading and forming your own opinion of. I recommend you also give the 40K universe a try.

Over the past 2 years, I've been on a fiction kick, and probably read 80% fiction now.

At this point, I've read about 50 Black library (Games Workshop's says all their books come from there or something, I haven't tried to figure it out yet.)

I've been enjoying the world of Warhammer 40,000 for the most part and even started getting heavily into the board game.

Personally, I prefer to read books in order, so I'd recommend reading these books in order. Einsenhorn is the first and Ravenor is the 2nd in the series.

From what I can tell, Dan Abnett, the author, is considered the Steven King of the Warhammer/Black Library writers. My favorite aspect of his writing is the incredibly vivid characters, worlds, and battle scenes he creates.

This book brings one aspect of the Warhammer world, I had not seen yet: Psychic powers.

This was meant to be a quick review, so I didnt carefully consider every aspect, but I hope it was helpful.
Read more
5 people found this helpful
Go to Amazon.com to see all 71 reviews 4.3 out of 5 stars
Get FREE delivery with Amazon Prime
Prime members enjoy FREE Delivery and exclusive access to movies, TV shows, music, Kindle e-books, Twitch Prime, and more.
> Get Started
Back to top
Get to Know Us
Make Money with Us
Let Us Help You
And don't forget:
© 1996-2020, Amazon.com, Inc. or its affiliates