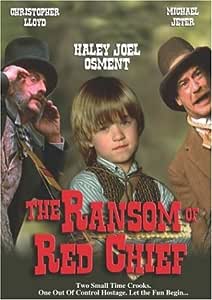 The Ransom of Red Chief

In this uproarious action-comedy, two bumbling neer-do-wells, Sam (Christopher Lloyd) and Bill (Michael Jeter) kidnap Andy Dorset (Academy Award nominee, Haley Joel Osment), the mischievous nine year old son of Ambrose Dorset, a pompous banker and civic leader. Andy is convinced by the duo that he involved in a madcap adventure and pretends to be Red Chief, a fierce Indian warrior. Andy is known for his wild imagination, so when his father receives a ransom note for only $47.50, he thinks its a prank. But when two dangerous convicts have escape from prison, Andy may finally be in real danger...

4.5 out of 5 stars
4.5 out of 5
107 global ratings
How are ratings calculated?
To calculate the overall star rating and percentage breakdown by star, we don’t use a simple average. Instead, our system considers things like how recent a review is and if the reviewer bought the item on Amazon. It also analyses reviews to verify trustworthiness.

Patti K. Johnston
4.0 out of 5 stars This was a great story. The reason for giving 4 stars instead ...
Reviewed in the United States on 18 March 2015
Verified Purchase
This was a great story. The reason for giving 4 stars instead of 5 is because the cover art is misleading. I have been searching for quite a while for the DVD version of this movie that starred Jack Elam and the young child, Pat Peterson (he also played Michelle Lee's youngest son on Knots Landing). Pat Peterson appears on the cover of the box, as advertised, however, when the DVD is played, the young boy and his abductor (originally played by Jack Elam) are two completely different actors. I'm keeping this DVD, since, as I stated earlier, it is a cute movie, but I felt the cover art was a misrepresentation of the product.
Read more
5 people found this helpful
Report abuse

Ron
3.0 out of 5 stars Enjoyable But--
Reviewed in the United States on 9 August 2018
Verified Purchase
I would have rated this four Stars, but it deviated to much from the Original Movie for TV, that I watch back in 1958. The Characters and acting was good especially, little Haley Joel Osment as Red Chief. O'Henry's original story-line is great and funny reading plus the TV Movie version back in the Fifties which followed the script was enjoyable for all ages. This remake unfortunately, deviated to much from the plot and although pleasant and similar lacked the humor especially the ending. This film is still good but lacks the ingredients to make it entertaining for all ages.
Read more
Report abuse

T.NAKAJIMA
3.0 out of 5 stars (2.5 STARS) Lots of Silly Jokes, Not Exactly O Henry's Classic Story
Reviewed in the United States on 30 December 2010
Verified Purchase
"The Ransom of Red Chief" is of course one of the most famous stories of O Henry. I think everyone knows the story of the hilarious misadventures of two "kidnappers" and one mischievous boy, so I won't repeat it here. Like "The Gift of the Magi" or "The Last Leaf," the 1910 short story is now part of our culture both in and out of America.

Sadly the 1998 made-for-TV version, loosely based on the beloved O Henry story, is not very good - not because of its numerous departures from the original source material (I'm kind of a guy who enjoyed "Oliver!" and its dancing Fagin), but because of the film's too slow pace and unfocused direction, especially in the first half. There are many silly and incredibly corny jokes, which are mostly sight gags or slapstick including the boy's pompous father stepping on a roller skate (not a banana peel).

For me the problem is that director Bob Clark often forgets his job as a storyteller, desperately trying to make us laugh with silly jokes. Actors are all doing their best - Christopher Lloyd and Michael Jeter are very good as a pair of small-time crooks, and so is Haley Joel Osment as the little boy. Only that they deserve better material than making faces.

Those who remember Bob Clark as director of such films as the 1982 hit teen comedy "Porky's," or more recently, inept and crude "Baby Geniuses" (in which Christopher Lloyd appears) and "Superbabies: Baby Geniuses 2" will be surprised to know that "The Ransom of Red Chief" is a Hallmark production. To his credit, Bob Clark has also directed a holiday classic "A Christmas Story" based on Jean Shepherd's works, so Hallmark's decision is not without good reason.

"The Ransom of Red Chief" tries hard to be funny and touching at the same time. Maybe too hard. It becomes neither, lacking the characters you relate to, or the original author's wit and surprise.

J. Ryan
4.0 out of 5 stars Fun Movie, but Maybe Not Politically Correct
Reviewed in the United States on 1 January 2018
Verified Purchase
For anyone that has read O. Henry's short story, The Ransom of Red Chief, this movie adaptation will be a bit of a disappointment. It's still a fairly decent movie. I would put it in the same category with B movies or maybe a Hallmark movie. The kids will probably like it, but younger adults will most likely take a pass. The Ransom of Red Chief was required reading, in the early 60's, when I was in grade school, but would probably be considered insensitive or politically incorrect by today's standards.
Read more
Report abuse
See all reviews
Get FREE delivery with Amazon Prime
Prime members enjoy FREE Delivery and exclusive access to movies, TV shows, music, Kindle e-books, Twitch Prime, and more.
> Get Started
Back to top
Get to Know Us
Make Money with Us
Let Us Help You
And don't forget:
© 1996-2020, Amazon.com, Inc. or its affiliates