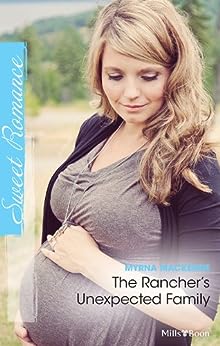 Myrna Mackenzie would have liked to be a princess but that job wasn't available. And since she loved stories and happy endings, becoming a romance writer was even better. An award-winning author, Myrna was born in Campbell, Missouri in the US, grew up outside Chicago and now divides her time between Chicago and Lake Geneva, Wisconsin. She adores the Internet, coffee, hiking, and "attempting" gardening. Readers can visit Myrna at her website: www.myrnamackenzie.com

Resan
3.0 out of 5 stars okay
Reviewed in the United States on 8 June 2019
Verified Purchase
While it had a lot of promise, which was kept up in large tracts , it does not hold well together.

The best way I can put it is that I shall not be looking for another story by this author .

Kindle Customer
4.0 out of 5 stars Wow
Reviewed in the United States on 12 July 2017
Verified Purchase
A really good read,one that I enjoyed thoroughly.A whole lot of laughter and fun.One of those comfortable and cozy reads.
Read more
Report abuse

Stella H. Fuller
5.0 out of 5 stars great writer
Reviewed in the United States on 8 January 2017
Verified Purchase
I have enjoyed all the Larkville Legacy
Read more
Report abuse

paula legate
4.0 out of 5 stars Sweet story
Reviewed in the United States on 21 March 2013
Verified Purchase
I loved this book. Kathryn was determined to do something good. She wanted a medical clinic for the small town. She had to go though Holt, and he was one head strong man. What Holt didn't know at first was Kathryn could be just as head strong, and she was not giving up. Kathryn stayed very independent though out the story. This story left me with a smile, it was very sweet, and I loved all the charactors!

Sample from chapter 2
I'll give you a reply tomorrow. If they were going to work together, he was going to call the shots. He wasn't going to risk a repeat of Lilith. "I see." She didn't, of course, but he had to give her credit for being a good sport about the whole thing. "this isn't a joke," She said quietly. She was right. "No ma'am, it isn't. I'll be in touch. Real soon. That's a promise." And for some reason he couldn't fathom, he held out his hand. It was, possibly, the dumbest thing he'd done in a long time. Kathryn placed her hand in his and he closed his big palm around her much smaller one. As her skin slid against his, he was more aware of her as a woman than he'd been when he was undressing other women. Quickly, she pulled away. Good idea. Not like this business of him and Kathryn working together, he thought after she'd gone. That had a bad idea written all over it. Unfortunately, he was already in. Now all he had to do was tell her. For real this time. Maybe he'd be lucky and she would decide he was a crazy man and find someone else to ask favors for her. But he knew that was a long shot. Kathryn was determined to get her clinic, even if she had to put up with a man like him to get it. Still, He bet it would be a long time before she would let him shake her hand again. That was a shame. And a blessing. At least one of them was thinking straight. It sure wasn't him.
Read more
Report abuse

Kindle Customer
5.0 out of 5 stars great read
Reviewed in the United States on 21 November 2012
Verified Purchase
I really loved this book, it was exciting and you never knew what was coming next. I love reading about cowboys, so it was fun!
Read more
Report abuse
See all reviews
Back to top
Get to Know Us
Make Money with Us
Let Us Help You
And don't forget:
© 1996-2021, Amazon.com, Inc. or its affiliates