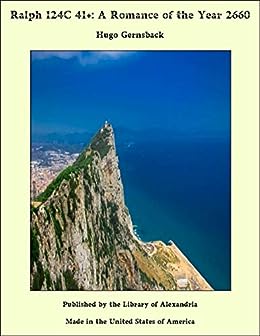 By the year 2660, science has transformed and conquered the world, rescuing humanity from itself. Spectacular inventions from the farthest reaches of space and deep beneath the earth are available to meet every need, providing antidotes to individual troubles and social ills. Inventors are highly prized and respected, and they are jealously protected and lavishly cared for by world governments. That support and acclaim, however -- as the most brilliant of scientists, Ralph 124C 41+, discovers -- is not without its price.

This visionary novel of the twenty-seventh century was written by Hugo Gernsback (1887-1964), founder of the influential magazine Amazing Stories. Marvelously prophetic and creative, Ralph 124C 41+ celebrates technological advances and entrances readers with an exuberant, unforgettable vision of what our world might become. This commemorative edition makes this landmark tale widely available for the first time in decades and features the prized Frank R. Paul illustrations from the rare first edition, a list of inventions and technological devices, and Hugo Gernsback's prefaces to the first and second editions. --This text refers to an alternate kindle_edition edition.

Jack Williamson is the author of numerous classic novels, including The Humanoids and Three from the Legion. He was recently inducted into the Science Fiction and Fantasy Hall of Fame. --This text refers to an alternate kindle_edition edition.
Read more

Amazon Customer
4.0 out of 5 stars Remote surgery visioned in 1950's SF classic
Reviewed in the United Kingdom on 4 March 2003
Verified Purchase
I first read this book as a 15 year old and the memory of it has been a vivid beacon in the hisory of my SF reading. This is a story set in 2660 in which the climax of the book is a successful act of complicated surgery undertaken by a robot controlled remotely by a surgeon many thousands of miles from the scene. The surgeon is battling to save the life of his beloved, only he has the skills to do so and remote control surgery is the only way he can be there in time to perform the op. A clever blend of SF and romantic fiction but well worth reading, because the technology is within sight - we'll see it before 2060, let alone 2660. Enjoy
Read more
One person found this helpful
Report abuse

Sebastian Stüber
4.0 out of 5 stars A Classic
Reviewed in Germany on 21 July 2016
Verified Purchase
Interesting mainly due to the time of its creation (1920s), the plot is okay, but includes lot of nerd fun. E.g. devices that empty out the ether leading to total darkness, and anti-gravitation as electromagnetic phenomenon. Truly a commemorative edition.
Read more
Report abuse

wiredweird
4.0 out of 5 stars Technological optimism off the leash
Reviewed in the United States on 31 August 2007
Verified Purchase
Hugo Gernsback (SF's "Hugo" awards are named for him) wrote this in 1911, so a big part of its value comes from campy quaintness. Set in the year 2660, everything is grander and more glorious than what we poor slobs of centuries 20-21 could possibly imagine - something that Ralph points out with remarkable frequency. The story itself has lagged the times, a formulaic romance of accidents, kidnappings, and heroic saves.

Many parts of this hundred-year-old story are decidedly dated, not least the references to the "ether" that carries light waves. Some just look silly to a modern eye, including the broadcast power distribution (sort of like a live-in microwave oven), electric roller skates, or restaurant that serves only liquid food, pumped through pipes to patrons turned off by the idea of chewing. And the daily disinfections, killing off all bacteria in the body, look positively pernicious, now that we know more about the importance of our symbiotic microbes.

A few points are strikingly prescient, though. Cable video might have been the obvious next thing, once telephonic voice transmission was common. Gernsback went even farther and predicted "video walls" tiled from many smaller video panels, and even channel surfing, albeit with patch-cord panels rather than typed URLs.

Read this if you want a quaintly futuristic, doubly-anacronistic romp, a shallow space opera, or an interesting artifact from the start of the last century. If you're looking for light, contemporary fiction, look onward. This is probably best for the hard-core SF fan or for the historian of technology trying to understand the social context of the time. The right reader will find a lot to enjoy, but it's not for everyone.

Ju Joh
4.0 out of 5 stars A so-so work of literature, but a very historical one.
Reviewed in the United States on 9 January 2007
Verified Purchase
If you were to take away the historical context of this book, and treat it as a pure piece of science fiction, it would be a poor purchase, two stars at best. Plot seems contrived at times, and overly romantic. (Perhaps because the book wasn't actually a book but orginally published as many installments of magazine story.) There are phrases that read awkward, whether due to the age or lack of focus on literature I don't know. Having said that, I still give it four-stars, and there is a reason why science fiction achievement award is named after Hugo Gernsback.

It is a must read for serious fans of science fiction. But for casual readers, you'd be glad modern SF is leaps and bounds more interesting. (Then again, who knows what people will say a hundred years from now about Star Wars?)
Read more
6 people found this helpful
Report abuse
See all reviews
Back to top
Get to Know Us
Make Money with Us
Let Us Help You
And don't forget:
© 1996-2021, Amazon.com, Inc. or its affiliates