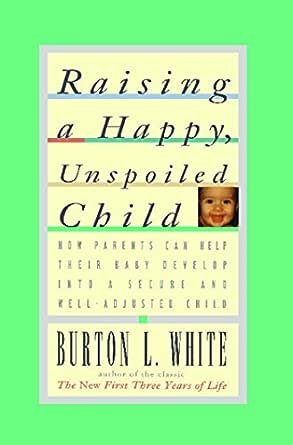 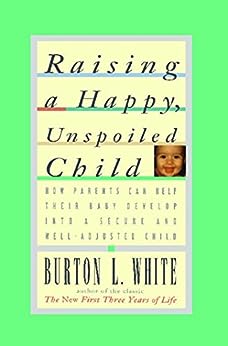 Raising a Happy, Unspoiled Child: How Parents Can Help Their Baby Develop into a Secure and Well-adjusted Child Kindle Edition

BURTON L. WHITE is the director of the Center for Parent Education in Newton, Massachusetts, and the designer of the Missouri New Parents as Teachers Project. The father of four (now grown) children, he lives in Waban, Massachusetts. --This text refers to an alternate kindle_edition edition.

Anete
5.0 out of 5 stars Good book.
Reviewed in the United Kingdom on 19 October 2019
Verified Purchase
Goes along with my first three years book. About how to establish basic in your small child. At the start of her life. Very important. Recommend
Read more
Report abuse

EHan
3.0 out of 5 stars Ok, but made me feel like a failure sometimes
Reviewed in the United States on 31 October 2013
Verified Purchase
I like the approach the author uses, by which I mean it is important to remember that children are a product of their environment, and we as parents can play into and encourage bad behavior if we aren't careful. What IS NOT particularly helpful is the practical steps given (as mentioned in other reviews).

I began reading this book when my daughter was a newborn, and for the most part I was able to set limits with her for the first 12 months or so of her life. After she turned one, however, she began to have tantrums - from what I understand about child development, this isn't unusual, though a little early, perhaps. This book basically says that if you did your job right, by this time, your work will be easy. Tantrums will be brief. Testing will continue until about age 2, but if you've been able to set limits, your child will not demonstrate negative attention seeking behavior as often and they will not be as demanding.

I will say that I think I did a pretty good job of setting firm limits with my daughter up to this point, but guess what? She has tantrums, and they don't just blow over, they actually carry on for 10 minutes sometimes, over something like taking away a dust bunny she was just about to eat. His suggestions of "restraining" never worked all that well for my daughter, though I tried, and sometimes it worked. I will try his next suggestion which is to remove access from a parent until the fit has calmed down by putting up a baby gate, but I have to be honest. Most of what he says about tantrums makes me feel like I've already screwed up my child beyond repair. I just do not believe that. I think that tantrums are a common and normal part of development. I think there are ways to deals with them that teaches limits and actually corrects the behavior. Not much helpful advice was given, just warnings about doing your parenting job well, and limiting access to the parent when in the midst of a tantrum.

So...overall, I think this book is worth reading, but I think another book would be better for practical advice on what to actually try when your child is in the midst of a tantrum - or other testing behavior.

Rosebud
5.0 out of 5 stars I raised my child using Burton White's methods
Reviewed in the United States on 22 February 2006
Verified Purchase
Many other reviewers complain that Burton White doesn't give enough practical "to dos' in his books. The style of giving information and allowing parents to figure how to best apply it to their situation is empowering and recognizes there is not a "one size fits all" approach. The parent still has to think and learn how to develop his or her parenting skills.

I first heard of Burton White through a friend who had a 10 year old who was terrific. I asked her what she did and she recommended "The First Three Years of Life". Using the tools taught by the book we encouraged our daughter to develop in a whole way - socially, intellectually and her curiosity.

Now, looking back, I can see that putting the theories into practice indeed helped her to develop well, and continues to show as she successfully navigates college and adulthood.
Read more
4 people found this helpful
Report abuse

M. Shearer
4.0 out of 5 stars Positive attention, gentle discipline, TERRIFIC TWO'S!!!
Reviewed in the United States on 13 February 2006
Verified Purchase
I first became aquainted with Burton L. White through his book, The First Three Years of Life. White's knowledge and insights on infants is outstanding and I loved the book so much that I went looking for more. I began reading Raising a Happy, Unspoiled Child when my child was six months old.

At about eight months, I began putting White's theories into practice during diapering. White feels that all babies go through a stage where they don't want to be held still long enough to be diapered. When I read this I thought, this won't be a problem for us, but soon enough it was. I followed White's advice, and in a very short time my daughter stopped protesting and accepted being diapered and it never again was a problem.

I've watched friends (who didn't read the book) with children of the same age literaly chase their children around the house trying to catch them in order to be diapered for many months!! Or in other cases try to diaper a kicking, screeming twenty-five-pound eighteen-month old. If you don't get anything else out of this book, his theories on diapering are a real life saver.

White's theories of positive attention really work. I have never spanked my child (White does not condone physical discipline) and have followed his advice on positive attention and gentle discipline. My daughter is now a terrific two-year-old and is an absolute joy to be around.

Playmates of my daughter with parents who are heavy-handed diciplinarians now have two-year-olds who cosnistently throw fits, kick, scream and bully, and constantly have to be put in time outs. Honestly, these kids are not much fun to be around!

Don't get me wrong, my daugter does ocassionally test her boundries (I'd be worrid if she didn't!), but she's doesn't whine or through fits when she's told no. I completely credit White for this and would recommend this book to anyone who wants to turn the terrible two's into terrific two's!!!

Others feel that this book gives little practical advice. I disagree. The book is broken into sections by age groups and his theories build from the beginning. I can see where if you don't start at the begining, you might not get as much out of it. Even if your baby is a bit older, I recommend starting at the beginning and working your way to where you want to be in order to fully understand White's methods and theories.

My two-year-old and I are able to enjoy each other and are both much happier because of Raising a Happy Unspoiled Child. Highly recommended!!!
Read more
11 people found this helpful
Report abuse

Wibbs
5.0 out of 5 stars Great book for expectant parents
Reviewed in the United States on 16 January 2007
Verified Purchase
This is an outstanding book that should be read by both expectant parents. It discusses not to raise a child that is how an A student, great athlete, or future world leader, but rather how to raise a student who does well in school, life, and society.

Mr. White interviewed parents from different cultures and child rearing methods and gives the reader straight advise on methods to improve your child's chances for success in their life ahead. I highly recommend this book to anyone who is ready to have their first and also as a re-read to those working on their second, third, etc. A definite must!
Read more
Report abuse
See all reviews
Back to top
Get to Know Us
Make Money with Us
Let Us Help You
And don't forget:
© 1996-2021, Amazon.com, Inc. or its affiliates