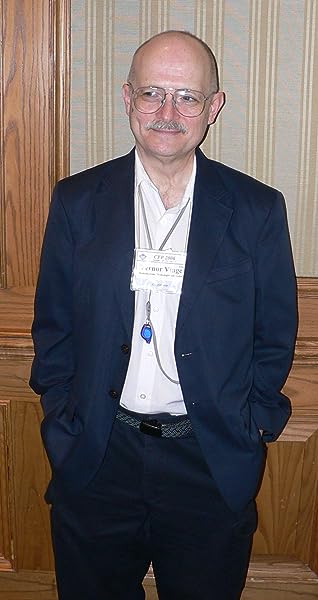 by Vernor Vinge (Author)
4.0 out of 5 stars 176 ratings
See all formats and editions
Sorry, there was a problem loading this page. Try again.
Read more Read less
Previous page
Next page

" "A Deepness in the Sky" more than justifies the old tag 'eagerly anticipated.' It's a space opera dealing with the age-old themes of exploration, first contact, different cultures, exploitation and, inevitably, conflict. An intriguing and mind-stretching epic. Highly recommended."
--"SFX"

" When I was young and had to write my address in a school notebook, I would begin with my street and apartment number and then go on through city, county, state, country and continent in a litany of ever more grandiose place names that did not end until I reached ' Earth, Solar System, Milky Way Galaxy, The Universe.' In those days, it thrilled me that my small corner of the Bronx was just a one part of the vastness I could see in the sky at night. This is the feeling I got from reading "A Fire Upon the Deep" by Vernor Vinge."
--Gerald Jonas, "New York"" Times Book Review"

" "Marooned in Realtime "is a cracking good story that leaves the reader with plenty to think about. Vernor Vinge draws fine characters and writes a compelling plot. In the end, almost all the mysteries are solved-- the only loose ends are those which will leave you pondering the future of Mankind and of the earth for weeks after you finish the book"
--"The ""Baltimore"" Sun"

Vernor Vinge is the author of such acclaimed novels as True Names , The Peace War, Marooned in Realtime, A Fire Upon the Deep, A Deepness in the Sky, and has won four Hugo Awards. A mathematician and computer scientist, he lives in San Diego, California.
Start reading Rainbows End on your Kindle in under a minute.

4.0 out of 5 stars
4 out of 5
176 global ratings
How are ratings calculated?
To calculate the overall star rating and percentage breakdown by star, we don’t use a simple average. Instead, our system considers things like how recent a review is and if the reviewer bought the item on Amazon. It also analyses reviews to verify trustworthiness.

Vic
5.0 out of 5 stars Rainbows End
Reviewed in the United Kingdom on 1 February 2014
Verified Purchase
In summary, it's a rich world you can really sink your teeth into with solid character arcs, a sensible if somewhat grandiose plot and it tied off quite nicely at the end.

I'd never read Vernor Vinge prior to getting this book so I wasn't sure what to expect but the near-future high-tech world it's set in is fascinating. I loved the idea of the wearable tech projecting an augmented reality straight onto your eyeballs, and little machines providing haptics to make that 'augmented reality' all the more real. That being said the world is not without its holes to pick if you search for them and if you're not familiar with computers you might see a word or concept which is unfamiliar but none of that is vital to the story.

Robert starts out as a pretty loathsome character, but I enjoyed exploring the world with him and thought overall he had a fairly solid character arc. All in all, the story is tight and it comes together well.
Read more
Report abuse

FlameBoy
4.0 out of 5 stars A fun read...
Reviewed in the United Kingdom on 15 December 2009
Verified Purchase
Much as I have loved Vinge's epics of the past, covering vast swathes of time and/or space, I still enjoyed Rainbows End, a novel set in a credible near future that feels like it might be just around the corner.

Vinge builds his world on current concepts, developing them far enough to be interesting, yet remain credible. This sets a grounded stage upon which he tells a story that's really about how there's always a gap between how different generations relate to the technology of the time.

The only thing that annoyed me about the novel is that two of the main characters, a father and son, were called Bob and Robert. It took a while for me to get used to which one was which, but maybe that's just me.

Amazon Customer
4.0 out of 5 stars Fantastic Read
Reviewed in the United Kingdom on 25 December 2018
Verified Purchase
It’s amazing how current and forward-thinking this book is. The future it imagines with Haptics and wearable technology, all inter-woven with a compelling plot made it a great read. Fabulous sci-fi writing!
Read more
Report abuse

J. Sweetman
2.0 out of 5 stars Pretty much the end for me ...
Reviewed in the United Kingdom on 21 June 2015
Verified Purchase
This is the sort of trying to be clever book in the post-hippie era and it didn't work for me at all. Maybe you could see it as a dip into the history of science fiction but even there I think it is a bit marginal.
Read more
Report abuse
See all reviews
Back to top
Get to Know Us
Make Money with Us
Let Us Help You
And don't forget:
© 1996-2021, Amazon.com, Inc. or its affiliates