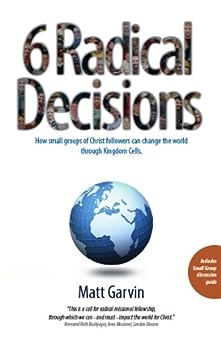 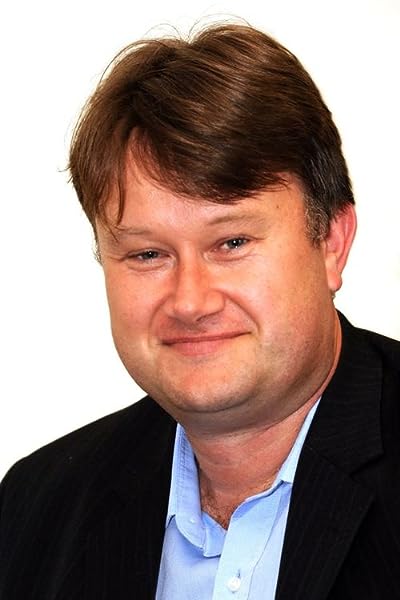 by Matt Garvin (Author) Format: Kindle Edition
See all formats and editions
Sorry, there was a problem loading this page. Try again.
6 Radical Decisions is a book that will challenge the way you think and live the Christian faith.


Here is what Christian leaders are saying about 6 Radical Decisions:

“This is an awesome book describing a movement that will save the church from institutionalism and the world from an aloof and out of touch Christianity. The foundational emphases of Kingdom Cells result in a refocus on Christ, a transformed life and a Spirit empowered multiplication of mission teams that truly love one another. I would recommend we read this book and walk it out!”
Dr. Joel C. Hunter
Senior Pastor, Northland – A Church Distributed Orlando, Florida, USA

“Matt Garvin calls us beyond the rhetoric of Christian theology to a radical commitment and missional obedience. These pages disclose a rare thoughtfulness in holding together a passion to see people come to faith and community transformation. A must read for fellow sojourners looking for ‘a city with foundations, whose architect and builder is God.’”
Rev Moss Ntlha
General Secretary, The Evangelical Alliance of South Africa

“Matt Garvin has produced a challenging and very useful book. He has unerringly aimed at the core of Christian discipleship and effective mission and pointed a way to their renewal. If we could once more harness the power of ‘Kingdom Cells’ Christians would find themselves as a cutting edge movement again.”
The Rev. Peter Corney OAM
Vicar emeritus St. Hilary’s Anglican Church Kew, Melbourne, Australia
Founding director of the Australian Arrow Leadership Program

“6 Radical Decisions is a powerful, biblically rooted manifesto for changing the world. This simple picture of communities of people loving Christ and loving the world is beautifully illustrated with examples from church history and experiences from the Fusion movement. Garvin’s infectious passion for authentic transformation spills onto the pages and is coupled with practical challenge. I will be re-reading this book with fellow dreamers and schemers, that we might see the Kingdom of God come in our locality!”
Andy Frost
Director of Share Jesus International

“In a deeply personal and passionate way, Matt draws together a wealth of distilled wisdom from the world’s finest Christian leaders. This is a call for radical missional fellowship, through which we can – and must – impact the world for Christ.”
Reverend Ruth Bushyager
Anglican Church, London

“We all need to hear it again fresh … you know, the clarion call. Pick up the thesaurus, thumb through, ah yes, there it is: ‘Clarion call’: 1. a direct public request for people to take action. Matt Garvin has enabled me to hear the call again, and issued with it direct request for action. This is not for the passive, but for those who are itching to live-out something radical and rich. It’s a call to live a lifestyle of faith with Christ and others, messy and entwined yet potent. May we hear the clarion call together and start planning!”
Tania Bright
Deputy Director for Research and Development, The Salvation Army

“Matt Garvin has had an amazing journey for a young man and he has depth and vision beyond his years. His passion for every neighbourhood to have a living, loving, freedom-filled, wise action Cell of Jesus followers to serve it, will grip you. His focus on spheres will be as divine guidance for many who are passionate to see change in society but, as yet, do not know how to be involved. His advocation of the legitimization of sodalities (action-focussed communities) will transform pew-sitters who have been certain there is something more, but have been afraid to step out.”
Tom Hallas
Field Director, Asia & Pacific, Youth with a Mission.

“6 Radical Decisions lays out a vision that can be lived out. It joins the dots of aspiration and engagement and puts a spring in the step of the Church.”
Rich Wilson
National Team Leader, Fusion U.K.
Read more
Previous page
Next page

As the son of the founder of the Evangelical Christian mission movement, Fusion, Matt Garvin grew up amongst people who had given their lives for the sake of the Gospel.

Matt began work himself with Fusion in 1992 after completing a broadcast journalism cadetship in the Australian outback city of Broken Hill. In his time with Fusion, Matt has led Fusion's work in Tasmania and Victoria and lived in 5 different intentional Christian communities. He has also served in Fusion's international leadership and had a long involvement in radio broadcasting in Australia. Matt is married to Leeanne and they have four children: Madeline, Joshua, Daniel and Sophie.

Matt and his family recently moved to Canada where Matt is studying a Masters in Theological Studies as well as supporting mission development around the world.

You can read more about his latest book at www.kingdomcells.org