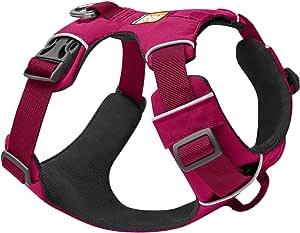 Brand: RUFFWEAR
4.6 out of 5 stars 11,043 ratings
Secure transaction
Returns Policy
Your transaction is secure
We work hard to protect your security and privacy. Our payment security system encrypts your information during transmission. We don’t share your credit card details with third-party sellers, and we don’t sell your information to others. Learn more
Available from these sellers.

The Front Range Harness is a padded everyday harness that is easy to put on and comfortable for dogs to wear. The harness features 2 leash attachment points: an aluminum V-ring centered on the dog's back for everyday walks, and reinforced webbing at the dog's chest that's good for redirecting dogs that pull. The Front Range features 4 points of adjustment, reflective trim, an ID pocket, and a light loop for the Beacon safety light (sold separately). It's available in a variety of colors that coordinate with the Front Range Collar and Leash (sold separately). Washing Instructions: Secure fasteners, hand wash with mild detergent, and air dry.

4.6 out of 5 stars
4.6 out of 5
11,043 global ratings
How are ratings calculated?
To calculate the overall star rating and percentage breakdown by star, we don’t use a simple average. Instead, our system considers things like how recent a review is and if the reviewer bought the item on Amazon. It also analyses reviews to verify trustworthiness.

Zoe
2.0 out of 5 stars Great fit, cool design but broken clasp and poor communication
Reviewed in Australia on 26 August 2019
Verified Purchase
Great fit and wonderful design! Within a week however the clasp broke on the back, I wonder if this is a faulty item as I have used this product previously and never has an issue. What is even more disappointing is that I e-mailed the seller to advise them of this issue and never even got a reply....
Read more
Helpful
Report abuse

James
5.0 out of 5 stars High quality harness & fast delivery
Reviewed in Australia on 19 January 2019
Verified Purchase
My two beagles love their new harnesses! Fitting guide was spot on.
Delivery was faster than estimated which was a pleasant surprise
Read more
Helpful
Report abuse

Bluesey
5.0 out of 5 stars Great item
Reviewed in Australia on 25 August 2019
Verified Purchase
Easy to use, took some time to adjust, but works.
Read more
Helpful
Report abuse
See all reviews

Amazon Customer
5.0 out of 5 stars It works!!!
Reviewed in the United Kingdom on 14 May 2020
Colour: Hibiscus PinkSize: X-SmallVerified Purchase
So, my Husband wishes he'd bought this as a gift for my birthday next month as I was raving about it so much 😅 but, I feel that it is becoming increasingly rare to find something whereby the thought, attention to detail, functionality and desire to fulfil a need make you so happy with a purchase. My beautiful dog, Nasa, is a Spanish rescue dog. She is nature's own forever puppy with the face & build of perhaps a small labrador puppy, but the body (& speed) of a small whippet. So, in the 2.5 years we have had her we have tried collars and various harnesses and as we are an outdoor active family & she is a fearless investigator of everything in nature, her harness gets a workout! So we get through them. The only ones which would fit, were fairly thin & so didn't last long & also meant that she could wriggle free from them if she chose to, which only happened twice with two different harnesses but was concerning as she is just like me... Free willed 😂 and so... This harness is a total game changer!! First of all like a mother who puts those little hairbands in her baby daughter's non existent hair because she gets mistaken for a boy... I love this hot pink design so Nasa isn't mistaken for a boy...no idea why this matters to me, perhaps flashbacks to my own pigeon holed youth as a "Tomboy" ha ha. Next, you can adjust and adjust, not just around her armpits (?) where she is stocky but her teeny shoulders & neck. No more houdini for her!!! Then... The added amazing bonus that you can walk or run her with the lead on top or in front. No more pulling, which she would do out of occasional impatience when we walk, because she knows we sometimes run so she just feels we are clearly able so why not? Anyway, when she'd pull out of the blue you had to be prepared so walking was a little more High alert than it should be. Now, without any extra training, she just trots happily along since the option to pull is not available, it is almost a relief to her.... A bit like when you want a sugar fix and you're glad you don't buy that stuff because you'd eat the lot! Someone put time and effort into knowing dogs and so I can't recommend this harness enough.
Read more
24 people found this helpful
Report abuse

C_Wxm
5.0 out of 5 stars A great harness for labs and can take a lot of punishment.
Reviewed in the United Kingdom on 20 August 2018
Verified Purchase
This is the third harness of this type that I have bought and will continue to stay with this make until they ever stop selling. Despite our labrador putting the harness through it's paces by many dips in the river, through bushes and when she pulls on the lead, it took two years before this harness started to shows signs of needing replacing and this was just some stitching coming loose near on the underneath.

We use this harness with the halti lead. So the lead is connected via the metal loop on her back and via the material and plastic loop on her chest. It has also showed no signs of ever rubbing her or being uncomfortable for her.

I'd recommend this harness to anyone.
Read more
31 people found this helpful
Report abuse

Steph
5.0 out of 5 stars Perfect harness
Reviewed in the United Kingdom on 8 April 2018
Verified Purchase
We have just tested this harness in Wales on treks and in the car with our Jack Russell and I am very pleased with it. It is very well made,light and has some nice safety features.She also doesn't slip out of it like previous harnesses I had. It is very adjustable and didn't limit her movements on her walk.I wish I had invested earlier.
Read more

5.0 out of 5 stars Perfect harness
Reviewed in the United Kingdom on 8 April 2018
We have just tested this harness in Wales on treks and in the car with our Jack Russell and I am very pleased with it. It is very well made,light and has some nice safety features.She also doesn't slip out of it like previous harnesses I had. It is very adjustable and didn't limit her movements on her walk.I wish I had invested earlier.
Images in this review

NICK
5.0 out of 5 stars Excellent harness
Reviewed in the United Kingdom on 12 October 2017
Verified Purchase
This is an excellent harness. After only a few outings our dog really forgot she was wearing it. It's really nice and padded and seems to be very comfortable. The front ring is brilliant for training her and because the ring is on the harness and not on her collar, if she does pull she doesn't hurt her neck. Also if she pulls, she is twisted sideways so is now pulling less which is better for everyone. This style of harness was recommended by an RSPCA trainer, who is helping us understand what our rescue dog needs. It's very adjustable and comfortable.
Read more
36 people found this helpful
Report abuse

70 people found this helpful
Report abuse
Translate review to English
See all reviews
Get FREE delivery with Amazon Prime
Prime members enjoy FREE Delivery and exclusive access to movies, TV shows, music, Kindle e-books, Twitch Prime, and more.
> Get Started
Back to top
Get to Know Us
Make Money with Us
Let Us Help You
And don't forget:
© 1996-2020, Amazon.com, Inc. or its affiliates