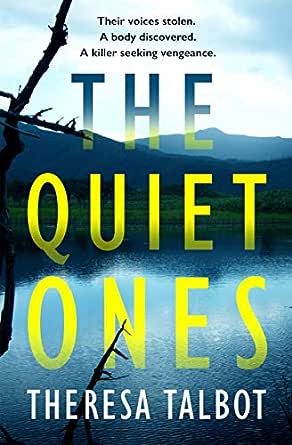 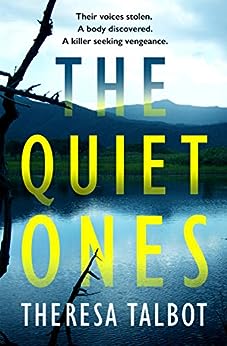 Stina
TOP 100 REVIEWER
3.0 out of 5 stars Emotional, Compelling and Heartbreaking in parts
Reviewed in Australia on 24 September 2019
THE QUIET ONES is the third book to feature the Glasgow-based investigative journalist Oonagh O'Neil, although it is just my second. I must have missed Book #2 along the way somewhere...lol I wasn't disappointed though I do recall the first "The Lost Children" being the best so far.

It begins with the apparent suicide of ex-football coach turned businessman Harry Nugent, although we are privy to his death in the prologue which is anything but a suicide. But what we do not know is who is pulling the strings orchestrating his death?

Harry is found by his wife hanging from the balcony banister inside their affluent home. Everything points to a suicide until they discover his tongue has been cut out and thrust into his mouth. That, and the bruising to his wrists and ankles indicating he'd been tied up, told them that this was anything but a suicide.

An investigation lead by DI Alec Davies and DS Jim McVeigh begins and it isn't long before they uncover some nasty little rumours circulating about the illustrious former football coach. It seems Harry Nugent's business ventures covered up a much deeper, darker and even more sordid secret. And it seemed, since his death people appeared to distance themselves from someone who has supposedly been exalted among the football fraternity. But no one was talking to the police.

Enter Oonagh O'Neil. The one woman investigative journalist who seemed to go where no man can. She gains the trust of her interviewees, of those victimised and abused at the hands of Nugent and his merry men - or their loved ones. She is empathetic and sensitive but pulls no punches.

Then two more bodies are found. One with his ears lopped off, the other with his eyes gouged out - both with them shoved into their mouths. The parallel to the three wise monkeys is not lost on Oonagh. See no evil, hear no evil, speak no evil. But the question is - is it a threat? At first thought it bore some resemblance to a gangland murder, but Oonagh knows it is more than that.

When Oonagh's investigations take her to Breakmire, an abandoned former psychiatric hospital, she is left wondering why here? What drew Nugent to this hospital? It's where he met his wife Sarah, a former nurse - but what else? Oonagh knows there has to be more. And when she finds just how far and how deep this story goes, she is both shocked and saddened for the victims...and sickened and enraged by Nugent and his depravity.

The story primarily unfolds through Oonagh's eyes, with the occasional POV of DI Alec Davies for a police perspective. There are a handful of chapters from 1983 by a Tommy Gallagher and, while these were heartbreaking to watch unfold, I felt they really didn't fit neatly into the story. What purpose did Tommy's chapters have except to tell his story in part? He had nothing to do with the end result, so I found it a little pointless. Hannah's story would have been a better one to weave into the narrative.

A discrepancy I found was the timeframe which didn't seem to match up with regards to Tommy after Alec came across him one evening. Then in the next chapter he was recalling the assistance he gave Tommy by getting him into a hostel and how he'd been tossed out after found flouting their "no drinking" policy. Alec recalled that that had been 3 weeks ago, and yet in the next chapter it went on to say that "it has been two weeks since harry Nugent's murder and they still had no real leads etc." But Tommy appeared well into Nugent's murder investigation so how could it have been three weeks since he was turfed out of the hostel that Alec organised for him when Nugent had only been dead for two. It just didn't tally.

And then there is the overt use of some phrases, which just seemed too cliched to be used so often. "As wide as the Clyde" is one that springs to mind, which was reference a number of times. There were a few others that I can't recall now, but which I did find a little repetitive whilst reading.

But on the whole, THE QUIET ONES is still a good read. I found it a little slow and convoluted at first but it soon gained momentum with those short snappy chapters I love so much!

THE QUIET ONES is a difficult story to read in part, though it is not graphic, the subject matter is horrifying. However, Theresa Talbot writing has shown both sensitivity and compassion in portraying this story that, I understand, has been at the forefront of Scottish news recently. It is heartbreaking and harrowing to think of what those poor boys went through all on a promise of greater things at the hands of those they trusted. The cruel and casual disregard for not just mankind, but children, while it is difficult to read, is all the more so being a fictionalised reality. Theresa noted at the end of the book in an AUTHOR'S NOTE her conversation with a taxi driver and his own experience at the hands of men like Nugent and how it inspired this story.

A solid addition to the Oonagh O'Neil series, THE QUIET ONES is still a compelling read which I have no hesitation in recommending to fans of this genre.

I would like to thank #TheresaTalbot, #NetGalley and #AriaFiction for an ARC of #TheQuietOnes in exchange for an honest review.

Tricia Law
5.0 out of 5 stars *** RIVETING ***
Reviewed in the United Kingdom on 18 September 2019
Verified Purchase
I started this book on Sunday and finished it on Tuesday! Working two days in between.
Oonagh yet again gets her teeth into an investigation that unravels like knitting. A Scottish football coach is found hanging in his home in an apparent suicide! Oonagh starts an investigation and she is shocked at the revelations. The subject matter is hard to take but the author gets her point across with taste and respect. Set in Glasgow is a bonus as it's familiar to me. If you haven't encountered Oonagh before then I am jealous because you have three great books to read. Can't wait for the next one.
Read more
One person found this helpful
Report abuse

B.Lees
5.0 out of 5 stars Superbly crafted writing, set in Glasgow
Reviewed in the United Kingdom on 14 September 2019
Verified Purchase
I had this pre-ordered, and started it yesterday. I quite literally could not put it down. The nature of the crimes involved isn't at all pleasant, but the beautifully crafted novel makes it bearable. I love the way the story develops, and the relationships too. Theresa Talbot can really write WELL. The setting in Glasgow is utterly authentic, as are the main characters. What some people suffered was horrific, but be warned - Oonagh and the rats will make you squirm. Oh and how I loved the Epilogue...
Read more
Report abuse

stuart falconer
5.0 out of 5 stars 5⭐️because I can’t give it 6⭐️
Reviewed in the United Kingdom on 21 October 2019
Verified Purchase
After tackling the tainted blood scandal in her previous novel, Keep Her Silent, Theresa Talbot proves again that it is possible to tackle current, controversial issues with a style of writing that is sensitive to the issue, makes you think about them and consider your attitude to them as well as keeping you gripped in a brilliant storyline.
The central character, Oonagh O’Neil, is a complicated but totally believable character. The others who we already know from ‘Keep Her Silent’ and ‘The Lost Children’ are developed further with a few newbies thrown into the mix.
The storyline twists, turns,takes you down roads that you never expected and just when you think you’ve got it figured out it, twists and turns again.
I can’t recommend this book (and it’s two predecessors) highly enough. I read it in double quick time (for me!) but once I’d read the epilogue and all the lightbulbs came on I wanted to read it again straight away.
Sincerely hoping that book 4 in the series will be along at some point because the development of the characters has reached a fascinating stage and Theresa Talbot’s writing is a pure joy to be immersed in.
Read more
Report abuse

Vonnie
5.0 out of 5 stars Settle down for a great read!
Reviewed in the United Kingdom on 13 October 2019
Verified Purchase
This is a new author and The Quiet Ones is the third in a trilogy of TV journalist Oonagh O’Neil. Brilliant read. Full of suspense, tension and unpredictable twists. Like her earlier books, it also stands alone so you can read her books in any order. One of my fav authors. Theresa Talbot’s books deliver big time!
Read more
Report abuse

Jacqui
5.0 out of 5 stars 3rd 'Oonagh ONeill' book by Theresa, great read
Reviewed in the United Kingdom on 3 September 2020
Verified Purchase
I enjoyed this 3rd 'Oonagh O'Neill' book. Did think the Sarah story was superfluous as brought in extra characters. I like that these books are set in Glasgow & the links with the two previous books. A few typos on kindle version.
Read more
Report abuse
See all reviews
Get FREE delivery with Amazon Prime
Prime members enjoy FREE Delivery and exclusive access to movies, TV shows, music, Kindle e-books, Twitch Prime, and more.
> Get Started
Back to top
Get to Know Us
Make Money with Us
Let Us Help You
And don't forget:
© 1996-2020, Amazon.com, Inc. or its affiliates