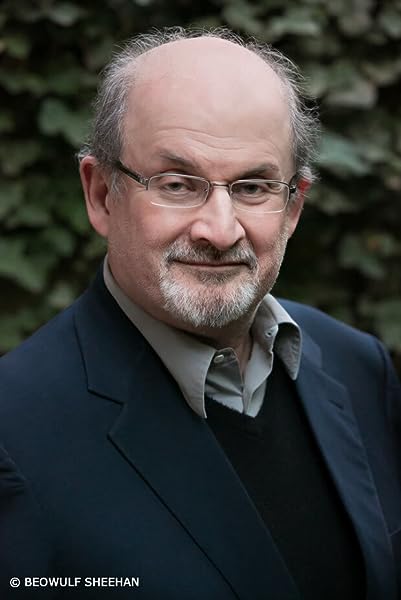 by Salman Rushdie (Author)
4.2 out of 5 stars 942 ratings
See all formats and editions
Sorry, there was a problem loading this page. Try again.

Page 1 of 1 Start overPage 1 of 1
Previous page
Next page
Start reading Quichotte on your Kindle in under a minute.

4.2 out of 5 stars
4.2 out of 5
942 global ratings
How are ratings calculated?
To calculate the overall star rating and percentage breakdown by star, we don’t use a simple average. Instead, our system considers things like how recent a review is and if the reviewer bought the item on Amazon. It also analyses reviews to verify trustworthiness.

Y Altamimi
5.0 out of 5 stars Brilliant
Reviewed in Australia on 16 November 2019
Verified Purchase
This is my first read to Salman Rushdie, I knew of his style and substance. This book is not the easiest to follow however I enjoyed as I prefer the "not easy books " the quest, the vallies, Sancho are all magical yet seemed real! The confusion between the author, brother and sister, son ...etc with Quichotee and his story were absolutely thrilling.
One part I didn't like was the end and the little people who came out from a little hole. .it was a turn off.
I highly recommend this book and appreciate thoughts exchange.
Happy reading
Yas

Becassine6
2.0 out of 5 stars I love Rushdie's books but not this one
Reviewed in Australia on 2 February 2021
Verified Purchase
Some of my favourite contemporary fiction was written by SD. However this is was over the top self indulgence and I could not finish it. Pity.
Read more
Helpful
Report abuse

vivnoname
5.0 out of 5 stars Engrossing
Reviewed in Australia on 31 January 2020
Verified Purchase
It was a little hard to get into, but eventually I was hooked. I really enjoyed the 2 different storyline’s and am left wanting more.
Read more
Helpful
Report abuse

keith
5.0 out of 5 stars Brilliant
Reviewed in Australia on 26 December 2019
Verified Purchase
In the early stages I didn’t think I was going to like this novel, but as one enters the world of the novel within the novel it becomes a very funny and interesting journey.
Read more
Helpful
Report abuse

Johnjohn
5.0 out of 5 stars Wonderful satire
Reviewed in Australia on 13 March 2020
Verified Purchase
I had to keep reading just for the sheer brilliance of Rushdie writing, and the scope of his imagination. It is also very funny and as sharp as a razor. He captures the insanity of our 21st century perfectly.
Read more
Helpful
Report abuse

Timothy McKinnon
3.0 out of 5 stars Verbose self indulgence.
Reviewed in Australia on 10 May 2020
Verified Purchase
He never uses three words when he can use fifty. So he makes reading an unnecessarily difficult task. Interesting take on Cervantes but he drowns his writing in verbosity.
Read more
Helpful
Report abuse

Avia S.
5.0 out of 5 stars Classic Rushdie
Reviewed in Australia on 18 October 2020
Verified Purchase
I absolutely loved this, classic Rushdie which transports you to a fantastical world, always tying back to Bombay. The creativity is inspiring, mesmerizing and perfect escapism.
Read more
Helpful
Report abuse

Y D Basserabie
2.0 out of 5 stars a bit all over the place
Reviewed in Australia on 27 August 2021
Verified Purchase
hard to know what this novel was really about as it spread itself over so many topics and narratives... a bit of a mish mash really
Read more
Helpful
Report abuse
See all reviews

P. G. Harris
5.0 out of 5 stars A huge literary entertainment
Reviewed in the United Kingdom on 17 October 2019
Verified Purchase
This is probably the novel one might expect from an aging, highly educated, literary novelist of asian sub-continental extraction with a penchant for magical realism, living in America in the era of Trump, climate change and global extinction.

It contains both novel and meta novel. The core story clearly has its origins in Cervantes, as Rushdie tells the story of an expatriate indian, Quichotte, living in America as he embarks on a journey across the continent with his imaginary son in search of his beloved, who has the self referential name of Salma R. The tale doesn't, however, restrict itself to Don Quixote, referencing everything from Ionesco to Disney's Pinocchio.

As Quichotte travels, his story is entwined with that of the author writing him. Through this device Rushdie explores the autobiographical elements of the writers craft as aspects of his real life (and one suspects also Rushdie's own) are reflected in his hero's struggles. Indeed Rushdie himself occasionally appears in the novel's shadows.

This meta level perhaps gives the book a slightly problematic note. In the story of Quichotte, the author makes extensive use of metaphor and magical realism. In the story of the author, Rushdie explains the meaning of such symbolism in pretty clumsy terms.

The real strength of the book is its enormous breadth and depth. It is book which is absolutely crammed with ideas. It is a book which probably needs to be held shut with heavy duty elastic bands to prevent the contents from escaping. The physical and emotional journeys of Quichotte and the Author enable them to explore aging, death, grieving, filial estrangement, parental abuse, parental love, climate change, the expatriate experience, the asian experience in post 911 America, celebrity culture, increasing political xenophobia, the silicon valley culture, and on and on and on.

The exploration of racism is handled cleverly. Quichotte and Sancho experience a form of stereotypical redneck xenophobia, being driven out of successive towns, accused of being Islamic terrorists. When a similar thing happens to the Author and son, there is a more hopeful picture of the hatred being more isolated, with the general public being more decent. This seems to be a call to pay less attention to sensationalism, and more to the essential decency of ordinary people.

At the heart of it all, it helps that Rushdie is a beautiful writer, and this book is peppered with sentences so stunningly well constructed that I felt myself stopped in my tracks, smiling at the audacity.

That audacity stretches to genre busting. I have often thought of magical realism as the literary cousin of fantasy and even sci-fi. Here Rushdie joyfully tramples over any such artificial distinction and gleefully mixes an exploration of the author's relationship with his creation with a a Sci Fi story akin to Baxter and Pratchett's Long Earth books. (Although Rushdie himself credits Arthur C Clarke.)

Another possible criticism is one that might be applied to Rushdie's entire body of work, that this is all just too clever for its own good, but after a short consideration I decided that I don't care, this is just such a huge, ambitious, intelligent entertainment that I lost myself in the sheer enjoyment of reading it.

Quichotte is a unique book in every sense of the word. It's a modern take on Don Quixote, a novel-within-a novel where the main plot and the subplots, the main characters and the secondary ones intersect and reflect each other in an endless cycle of similarities.

The text is dense and took me a rather long time to sort everything together, but the reading experience as a whole is more than fulfilling and well worthwhile. I also loved all the pop culture references and even the rather fantastical elements outstretching reality.

This is a thought provoking look on modern day American from the lens of an ordinary observant. Highly recommended.

Thanks Netgalley, Random House, and author Salman Rushdie for a chance to review this epic of a book.
Read more
6 people found this helpful
Report abuse

Allegro
3.0 out of 5 stars Great prose, little else
Reviewed in the United Kingdom on 5 December 2019
Verified Purchase
Brilliant prose from genius writer. Pity he hasn’t got a good story line to suit his talent. This seems contrived and very “clever” but leaves me cold for its supreme irrelevance. Having said that I admittedly came on to this after Vasily Grossman’s “Life and Fate”, which is truly life changing. The insignificance of Quichotte in comparison left me cold. Unfair perhaps but Rushdie is much too good to waste his talent on this sort of work. Nonetheless his prose, powers of description and range of knowledge of modern day idiosyncrasies is pretty impressive. Wish he would get his teeth into something more chewey.
Read more
2 people found this helpful
Report abuse

Janet McC
2.0 out of 5 stars Disappointed
Reviewed in the United Kingdom on 20 May 2020
Verified Purchase
I have always respected and carefully read Mr. Rushdie's books, but confess that this disappointed me. It was too densely-written, no space to breathe or think, as if he was in a rush to cram the pages with as much information as possible. Too many lists, too much random 'stuff'. I suppose I have fallen in love with pared-down, economical literary fiction. My apologies.
Read more
2 people found this helpful
Report abuse

Daniel
5.0 out of 5 stars How did this get nominated?!
Reviewed in the United Kingdom on 1 January 2020
Verified Purchase
Possible the worst book I've ever read. But it arrived in one piece and on time...it went downhill after that! We read it as a book club universally agree it's time we would never get back!
Read more
2 people found this helpful
Report abuse
See all reviews
Back to top
Get to Know Us
Make Money with Us
Let Us Help You
And don't forget:
© 1996-2021, Amazon.com, Inc. or its affiliates