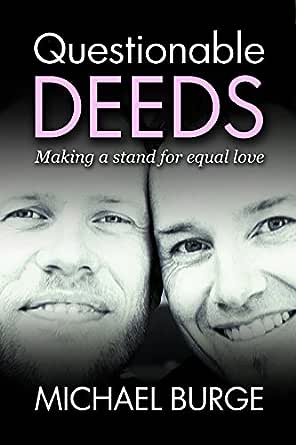 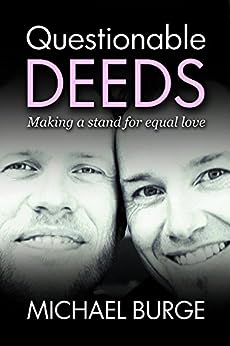 "A tough but ultimately triumphant and deeply satisfying read. It touches on themes of grief, denial and injustice. The ending is uplifting." - Mary Moody --This text refers to the paperback edition.

Michael Burge is an Australian writer and journalist who was born at Inverell in the New England region of NSW. He grew up in the Blue Mountains, lived in England for most of the 1990s, and now resides on Coochiemudlo Island in Queensland's Moreton Bay with his husband and their two dogs. --This text refers to the paperback edition.

Dan Seed
5.0 out of 5 stars Absolutely incredible
Reviewed in Australia on 30 September 2015
Without a doubt, one of the best books I have read this year. Burge highlights the very real effects of inconsistently legislated LGBT rights.

This is bigger than his grief... This is a reason for a social movement to swell.

PatsyT
4.0 out of 5 stars Raw, uncompromising and gripping
Reviewed in the United Kingdom on 9 October 2015
Verified Purchase
To lose a spouse is one of the worst things that can happen to anyone. For it to happen suddenly, and for no apparent reason, at the age of forty-four, is even worse. Compounding all this, if that spouse is the same sex as you are and you happen to be living in Australia you face a long, bleak road ahead.

This is the essence of Michael Burge's autobiographical account of losing his partner and then having to go through a plethora of legal and emotional hoops before being even being allowed access to the death certificate, or any kind of recognition of his relationship by his family. It is a raw account, to say the least, he holds nothing back about his appalling experiences, how he almost lost the will to live, friends who helped and those who didn't, his coping strategies. Sometimes I lost track of who was who but it was all quite clear in the end. For anyone with an interest in gay relationships, or with experience of having lost a partner, this is a must-read. An important book, especially in light of the fact that Australia is now the only 'western' country in the world that does not (yet) recognise same-sex marriage.
Read more
Report abuse

Nepenthese
5.0 out of 5 stars An emotionally difficult read, but a book that needs to be read.
Reviewed in the United States on 16 September 2015
Verified Purchase
If you have ever questioned the importance of marriage equality, the necessity to recognise the relationships of same-sex couples, you need to read this book.

If you have ever wondered why so many people are standing up and asking, demanding, that marriage equality is recognised in Australia, you need to read this book.

If you want to know what happens when a family tries to erase their son’s life partner from legal documents, denies their relationship, and even their son’s sexuality, you need to read this book.

This book is an emotionally difficult read. Michael’s writing is raw, blunt, and honest; sometimes shockingly and gut-wrenchingly so. Reading of Jono’s death and how Michael tried to navigate the following weeks will have you reaching for tissues. After that, be prepared to be angry and appalled by the behaviours of not just Jono’s family, as they try to erase Michael from Jono’s life and his death, but also the attitudes and behaviours of people who professed to be friends of Michael. And yes, there is also friendship, of the truest kind. Friends and family who quietly and actively gave Michael the love and support he needed to stay on his feet – even when he no longer wanted to.

There is honesty in this book. Honesty wrapped in the truth, the lies, the grief, the slow journey to acceptance, and the finding of a new life, love, and home.

This is not a work of fiction. This is Michael’s life. This is a telling of what happened in the weeks, months and years after his husband died, and the legal and emotional battles he fought for acknowledgement of the validity of their relationship.

This is not an isolated incident, and this is not Michael’s story alone. This happens to same-sex couples, too often and too frequently. Same-sex partners are disenfranchised by families at times of grief, illness, loss, and the families are supported in their actions by the legal system.

Some things have changed in the years since Jono’s death and Michael’s subsequent fight for recognition. There are some legal rights for same-sex couples. But, there will always be in-equalities in the legal standing of same-sex couples until marriage equality is recognised in Australia.
Read more
Report abuse

diana taylor
5.0 out of 5 stars Why gay marriage?
Reviewed in the United States on 16 October 2015
Verified Purchase
A brave and incedibly honest book. A true story A convincing case for gay marriage and the incredible difficulties incurred without this bit of paper when a partner dies. An insite into a personal grief process made more difficult by burocracy. An inspiring story as the author works though grief to come out the other end
Read more
Report abuse

Paul Cooper
3.0 out of 5 stars Good read just thought the story would have more meat ...
Reviewed in the United States on 13 November 2015
Verified Purchase
Good read just thought the story would have more meat to it. Started out really well, but at times felt like a life story of the author and not the "questionable deeds" that I thought it would be about. By life story I meant a lot of things that each and every one of us do and not specific to the situation Michael found himself in that many of us can't relate to - like walking dogs, or moving house. My interest wained after the first 1/3 of the book.
Read more
Report abuse
See all reviews
Get FREE delivery with Amazon Prime
Prime members enjoy FREE Delivery and exclusive access to movies, TV shows, music, Kindle e-books, Twitch Prime, and more.
> Get Started
Back to top
Get to Know Us
Make Money with Us
Let Us Help You
And don't forget:
© 1996-2020, Amazon.com, Inc. or its affiliates