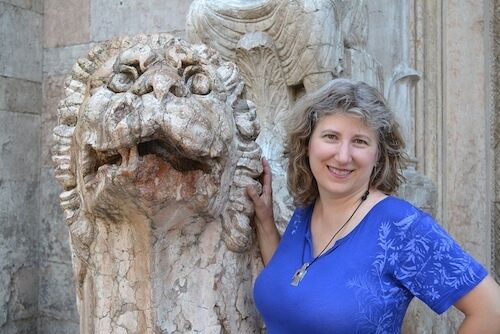 by Linda C. McCabe (Author)
4.7 out of 5 stars 8 ratings
See all formats and editions
Sorry, there was a problem loading this page. Try again.

"McCabe paints a vivid portrait of Medieval France whose vestiges can still be found in the streets of modern Paris." Cara Black, New York Times bestselling author of the Aimée Leduc mystery series

"Classic in its theme of young, idealistic lovers from opposing camps, it sheds a bright light on the culture, history and legends of a time and place too little explored by most western readers." Persia Woolley, author of the internationally acclaimed Guinevere Trilogy

"A grand and engaging re-telling of the original 'star crossed lovers' epic with everything Orlando - chivalry, romance, fights to the death, hippogriffs, madness, and beauty! As engaging a story as I have read this year, I couldn't put it down and I urge you to pick it up today." John Granger, author of Unlocking Harry Potter

Linda C. McCabe lives in the Northern California Wine Country with her college sweetheart and twenty-something son. She received a master's degree as an historian of science from Sonoma State University, and loves to travel. To aid in the research of her writing, she has taken two extended trips to France scouring museums in Paris and trekking through medieval hilltop villages in the Midi-Pyrenees. Her novel Quest of the Warrior Maiden won the 2013 Bay Area Independent Publishers Association Award for Best Historic Fantasy. McCabe has been a member of the California Writers Club for more than a decade and is a past-president of her local branch, Redwood Writers and received the Jack London Service Award. She has had opinion/editorials published in the Santa Rosa Press Democrat, the Los Angeles Times and essays published in several of the Redwood Writers Vintage Voices anthologies as well as the Centennial Edition of the California Writers Club Anthology "West Winds." McCabe was also the winner of the now defunct website Portkey.org's First Reader's Choice Award for Best Novel Length Fic for Harry Potter fan fiction in 2003 for her story "Secrets, Lies and the Daily Prophet."
Start reading Quest of the Warrior Maiden on your Kindle in under a minute.

Ravenplus
4.0 out of 5 stars Four stars deservedly
Reviewed in the United Kingdom on 20 February 2013
Verified Purchase
I approached this book with some trepidation, worried a book I loved had been ruined. However I,m glad I persevered : this is a really inventive retelling of an old classic and the revisions work and the author keeps the ironic tone. Also enjoyed her development of the women characters. My one niggle was not bringing in Angelica and reducing her too a heartless tart, but that is just me. I really cannot praise this book enough, role on part 2.
Read more
One person found this helpful
Report abuse

Ashley Woodland
4.0 out of 5 stars and sweet romance will adore this tale
Reviewed in the United States on 18 May 2016
Verified Purchase
Lovers of epic magic, adventure, and sweet romance will adore this tale. Every time I thought I knew what would happen, Linda C. McCabe pulled the story rug out from under me making this an unpredictable but wonderful ride. I loved how she naturally mixed this world with the magical one in such a believable way. I enjoyed the innocent love between the admirable warriors, Brandamanete and Ruggiero.

Brandamente reminds me a bit of Brienne of Tarth from Game of Thrones. Fearless, with high morals, and superior fighting skills, Brandamante is a fine heroine. Still, she doesn't have everything she needs because her heart is after Ruggiero.

You don't have to know the historical background of the story to understand and enjoy it, but if you do like history then the way the author included bits of history will please you. Still, it is NOT history "heavy".

When I was a child I loved fairy tales, and if you do too, I recommend this read.
Read more
2 people found this helpful
Report abuse

Malena
5.0 out of 5 stars Couldn't put it down
Reviewed in the United States on 20 July 2012
Verified Purchase
Usually when I read a book outside of my genre (mystery) I get bored after a point and wonder where the mystery is. This book had me from the start and I couldn't put it down. The characters, the adventure, the love story, it all comes together to make a great book. This is volume one of what I hope will be an epic series that Ms. McCabe continues writing for a long, long time.
Read more
3 people found this helpful
Report abuse

Joe-Free
5.0 out of 5 stars Great read, couldn't put it down.
Reviewed in the United States on 3 October 2011
Verified Purchase
I came across this through an unrelated search and bought it because I like mythology but was unfamiliar with this tale. Once it was on the kindle, neither my wife nor I could put it down. I can't find any other books by this author on Amazon but we will be watching. If you like historical fiction and/or mythology, you will love this book.
Read more
4 people found this helpful
Report abuse

Margaret Silvestri
5.0 out of 5 stars Great historical fantasy
Reviewed in the United States on 3 May 2013
Verified Purchase
This book is a wonderful blend of fantasy and history. It has a rich fantasy sword and sorcery quality mixed with historical people and references. Looking forward to the next book.
Read more
2 people found this helpful
Report abuse
See all reviews
Back to top
Get to Know Us
Make Money with Us
Let Us Help You
And don't forget:
© 1996-2021, Amazon.com, Inc. or its affiliates