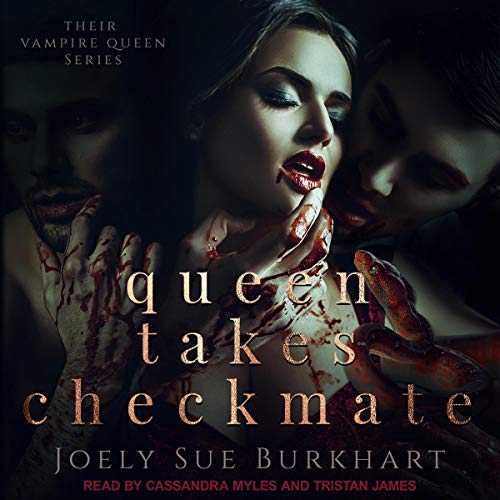 The god of light has met his match. But whose life will the red serpent claim?

Killing the queen of New York City has added a million new responsibilities to Shara Isador's list. The former queen's Blood must be dealt with before they turn thrall. The queens Keisha Skye coerced into sibling relationships must either be formally sworn to House Isador or freed. Though Shara can't in good conscience allow anyone into her house who took part in the rampant torture in which House Skye indulged.

While every single day, Shara feels the weight of the red serpent coiled around her throat. The goddess' gift grows heavier with every passing moment. If she doesn't act, the serpent will consume everything she loves. But if she goes after Ra as promised, someone she loves very much will die.

Any of her Blood will gladly pay that cost, but Shara loves them too much to even consider losing one of them.

Who will survive the epic showdown with Ra, the god of light, and will this be the end of Shara Isador's story?

Final days - Don't miss out!
Learn more about membership
By completing your purchase, you agree to Audible’s Conditions Of Use and Privacy Notice.
Sold and delivered by Audible, an Amazon company
Share

4.8 out of 5 stars
4.8 out of 5
173 global ratings
How are ratings calculated?
To calculate the overall star rating and percentage breakdown by star, we don’t use a simple average. Instead, our system considers things like how recent a review is and if the reviewer bought the item on Amazon. It also analyses reviews to verify trustworthiness.

Liash
TOP 50 REVIEWER
5.0 out of 5 stars Can't get enough of this series!!
Reviewed in Australia on 8 November 2018
Verified Purchase
This series continues to amaze and impress me! Not only do we have a unique take on vampires who have magic and shifting abilities themselves, but the intimate scenes are hot and flow beautifully with the storyline.

I love the alternating POVs, and how we get to know more about all of the characters in each book - they all continue to develop and grow, showing us new sides of themselves.

The storyline in this book focuses on Shara's battle with Ra, and what a showdown it is! With new players, Shara has to be careful with who she decides to trust. Her Blood keep close and turn extremely protective in an effort to keep her safe, and new dynamics arise in the group as well.

I honestly can't get enough of this series, and could happily read it over and over again. I'm definitely looking forward to the next book, and also to the chapters/novellas that will appear in the Between the Sheets and other anthologies.

loredana esposito
5.0 out of 5 stars Great Book!
Reviewed in Australia on 15 June 2019
Verified Purchase
Thanks for a great book! If you are looking for a steamy hot book with a little RH and good storyline to keep it going, then don't look any further this series is for you. It is a series that has a little of EVERYTHING which I didn't realize how much I love!
Read more
Helpful
Report abuse

Amazon Customer
5.0 out of 5 stars Another Great Read
Reviewed in Australia on 14 September 2018
Verified Purchase
Joely Sue Burkhart has certainly done it again. Once more she has woven such a wonderful tale around Shara and her blood. Really looking forward to more adventures/loves with Shara. Joely Sue Burkhart is truly an amazing author. Love her to bits. I strongly recommend any of her books.....they are all brilliant
Read more
Helpful
Report abuse

Jules B
TOP 1000 REVIEWER
5.0 out of 5 stars Give me more!
Reviewed in Australia on 13 December 2018
Verified Purchase
I am devastated that i have reached the end of this series. I can't believe it. Even after it was tied up, I am desperate for more.
This series was unlike anything I have ever read. I devoured it and hunger for more.
I hope Burkhart writes more in this world, I will be reading all her work from now on.
Read more
One person found this helpful
Helpful
Report abuse

A. J. Bergman
TOP 1000 REVIEWER
5.0 out of 5 stars Have to keep reading
Reviewed in Australia on 16 September 2018
Verified Purchase
Holy moly, as always, Joely absolutely slays and doubts you might have. All the feels. Loved the author note at the end.
Read more
Helpful
Report abuse

Keely Tenille
5.0 out of 5 stars This ruined me and I’m loving it
Reviewed in Australia on 10 September 2018
I finished this book a minute ago and I am ruined. Destroyed. My heart was ripped out and crushed.
There were tears, public yelling at my phone and I tore through this book like I my life depended on it.

I have so much love for Shara and her Blood and was thrilled to dive back into her world. This is a lot longer than previous books but fast paced in a good way. Character development and a couple of deliciously steamy scenes were a great reprieve from this monster plot.

I devoured the show down despite being in tears (that moment at 85% broke me) and was thrilled with the ending.

Kindle Customer
5.0 out of 5 stars Long live House Isador
Reviewed in Australia on 10 September 2018
Oh wow! What can I say... this book follows Sharas journey as she continues to fight her way through politics and drama while the ever present threat of Ra hangs over her head. She knows the final battle between her and Ra is coming and she has to do everything she can go prepare. While Keisha Skye is no longer a threat, Marnie Ceresa still lurks in the background. Also who from her precious blood will the red snake take as sacrifice?
Read more
One person found this helpful
Helpful
Report abuse
See all reviews

Anonymous1
5.0 out of 5 stars Shara F Isador kicks butt yet again! ❤
Reviewed in the United Kingdom on 12 September 2018
Verified Purchase
Sometimes you find a series that start out strong, but as the series continues some of the books feel like fillers while you're waiting for the final show down. This couldn't be further from the case with Joely's Their Vampire Queen series. Not only get each of the books get longer, they get stronger - both the characters and the plot.
Read more
Report abuse

Riva
5.0 out of 5 stars Amazing
Reviewed in the United Kingdom on 11 September 2018
Verified Purchase
I was in tears by the end! words cannot describe the magnificence of this series.

The characters are well developed, endearing with a completely unique story and lore.

Kindle Customer
5.0 out of 5 stars A queen x A god
Reviewed in the United Kingdom on 3 December 2021
Verified Purchase
I really enjoyed the different locations in this book and the fact there are more powerful females working with Shara, helping her accomplish what is needed.
Read more
Report abuse

Swann
5.0 out of 5 stars Love this book
Reviewed in the United Kingdom on 7 January 2019
Verified Purchase
I loved this book and the rest in the series so much. I wish I could buy it again and enjoy the epic adventure all over from the start. The characters were well written and the story gripped me from beginning to end.
Read more
Report abuse

Just Josie
4.0 out of 5 stars 4 “Because Shara Isador doesn’t mess around”- stars
Reviewed in Germany on 29 December 2019
Verified Purchase
There are so many interesting and mysteries things I love in this series.

The mythology.
The world-building.
The Blood.
The “hierarchy”.
The Power, and that’s just to name a few.
Plus the sex is HAWT.

It took a while to get truly captivated by the story, but the final 150 pages did the trick. I was thinking “3 stars” until the last pages, so it did help on my final rating.

It just such a creative and strangely complex story, and I simply love the fact that vampires can shapeshift.
That gods are the enemies. That light is not always good.
Found this story so refreshing in that aspect.
Read more
Report abuse
See all reviews
Back to top
Get to Know Us
Make Money with Us
Let Us Help You
And don't forget:
© 1996-2022, Amazon.com, Inc. or its affiliates