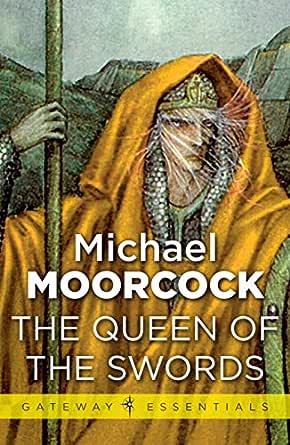 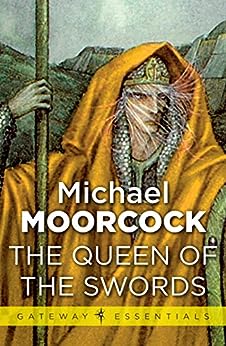 The Queen of the Swords (Gateway Essentials Book 2) Kindle Edition

The Second Book of Corum: the Prince in the Scarlet Robe.

Fresh from victory over the Chaos Lord, Arioch, Prince Corum must battle the forces of Xiombarg, the dreaded Queen of the Swords, whose armies are close to delivering control of five planes of existence to Chaos, the forces of Law all but defeated.

Corum and his allies enter the fray, though the odds are stacked against them. Their only hope lies in locating the advanced weaponry of the fabled City in the Pyramid. But the City is besieged by the forces of Chaos - and the Chaos Lords are now sworn enemies of the Prince in the Scarlet Robe...

abruzzo john
5.0 out of 5 stars excellent
23 December 2013 - Published on Amazon.com
Verified Purchase
brought back memories and still keeps you reading through the night,so in that sense better that you start first thing in the day
Read more

Michael Dea
2.0 out of 5 stars Paced too fast
3 March 2002 - Published on Amazon.com
This is the second book in Michael Moorcock's Chronicles of Corum series. The book continues the adventures of Prince Corum first begun in 'The Knight Of Swords'. In this book Prince Corum travels too a different plane to try and end the hegemony of The Queen of Swords, and thus save his own plane from the forces of Chaos. With him is the eternal companion of Champions,Jhary-a-conel and his winged cat.
I don't know if this story was originally written for a magazine format, but it certainly reads like it. This is probably the weakest of the swords trilogy, and like all three books in the sword trilogy, the pace is breakneck. One has no time to appreciate the dangers Corum finds himself in, before he is immediately rescued and moved on to the next predicament.

average
4.0 out of 5 stars Super Reader
30 August 2007 - Published on Amazon.com
Corum has gained himself a new moniker in this book, The Prince of the Silver Hand, thanks to a bit of an accident with one of his arms that required some mystical aid to restore an arm to usefulness.

He is moving up the ladder, and has to take on the Queen this time, to try and protect his own plane. The ever faithful Companion to Champions is with him, pet included.


Read more
Go to Amazon.com to see all 3 reviews 3.9 out of 5 stars
Get FREE delivery with Amazon Prime
Prime members enjoy FREE Delivery and exclusive access to movies, TV shows, music, Kindle e-books, Twitch Prime, and more.
> Get Started
Back to top
Get to Know Us
Make Money with Us
Let Us Help You
And don't forget:
© 1996-2020, Amazon.com, Inc. or its affiliates