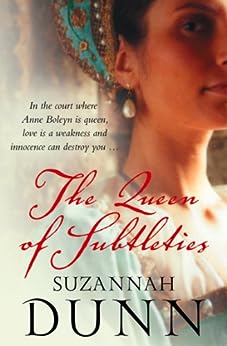 The Queen of Subtleties Kindle Edition

"A lively reminder of the perils of marrying kings and princes, however glam the bride."--Kirkus Reviews

"Dunn's Boleyn is lusty, willful, ambitious and ultimately likable."--Fort Worth Star-Telegram --This text refers to the paperback edition.

Suzannah Dunn is the author of ten novels in the United Kingdom, including The Sixth Wife and The Queen of Subtleties, both published in the United States as well. She lives in Brighton, England.

Roman Clodia
2.0 out of 5 stars I struggled to finish this
Reviewed in the United Kingdom on 8 May 2010
Verified Purchase
Having just read Dunn's  The Confession of Katherine Howard  which I loved, I decided to read this, her first 'historical' novel. Like other reviewers I struggled to finish it, but I think for slightly different reasons.

As others have said, Dunn experiments with a modern take on 'history', so she makes people talk in contemporary terms while retaining the thought world of their times. I thought that worked really well in her Katherine Howard book, but here the distance created is too great. The modernisms of having Anne Boleyn talk about her 'mum' and 'dad' and 'auntie Liz' (Elizabeth Howard!) is really grating and doesn't work.

I also disliked her version of Anne: Dunn makes her too bitchy, too politically-naive and stupid, when in actuality Anne seems to have been well-educated, morally-pius and intelligent to the point of being an intelllectual.

The second story of Lucy, the court confectioner, worked far better for me, and gave a taste of real lives at the Tudor court. Dunn can be an acute and observant writer, particularly good on the subtle manoeuvres of romantic relationships. There are signs of that here but they become subsumed under the more sensational Boleyn story.

So I found this an unsatisfying read but to her credit Dunn seems to have refined her technique enormously in later books.
Read more
6 people found this helpful
Report abuse

Sam Aaron
5.0 out of 5 stars Great book
Reviewed in the United Kingdom on 5 June 2015
Verified Purchase
Gives a unique insight to the mind of Anne Boleyn and an interesting point of view on one of the most infamous events in Tudor history
Read more
One person found this helpful
Report abuse

Lynne O’Donnnell
4.0 out of 5 stars Very good read
Reviewed in the United Kingdom on 27 May 2013
Verified Purchase
A bit complicated to follow in the beginning as it jumps about a bit, but gripping nonetheless. Very well written
Read more
Report abuse
See all reviews
Back to top
Get to Know Us
Make Money with Us
Let Us Help You
And don't forget:
© 1996-2021, Amazon.com, Inc. or its affiliates