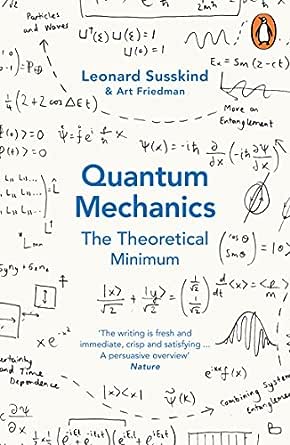 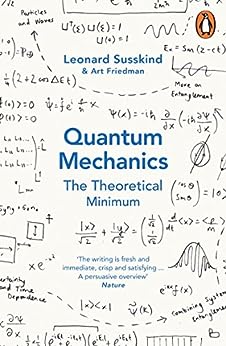 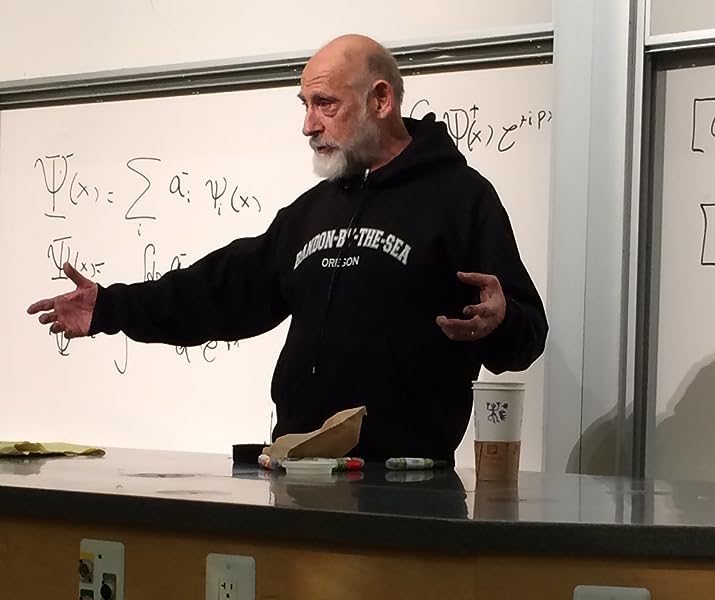 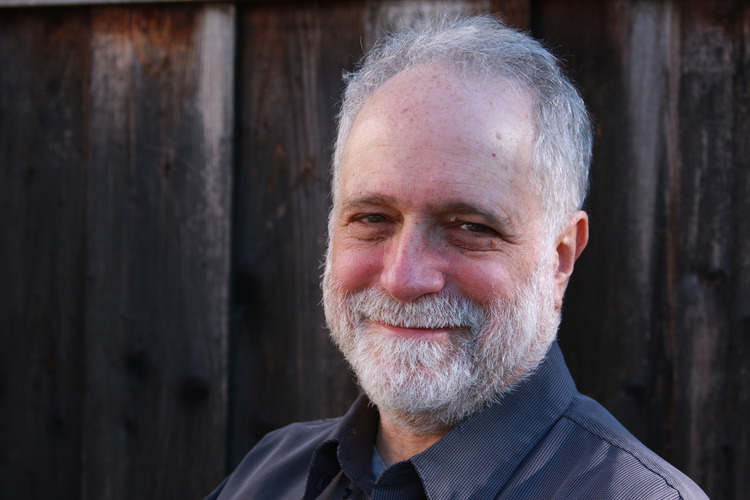 Leonard Susskind has been the Felix Bloch Professor in Theoretical Physics at Stanford University since 1978. He is the author (with George Hrabovsky) of The Theoretical Minimum, as well as The Black Hole War and The Cosmic Landscape. He lives in Palo Alto, California.Art Friedman is a data consultant who previously spent fifteen years at Hewlett-Packard as a software engineer. A lifelong student of physics, he lives in Mountain View, California. --This text refers to the paperback edition.

"If you want to know how physicists really think about the world, this book is the place to start."--Sean Carroll, author of The Particle at the End of the Universe

"If you're ever banished to a desert island and allowed to take just one book, here it is. Given enough time, with no distractions, you could use it to eventually master quantum mechanics."--Science News

"Susskind and Friedman's persuasive overview--and their insistence on explaining...exactly what it is that is strange about quantum mechanics--may be just what is needed."--Nature --This text refers to the paperback edition.

From the bestselling author of The Theoretical Minimum, a DIY introduction to the math and science of quantum mechanics. --This text refers to the paperback edition.
Read more

4.6 out of 5 stars
4.6 out of 5
804 global ratings
How are ratings calculated?
To calculate the overall star rating and percentage breakdown by star, we don’t use a simple average. Instead, our system considers things like how recent a review is and if the reviewer bought the item on Amazon. It also analyses reviews to verify trustworthiness.

Louis
5.0 out of 5 stars A must buy for aspiring and amateur physicists alike!
Reviewed in the United Kingdom on 15 July 2014
Verified Purchase
These series of books are by far my favourite science books. Ever. Having read the classical mechanics book, I was extremely excited when this was released. I would warn though that it is not for the light-hearted. The Theoretical Minimum books are filled completely with equations and if your mathematics isn't up to scratch you wont get past the second lecture.
Having said this, if you wan't to start understanding science; real science that is, not like the science of pop science books where you're told a few vague ideas and some rough history. Rather, this book takes you into the mathematical framework of quantum mechanics and allows you to do the calculations and discover the true beauty of the equations.
Before reading this book my background in mathematics and physics were as follows: GCSE and AS level maths and physics, had read the first book. I don't think you will struggle to read this provided that you're willing to work fairly hard at understanding what's going on and that you have a working knowledge of calculus and a basic knowledge of matrix operations and knowledge of complex numbers.
The book covers a variety of topics and by the end of it you will understand the basics of the Schrödinger equation, general uncertainty, the Heisenberg uncertainty principal, using quantum mechanics to calculate probabilities of certain outcomes and also quantum entanglement and why it's such a strange phenomena. These ideas are not made readily available, you will have to do a fair bit of work in understanding in order to fully appreciate these ideas.
It took me about 3 months to read and understand this book and I feel that I have a basic grasp on some fundamental ideas in quantum mechanics. If you have no serious understanding of the maths of physics or have no interest in learning it then this book is not for you. If you do not want to have to think about the ideas presented in order to grasp their importance then this book is also not for you. However if you want an invitation into the world of real quantum mechanical theory then this is the book for you.
Read more
77 people found this helpful
Report abuse

Andrew Ross
5.0 out of 5 stars The best introduction to the math, without blather about quantum weirdness
Reviewed in the United Kingdom on 8 July 2018
Verified Purchase
This book will appeal to people who, like me, have dabbled in many ways with quantum theory over the years and read many books on it but perhaps never before found anything so clear, authoritative, mathematically sound, and free of blather about how quantum theory defies what seems to pass for common sense along lay readers. The mathematical level will challenge readers lacking prior acquaintance with algebra, calculus, vectors and matrices, complex numbers, and classical mechanics, but this is after all the basic toolkit for anyone seeking to get a serious grip on what makes quantum mechanics tick. Apart from that, the humility that comes with advancing age and a wry sense of humor will suffice to carry you through this engaging little book.

Leonard Susskind obviously knows the theory as well as anyone, intimately, and has evidently taught it often enough to know exactly know to optimize his approach. He prepares the ground carefully and uses the qubits representing spin as his main running example, which lets him avoid murky issues around particles and waves for most of the discussion. He also works in Dirac algebra from the start, which is far and away the clearest approach for my money and provides a solid base to discuss the respective approaches and main results of Heisenberg and Schrödinger, when he gets that far. I found his treatment far more enlightening than that in volume 3 of the Feynman lectures, where Feynman made a mess of presenting Dirac algebra and failed to motivate either matrix mechanics or wave mechanics with sufficient mathematical or philosophical care.

Susskind has properly taken on board the depth of the foundation work needed to present quantum theory intelligibly, so as not to be shipwrecked on the rocks of the paradoxes that lead weaker heads to despair about ever making sense of their challenge to what used to pass for common sense about physical reality. His discussion of states and state vectors, basic principles, entanglement, uncertainty, nonlocality, dynamics and so on is always spot on, with a confident mathematical grip on the issues and a calm refusal to be ruffled by the difficulties they present to intuitive comprehension. His approach is ideally suited to showing how and where quantum logic defies classical logic, how far you can go before deep issues about spacetime need to be confronted, for example by going from discrete sums to continuous integrals, and how little you need to fuss about particle and waves before the new foundations are in place.

A modern introduction to quantum mechanics needs to go beyond Dirac's elegant but dated and difficult textbook, both in terms of approach to set things up for new work in quantum computation and high energy physics and in terms of content to touch on such topics as the Bell inequalities, the trials of Alice and Bob, and the creation and annihilation operators of quantum field theory. Susskind does all this with masterly cool, as well as a warm appreciation of the excitement in wait for people who go on to tackle those further topics. Art Friedman has made sure the text remains accessible to plodders like me, though perhaps some of his humorous additions might be trimmed or deleted in future editions of what seems to me to be a core text with a long and glorious potential afterlife.
Read more
13 people found this helpful
Report abuse

opalqnka
5.0 out of 5 stars Nice introduction to QM for 5th graders ( ͡° ͜ʖ ͡°)
Reviewed in the United Kingdom on 27 April 2016
Verified Purchase
I do recommend this book. The authors did a great job in explaining QM in an accessible manner in a lively language. It does contain some mathematical manipulations but nothing too striking. The book has some exercises inside but again, not hard or involving.
Overall, I'd recommend this book to a complete newcomer to quantum mechanics. If you have some experience with QM, I'd guess you can skip it safely.

Now, after this you'd have gathered nice grasp of QM. But this ain't enough - go into the applications such as Solid State Physics, Atomic Physics, Nuclear... Only when you've applied the machinery of QM you would "understand it". Not that anyone can.

Garrold
4.0 out of 5 stars Very good introduction to quantum mechanics in need of an edit
Reviewed in the United Kingdom on 1 May 2017
Verified Purchase
This book is wonderful in the way that it introduces the mathematics of quantum mechanics starting from the point of view of quantum computing, i.e. starting with the quantum bit (the qubit). The mathematics seems to flow naturally from the physics in this book. Leonard Susskind's online lectures are always excellent, including the Theoretical Minimum series. I should say that this book is well written introductory text (and assumes some basic mathematics, complex numbers and linear algebra), and is neither popular science nor a second course in quantum mechanics. But, as other reviewers have noted, the Kindle edition of this book curtails some equations at the end of the line, and the book in general has a number of minor technical errors. This book is in bad need of an edit, which does sometimes detract from following the text.
Read more
7 people found this helpful
Report abuse

Rahul Madhavan
5.0 out of 5 stars Recommended if you like mathematics
Reviewed in India on 22 December 2017
Verified Purchase
I've read quantum theory a few times from different authors with many perspectives. no where had it been better elucidated than by Susskind. Quantum being what it is, is not graspable to the human mind, as we have no experience dealing with quantum effects. So the author takes a different approach - through the mathematics - which is stunningly simplified. I could actually follow the math to a large extent, even if i couldn't work out out independently.
The nice part is that the author knows what is important - he actually takes many chapters just to explain what is meant by State in the quantum paradigm. This is stark contrast to many authors who work backwards from the most famous quantum results.

Overall highly recommend for an enthusiastic amateur. Wont help you crack your entrance exam but will help you understand the nature of reality (to the extent that quantum theory can describe it)!
Read more
32 people found this helpful
Report abuse
See all reviews
Get FREE delivery with Amazon Prime
Prime members enjoy FREE Delivery and exclusive access to movies, TV shows, music, Kindle e-books, Twitch Prime, and more.
> Get Started
Back to top
Get to Know Us
Make Money with Us
Let Us Help You
And don't forget:
© 1996-2020, Amazon.com, Inc. or its affiliates