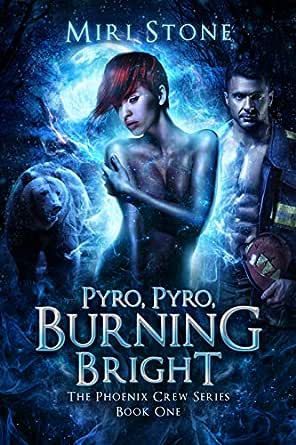 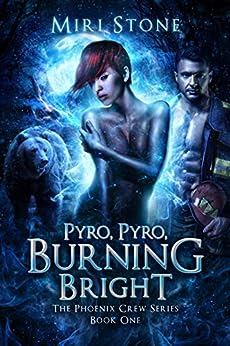 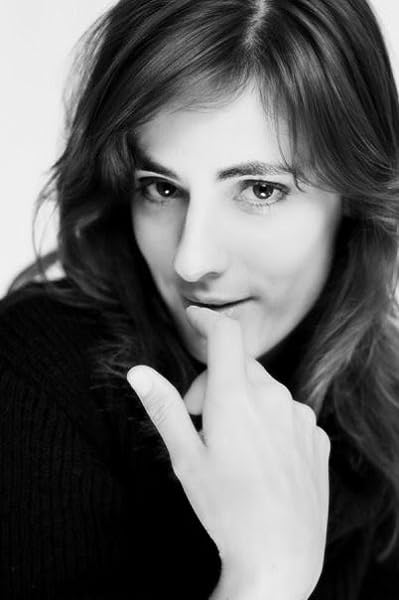 FROM THE ASHES, EVEN THE MONSTERS CAN BE REBORN.

Mackenzie wakes up, naked, in front of a burning apartment with amnesia and a voice in her head telling her to run. But when she takes refuge in a small mountain town, the fire beckons. The voice in her head has a disturbing psychic connection to the flames. And yet, she can’t seem to stay away from Ryan, the local Fire Chief and bear shifter alpha.

Too bad it’s a terrible idea to date a fireman when you’re harboring an inner pyro...

Ryan is on the hunt for the arsonist who’s stalking his town. Yet, he can’t get his mind off Mackenzie, the sassy new barista who pours lattes like a dream. When she keeps turning up at increasingly dangerous call-outs, he has to decide…

Is his mate the arsonist or merely a soul swept up in the flames?

Their sexual charge is through the roof. But their lives, and the lives of everyone they love, are set to combust if they don’t work out the true identity of the arsonist. Because he has a dark vendetta of his own. One that will not be denied.

This is a full length novel (133k words) and written for mature audiences (18+ only please!) It includes explicit sex scenes, frequent cussing, psychic magical powers and hot growly alpha males bumping up against sassy heroines who can hold their own.

Michelle
TOP 500 REVIEWER
5.0 out of 5 stars Great start for a debut author!
21 December 2019
Format: Kindle Edition
For a debut author, this was an extremely strong start...

I loved Mackenzie, her spunk and her strength, trying to constantly rebuild her life based on writings and drawings in a scrapbook and still managing to keep one step ahead of whoever was chasing her.

I normally prefer books with a proper backstory but I found that in this case, the lack of one, kept the mystery and intrigue going through out.

Ryan had a more straight forward story and this helped to balance the "fill in the blanks" nature of Mackenzie's past.

The change of POV was a bit difficult at first, simply because I wanted to see more of Mackenzie's journey but as the book went along, this became easier to handle. I felt I wanted to see the different perspectives.

Overall, this is a fun little rollercoaster with lots of twists and turns and I am looking forward to seeing what Miri Stone has in store for the Fire Mountain crew!

Sarah Williams
4.0 out of 5 stars Cool story.
14 December 2019
Format: Kindle Edition
I’m a little conflicted about this book. I think it was something about the ending. But I’m really keen to read the next one. I want to know more.
I loved the main character. She was interesting and the mystery of her kept me turning pages. I’ll be honest, I thought she was cool, (and weird, which I love). Her new baker best friend was gorgeous. I definitely want to read her story. All the firefighting shifters has me intrigued, but I think it was the ending with them that had me unsure. It makes me want to read more though.

So I’m about 3.5 stars. I’m definitely going to read the next, it feels like it’s just going to get better.

Ann Marie
5.0 out of 5 stars You can always find your way home.....
13 November 2019 - Published on Amazon.com
Format: Kindle EditionVerified Purchase
Mackenzie, her story grabbed me right away. Unsure why she was standing amongst ruins, disaster all around. Had she caused this? Was she to blame for all the destruction? I could not put this read down. Mackenzie’s story was so uniquely interesting, had I ever read a book about a fire starter? No.

Mackenzie is on the run from someone, who that someone is, we will discover a bit later. She winds up in Bear Falls Washington. A Small town, with Sara’s Bakery being the center of the world for these guys. Sara the baker and shop owner is a no nonsense type of woman. Not afraid to speak up, we meet her half brother Brodie, then we have Ryan, the twins and Nick all are members of the Fire Department, Ryan is the Chief of the Fire department. They are as close as family, they live together and they work together. A pack.

Sara takes Mackenzie into her home and her bakery, as well as her family. Mackenzie afraid to let anybody close for fear of hurting them. Oh how wrong she is about who and what she really truly is. Always thinking she was the monster, she was never the monster. She was the one who took out the monsters, the ones who took the weak for granted who used them and abused them. She was the one there protecting the innocents. She just didn’t know it. There is so much in this book, so much to tell you and I could honestly go on for a few more paragraphs …. You need to read this! Do you like shifter reads? Do you like reading about different types of shifters something a bit more than the usual shifter reads? Heart pounding, tablet gripping, hold your breath kinda of read?? This is it! Not kidding. It’s been a long time since I found paranormal read that did this to me. Go get it! Hell contact me and I’ll gift it to you. But you gotta read this!

K.O. Newman
5.0 out of 5 stars Read this NOW!
20 December 2019 - Published on Amazon.com
Format: Kindle EditionVerified Purchase
Pyro Pyro is probably one of the best books I've read this year. No, seriously. It held my attention from start to finish, and with the length of this novel, that's seriously impressive. I love Mac and her fierce struggles. I love her sarcasm and wit, and the heartbreaking realities that she faces. The Chief is a beautiful polarity of soft and hard, steadfast and moveable. Their relationship is organic, but also that flash bang that is typical in this genre.

When it comes to secondary characters, you can't help but fall in love with them. Even the most tragic and broken of the characters in this book become lovable in the way they are brought to life and nurtured.

This is truly an excellent start to what I can only imagine will be a truly epic series, and the first look into this world of shifters. I can't wait to see where this all goes.

If you haven't fallen in love with this book yet, I strongly urge you to get on with it. I promise you won't regret it.
Read more

Debra P.
5.0 out of 5 stars Fantastic Debut!
28 September 2019 - Published on Amazon.com
Format: Kindle EditionVerified Purchase
Wow, what a debut novel this was to read! I am beyond hooked on Miri Stone! Her writing is truly magnificent! If I could give her more than 5 stars I would.

When the story first started I was a little confused as to what was happening but I soon got lost in the way the tale was being told. It had a nice pace and it has hot shifters and a deep story within its pages! What Mac is, well let’s just say I have never read a book with that type of character before and I want more! Beautiful in all her glory, inside and out. She is confused about herself for a bit but the way things are discovered about her and those around her is well told and keeps you locked in the story.

It is a story filled with lots of action, love, heat (not just sexual in nature either) and a connection that truly is something you would wish to find for yourself. It has some tragedy within the characters that gets played out and not in a way you may expect. I love the twists and turns that I experienced while reading it.

The Lusty Literarians
5.0 out of 5 stars Incredible Debut Novel
1 October 2019 - Published on Amazon.com
Format: Kindle EditionVerified Purchase
I’m so glad I bypassed all the books in my TBR list and read this stunning debut by Miri Stone! I’ve read a few Phoenix stories before and this one was truly unique. Stone has a wonderful writing style and her storytelling is beautifully done. Mackenzie and Ryan were great MCs and I loved them together. All of the supporting characters were great as well. I liked how the story changed POVs throughout the book between multiple characters. That really helped you get a full perspective on what they were each thinking and doing. I can’t wait to read book 2 and look forward to following Miri’s progress as a writer. If her first novel is any indication, there is nothing but wonderful stories ahead. I endeavor to say that anytime she releases something new I will continue to put it at the very top of my TBR pile!
Read more

Nogah
5.0 out of 5 stars Must read!
21 October 2019 - Published on Amazon.com
Format: Kindle EditionVerified Purchase
You know how you see a cover that makes you all tingly cause it's just that gorgeous, and then read the blurb which makes you jump around in anticipation waiting for the book you just pre-ordered to finally be released?
That's how I felt about Pyro, Pyro, Burning Bright. Miri Stone not only delivered she did so with a punch to the gut.
I just finished reading PPBB and I feel like I am coming down from a crazy high.
You get suspense, fight scenes, friendship, love and oh-so-hot passion, pages upon pages of goosebumps from thrills, all with a healthy dose of magic and sexy shifters. Stone has created an amazing world full of growly bears and spitfire women with haunted pasts, a deep sense of mystery in every turn.
A real page-turner filled with heat (and not just from the fires) and though it is a paranormal novel, the human interactions are nothing if not genuine.
Amazing debut.
This should be on your TBR list today!
Read more

Go to Amazon.com to see all 41 reviews 4.8 out of 5 stars
Get FREE delivery with Amazon Prime
Prime members enjoy FREE Delivery and exclusive access to movies, TV shows, music, Kindle e-books, Twitch Prime, and more.
> Get Started
Back to top
Get to Know Us
Make Money with Us
Let Us Help You
And don't forget:
© 1996-2020, Amazon.com, Inc. or its affiliates