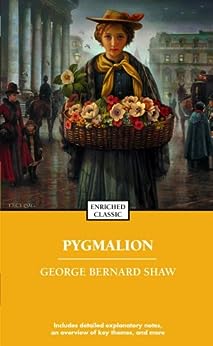 by George Bernard Shaw (Author) Format: Kindle Edition
See all formats and editions
Sorry, there was a problem loading this page. Try again.
When George Bernard Shaw wrote Pygmalion more than a half century ago, no one could have predicted his play would eventually be converted into one of the great musicals of our time -- My Fair Lady -- and an Academy Award³-winning motion picture. Generations of readers and theatergoers have found relevance in Shaw's story of speech therapist Henry Higgins, who successfully transforms Liza Doolittle, a "draggle-tailed guttersnipe," into a darling of high society who momentarily upsets his hard-edged reserve. The extraordinary wit of this master dramatist of the twentieth century cuts away at the artificiality of class distinctions to reveal that human clay can be molded into wondrous shapes.
Washington Square Press' Enriched Classics present the great works of world literature enhanced for the contemporary reader. This edition of Pygmalion includes the analysis of Eric Bentley from his book Bernard Shaw. Essential biographical and historical background is provided, together with notes, critical excerpts, and suggestions for further reading. A unique visual essay of period illustrations and photographs helps bring the play to life.
Read more
Previous page
Next page

Drama in four acts by Henrik Ibsen, published in 1890 and produced the following year. The work reveals Hedda Gabler as a selfish, cynical woman bored by her marriage to the scholar Jorgen Tesman. Her father's pair of pistols provide intermittent diversion, as do the attentions of the ne'er-do-well Judge Brack. When Thea Elvestad, a longtime acquaintance of Hedda's, reveals that she has left her husband for the writer Ejlert Lovborg, who once pursued Hedda, the latter becomes vengeful. Learning that Ejlert has forsworn liquor, Hedda first steers him to a rowdy gathering at Brack's and subsequently burns the reputedly brilliant manuscript that he loses there while drunk. Witnessing his desperation, she sends him one of the pistols and he shoots himself. Brack deduces Hedda's complicity and demands that she become his mistress in exchange for his silence about the matter. Instead, she ends her ennui with the remaining pistol. The work is remarkable for its nonjudgmental depiction of an immoral, destructive character, one of the most vividly realized women in dramatic literature. --The Merriam-Webster Encyclopedia of Literature --This text refers to an alternate kindle_edition edition.

Dublin-born George Bernard Shaw (1856-1950) was an active Socialist and a brilliant platform speaker. He was strongly critical of London theatre and closely associated with the intellectual revival of British drama. Dan H. Laurence has edited Shaw's COLLECTED LETTERS and COLLECTED PLAYS with their Prefaces. He was Literary Advisor to the Shaw Estate until his retirement in 1990. Nicholas Grene is Professor of English at the University of Dublin. --This text refers to an alternate kindle_edition edition.

'You see this creature with her kerbstone English: the English that will keep her in the gutter to the end of her days. Well, sir, in three months I could pass that girl off as a duchess at an ambassador's garden party. I could even get her a place as lady's maid or shop assistant, which requires better English.'

Following this public boast, Professor Henry Higgins accepts a challenge to teach the flower-seller Eliza Doolittle to speak standard English and launch her into polite society. Through Higgins's triumphant transformation of Eliza into a 'lady', and Eliza's subsequent rebellion against Higgins's attitudes and assumptions, Shaw's provocative comedy explores questions of speech and class in England.

First performed in London in 1914, 'Pygmalion' quickly established itself among the classic English comedies. On this lively recording, which offers the complete text of the definitive script of 1I39, the play is performed by a distinguished cast led by Sir Michael Redgrave, Sir Michael Hordern, Lynn Redgave and Donald Pleasence.

One of Shaw's most enduring works, Pygmalion is an insightful comedy of class relations and perceptions, as played out between a Cockney flower girl and the irascible speech professor who has taken her on as a pet project. Described by critics as "a play of great vitality and charm," Pygmalion inspired the award-winning stage and film productions of Lerner and Loewe's musical, My Fair Lady.

4.5 out of 5 stars
4.5 out of 5
1,124 global ratings
How are ratings calculated?
To calculate the overall star rating and percentage breakdown by star, we don’t use a simple average. Instead, our system considers things like how recent a review is and if the reviewer bought the item on Amazon. It also analyses reviews to verify trustworthiness.

Amy Gray
5.0 out of 5 stars Original story is always the best
Reviewed in Australia on 25 January 2019
Verified Purchase
This story has been re written so many times but the original is always the best.
Read more
Helpful
Report abuse

DianneA
3.0 out of 5 stars Pygmalion and MFL
Reviewed in Australia on 7 December 2016
Verified Purchase
I have loved and been instructed by the comparison of GBS's original and the text of My Fair Lady. I have also appreciated the discourse at the end.
Read more
Helpful
Report abuse
See all reviews

Seán
1.0 out of 5 stars This is a fake
Reviewed in the United Kingdom on 6 May 2020
Verified Purchase
This is not the text as written by Shaw but a fake that seems to have been back translated by a machine from a foreign language. Amazon should be ashamed of themselves for selling rubbish like this. Anybody who bought this in good faith should automatically be entitled to a refund.
Read more
4 people found this helpful
Report abuse

Kindle Customer
4.0 out of 5 stars Finally read it.
Reviewed in the United Kingdom on 7 May 2020
Verified Purchase
Reading the boo, is very like listening to the film 'My fair lady's unfold. The dialogue and the stage direction unveils the story of Eliza Doolittle and Henry Higgins, she a flower girl, he a professor language phonetics. I was surprised how unlike the film, i ended up feeling sorry for Prof Higgins. He clearly thought a lot of Eliza, had grown accustomed to her but couldn't bring himself to submit to the restrictions of marriage. Reading the story of what happened after the play was as interesting and surprising. Great read
Read more
Report abuse

JP
1.0 out of 5 stars The book is a classic, but this publication has not been checked by anyone who cares about quality
Reviewed in the United Kingdom on 16 September 2019
Verified Purchase
This book is a poor translation by a person who is not a first-language English speaker. Or they used voice dictation software and did not check the results, but it was atrocious. The cut and paste errors didn't take much finding.
Read more
3 people found this helpful
Report abuse

Richard Mwangi
5.0 out of 5 stars Two Fingers Up The Establishment
Reviewed in the United Kingdom on 1 April 2016
Verified Purchase
A friend recommended that I read George Bernard Shaw since I am in the habit of quoting Shaw and possess a rabid disgust of hypocritical respectability and class conscious pigs. This is simply the best play I have ever read and thoroughly recommend it to bohemians, non conformists, phonetics professors, artists, scientists and all those with a virulent loathing of pretentiousness.
Read more
4 people found this helpful
Report abuse

Matt
4.0 out of 5 stars Brilliant storytelling
Reviewed in the United Kingdom on 16 December 2014
Verified Purchase
The classic story behind the Musical 'My Fair Lady' most people are aware of what happens in this book. However the ideas about class and identity are still being explored regularly by much less impressive books and TV.
The penguins classics brand is a very reliable presenter of stories in nice editions that sit well on any bookcase.
I would happily recommend this book to literature lovers or to those who know the musical but have never read it.
Read more
2 people found this helpful
Report abuse
See all reviews
Back to top
Get to Know Us
Make Money with Us
Let Us Help You
And don't forget:
© 1996-2022, Amazon.com, Inc. or its affiliates