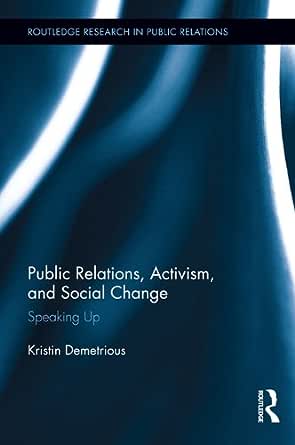 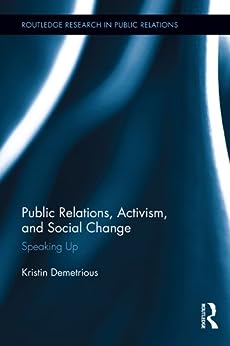 'This uncompromising book is a wakeup call to activists, PR people and academics. It overturns many, many apple carts by arguing that PR controls while its proposed replacement 'public communication' empowers. It will help activists to be more confident public communicators with the comfort of a neutral working title. This book will be attacked and praised in equal measure.' - Kevin Moloney, Bournemouth University UK and author of 'Rethinking PR: PR propaganda and democracy' 'Kristin Demetrious skilfully pulls together a range of questions of central importance for public relations scholarship. Her monograph explores power dynamics, discourse and ethics in relation to activism and public relations in the context of converged media and usefully blends a range of theoretical and disciplinary perspectives. Suitable for advanced level undergraduates and postgraduates, Public relations, activism and social change provides a rich mix of fundamental questions, challenging ideas and detailed case histories that get to the heart of public relations critique.' - Jacquie L'Etang, Queen Margaret University, UK 'Previously incorporated into corporate communication as if that's all it was, PR has passed a tipping point. As PR acknowledges its societal role beyond for-profit organisations, Kristin Demetrious restores activism to the centre of the field. Activists have always operated there but have rarely been acknowledged, let alone adequately researched. Demetrious not only does the research but does it by focusing attention on the PR issue that is bigger than Big Tobacco, climate change. Ignore this book at your peril - socially and theoretically, it will help define the future of PR at a critical time in the history of the planet.' - David McKie, University of Waikato, New Zealand 'A refreshing new perspective on public relations challenges the view that corporate PR in a pluralist society is consistent with democratic principles. Through three case studies of grassroots activist campaigns triggered by risk-producing industries, Demetrious' critical, interdisciplinary study proposes a new model of 'public communication' that considers the impact of communication not just on the marketplace but on society.' - Michaela O'Brien, University of Westminster, UK, for Times Higher Education (May 2014) "Kristin Demetrious recognises that there are politically benign and responsible forms of public relations, but this book presents a cogent critical examination of the underlying paradigm of positivism, the power relations, and the framework of neoliberalism which has characterised 20th century PR practice and offers a theoretically well-grounded and thoroughly-argued case for rethinking PR in the 21st century. I recommend this book as a 'must read' for all scholars and students with an interest in public relations and the public sphere." - Jim Macnamara, University of Technology, Sydney, Australia "Public Relations, Activism and Social Change provides insights into how public relations can be harnessed and adapted to create public and community awareness about an issue at hand and create dialogue to encourage people to adopt an idea, innovation, or issue that requires change. Through an analysis of three case studies, the author debates how and why manipulative approaches to public relations fail while more participatory and dialogic public relations succeed... Demetrious successfully builds her theory of public communication and justifies why it should replace conventional public relations" - Levi Zeleza Manda in Forum: Qualitative Social Research "Kristin Demetrious' book Public Relations, Activism, and Social Change: Speaking Up is a significant contribution to the small but growing critical communication literature on public relations. [...] richly informed, imaginative, and incisive." Sue Curry Jansen in International Journal of Communication