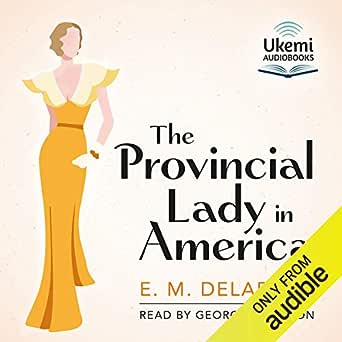 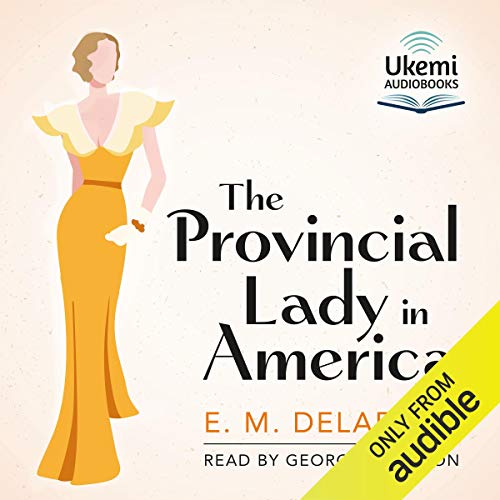 3.3 out of 5 stars
3.3 out of 5
5 global ratings
How are ratings calculated?
To calculate the overall star rating and percentage breakdown by star, we don’t use a simple average. Instead, our system considers things like how recent a review is and if the reviewer bought the item on Amazon. It also analyses reviews to verify trustworthiness.

shezza
5.0 out of 5 stars Brilliant
Reviewed in the United Kingdom on 21 July 2013
Verified Purchase
I loved the Provincial Lady and the Provincial Lady in London and this too was hilarious. I love the acerbic little comments. Can't wait to read the next one
Read more
One person found this helpful
Report abuse

Kindle Customer
4.0 out of 5 stars Humorous but not as good as the others
Reviewed in the United States on 27 December 2018
Verified Purchase
The publisher sends the author to tour America. Elizabeth describes with humor how she imparts this news to her family and neighbors.
By now, EM Delafield is famous, travels First Class, and is photographed as she disembarks the ship at New York. What follows after she sets foot on US soil is a series of whirlwind tours about the continent, and a trip to Canada thrown in. First published in 1934, the USA was in the throes of the Depression. But the people charged with accompanying EM Delafield about – literary and wealthy Americans – do not seem affected by this at all. From her Diary, it would seem that the author wasn’t even conscious of the dire circumstances millions of Americans were in. She was whisked from mansion to mansion, from party to party, had to get used to being constantly served cocktails (wasn’t this during Prohibition?) and of course had to put up with an occasional annoying bore. She is however bowled over by the friendliness and hospitality of the Americans, even if they do run her ragged with speaking engagements, outings, events and ‘must-sees’, including Haarlem. A trip to the Alcott House and Museum brought her the most joy. Her successful tour concluded, her publishers have purchased her a Tourist Class ticket home, which I thought rather cheap of them. It was a good book, and very amusing, but doesn’t match the ones that went before.

joan grant
1.0 out of 5 stars be careful
Reviewed in the United States on 18 September 2019
Verified Purchase
if you expect the conventional paperback. Something called Amazon Digital Services gets the copyright I guess and then what you hold is your hand is not the original smaller book but larger and without the cover illustration on the front and details (as comments on the book.}on the back.. I am holding Delafields delightful "Diary of a Provincial lady" with a full color cover with illustration vs. A brown and beige larger and thinner Amazon production - I bought several to give to friends. Should you not find a real original, suggest you buy a used one in good condition. Amazons' product may offer larger print if that is important; in this case it did not. Nor did it include the illustrations, just one of the author, not in the original..
Read more
Report abuse

Zeldie Stuart
2.0 out of 5 stars lazy day read
Reviewed in the United States on 16 April 2009
Verified Purchase
The Provincial Lady series are enjoyable easy reads for a day in the sun or just lazing in on sunday. or best before bedtime. Best of the lot is the first one "diary of a provincial lady" the rest just follow the same vein so it gets a bit too familiar.
Read more
One person found this helpful
Report abuse
See all reviews
Get FREE delivery with Amazon Prime
Prime members enjoy FREE Delivery and exclusive access to movies, TV shows, music, Kindle e-books, Twitch Prime, and more.
> Get Started
Back to top
Get to Know Us
Make Money with Us
Let Us Help You
And don't forget:
© 1996-2020, Amazon.com, Inc. or its affiliates