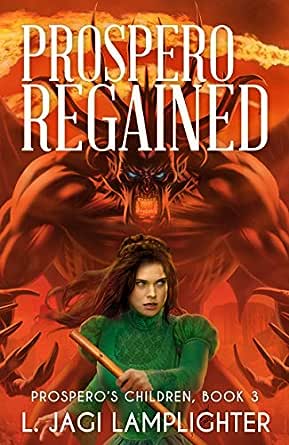 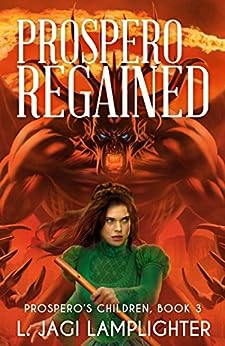 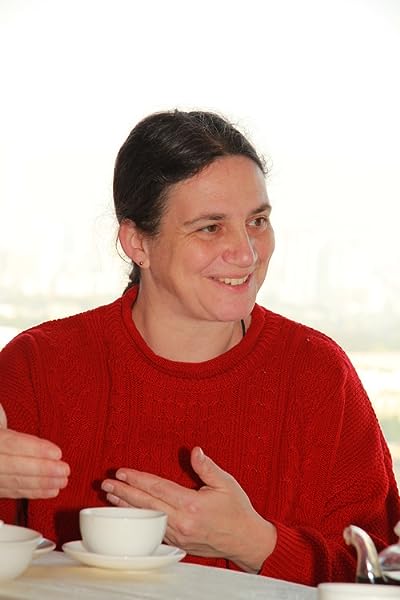 L. Jagi Lamplighter -is also the author of the Prospero's Daughter series: Prospero Lost, Prospero In Hell, and Prospero Regained. She is an assistant editor with the Bad-Ass Faeries Anthologies. She is also a founding member of the Superversive Literary Movement and maintains a weekly blog on the subject. When not writing, she switches to her secret identity as wife and stay-home mom in Centreville, VA, where she lives with her dashing husband, author John C. Wright, and their four darling children, Orville, Ping-Ping, Roland Wilbur, and Justinian Oberon. Her website is: http://www.ljagilamplighter.com/ Her blog is at: http://arhyalon.livejournal.com/ On Twitter: @lampwright4 --This text refers to an alternate kindle_edition edition.

5.0 out of 5 stars
5 out of 5
9 global ratings
How are ratings calculated?
To calculate the overall star rating and percentage breakdown by star, we don’t use a simple average. Instead, our system considers things like how recent a review is and if the reviewer bought the item on Amazon. It also analyses reviews to verify trustworthiness.

A. Karamazov
5.0 out of 5 stars A Superb Story that more than Delivers on the Promise of the First Two Books
Reviewed in the United States on 2 July 2020
Verified Purchase
The Prospero’s Children trilogy is a superb story that hits true at every point. It has enough action to hold reader interest, but doesn’t fall into the non-stop action rut of many adventure stories. There are down times in which the reader can relax with the characters and get to know them – and also get to know the fascinating world in which the story takes place: our own world, but seen through a fantasy-tinted lens that brings out the potential for finding the fantastic in even mundane life. The story is sprinkled with laugh-out-loud humor, but always in ways that doesn’t undermine the drama. In other words, it’s funny not because the characters are intentionally comic or snarky (though, admittedly, Erasmus has a sardonic wit that generates laughs and painful flinches in equal measure) but because, as they discover truths about themselves and each other, we unexpectedly see facets of our own foibles exposed. And to cap it off, this final book ties everything together at the end, not in a fairytale happily-ever-after sense, but in the sense that the motivations driving the characters are understood and, in hindsight, make the mysterious twists and conundrums of the path to get there seem perfectly logical in retrospect.

This tying together of threads requires some venturing into theology via a quest through the infernal realms. For some folks that may be a negative. For others, like myself, it deepens the story. Religious belief – including atheism, which is still a reaction to religious pondering – is part of the human experience, and a story that takes that into account (as opposed to ignoring it, or introducing a cardboard cutout religious fanatic villain) is a story that has greater reality and depth. And don’t worry about slogging through academic sidelines. It’s all still very much an entertaining adventure. Besides, with there being elves, magic staves, elemental spirits, talking animals, and the like, it can hardly be textbook theology. Yet, if you do think about it afterwards, none of it bluntly contradicts orthodox views.

Because the threads of this story are so deftly and cleverly tied up at the end, I’m even more enthused about the very entertaining Rachel Griffin young adult series that Lamplighter is currently writing. There are features in the early books of that series which I saw as minor flaws in the plot logic, but which I may yet, in the finale, be enlightened to see as inevitable twists in the path.

B. K. Martin
5.0 out of 5 stars Great trilogy, Highly recommended
Reviewed in the United States on 12 January 2017
Verified Purchase
Lamplighter's Prospero trilogy is brilliant. I've read the series several times, and I like it better every time. If you liked Shakespeare's Tempest, then this series, which follows up on his story to the present day, and includes Lamplighter's backstory preceding the Tempest, will surely please. The richness of Lamplighter's imagination is stunning. Thoroughly enjoyable.
Read more
Report abuse

Have you ever experienced a connection physically, an awareness of a `felt center' or inner core that connects with a matching/mirror inner core of a person or `thing' in the outer world? If you haven't, you soon will by reading the Prospero Trilogy by L. Jagi Lamplighter. If ever there was a literary weaving of faith, hope and love (and a great deal of intelligence, adventure and fun, besides!), it resides in these volumes. The tapestry of plot and character and unique style wraps around the reader's body taking the shape of a circle. Then, abundant connections are made as we read, not only between our inner core, the characters in the books, but nature itself. We feel supported by this circle in our life and in our world. Aeons of history are lovingly contained in this series. To believe in the genius of L. Jagi Lamplighter is simply to believe in one's own authenticity, in one's own mythology, as her character's all come to do. This new life, though very powerful is also fragile. Transition is process and a work with a process, and one must trust the divine force within it. For me, L. Jagi Lamplighter has created a `multi-verse' that we can all fit into and believe in. A multiverse of faith in "Prospero Lost", of hope in "Prospero in Hell", and finally of love in "Prospero Regained". This is an unbroken sacred hoop of literature. What more could anyone ask for, except, when is the next series coming out!? Live long and `Prospero', indeed, L. Jagi Lamplighter!
Read more
3 people found this helpful
Report abuse

R. Floyd
5.0 out of 5 stars A Fitting End
Reviewed in the United States on 30 April 2013
Verified Purchase
A fitting end to an unexpected and delightful fantasy series. Lamplighter does a masterful job of blending history, classical literature and mythology, but what really makes this series work are the characters. In some ways Prospero's Children are more like Zelazney's Courts of Chaos than anything else in fantasy.
Read more
One person found this helpful
Report abuse

Hawk
5.0 out of 5 stars Truly excellent series
Reviewed in the United States on 15 May 2017
Verified Purchase
I've now read all of Jagi's books. All are top notch. The Prospero series are very satisfying. Can't wait to see more..
Read more
Report abuse
See all reviews
Get FREE delivery with Amazon Prime
Prime members enjoy FREE Delivery and exclusive access to movies, TV shows, music, Kindle e-books, Twitch Prime, and more.
> Get Started
Back to top
Get to Know Us
Make Money with Us
Let Us Help You
And don't forget:
© 1996-2020, Amazon.com, Inc. or its affiliates